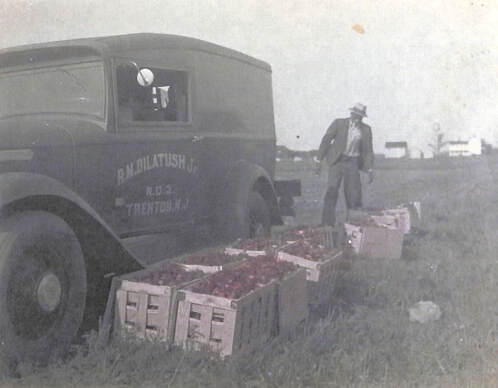 Tomato Harvest at Dilatush Farms
Before European settlement dominated the region, West Windsor was heavily wooded and inhabited by the Lenni Lenape who established trails along the region's main inland waterways. However, the encroachment of settlers from across the Atlantic, especially after 1682, resulted in deforestation to make way for agriculture.
​
West Windsor, like much of the Garden State, has always had excellent soil, good drainage, an abundant supply of water, and a moderate climate. It is not surprising that the settlement of the region produced productive farms, many of which still exist to this day and constitute a collective reminder of West Windsor's deeply-entrenched agricultural heritage. 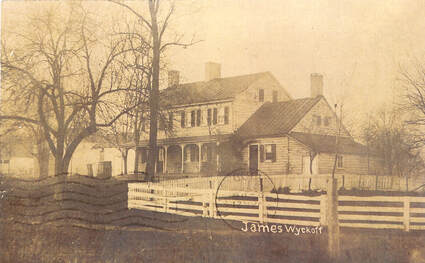 Ladyfaire around 1909
In 1693, William Penn purchased a 6,500 acre tract east of the Stony Brook River, extending from Assunpink Creek to the Millstone River in the north. Four years later, a New York City goldsmith named David Lyell acquired another large tract of perhaps 4,500 acres immediately to the east of Penn's. In the northwestern and southwestern portions of the township, a number of smaller grants, all less than 1,000 acres, were acquired by other proprietors. Over time, these farming families - the Schencks, Covenhovens, Bergens, Voorhees, and many more - have grown to dominate the annals of West Windsor history. Many of their farms still exist to this day.

These land purchases eventually turned West Windsor into an agricultural machine. The township's agrarian businesses were diverse, producing an abundance of fruits, vegetables, animals, and animal products. In 1748, the Finnish naturalist Peter Kalm remarked after travelling through Penns Neck on his way from Trenton to Princeton: "Near almost every farmhouse has a spacious orchard full of peaches and apple trees in such quantities to cover nearly the whole surface. Part of the fruit they left to rot, since they could not take it all in to consume it. Wherever we passed by we were always welcome to go into the fine orchards and gather our pockets full of the choicest fruit without the possessor so much as looking after it. Cherry trees were planted near the farm on the roads."

The Walker-Gordon Dairy Farm
At the beginning of the 1800s, many of West Windsor's farms primarily produced grain, but the chartering of Brunswick Pike in 1804, the excavation of the Delaware & Raritan Canal in 1834, and the completion of a line of the Camden & Amboy Railroad in 1839 brought a dramatic shift. Access to New York and Philadelphia and the consumers therein brought about different types of farming - from produce to meat to dairy products. After 1900, dairy and poultry became especially widespread, and potato farming and sheep and cattle raising, too, after World War I.

While one of the region's most famous agricultural businesses - the Walker-Gordon dairy farm of Plainsboro (across the Millstone River from Washington Road) - was not located within our township's borders, West Windsor played a crucial role in its success. The mill at Grovers Mill, operated by Charles L. Dey until its closing in the 1940s, ground meal for the farm. In addition, a prominent farmer named Max Zaitz, who owned hundreds of acres of land in the township and, in cooperation with his brother, ran a cattle business that stretched out to the Midwest - coordinated a cattle trade with the farm. Our famous bovine resident, Elsie the cow, was reputedly originally a Zaitz cow!
​
Below is a  map of West Windsor showing the township from 1959. Note the abundance of farmland! 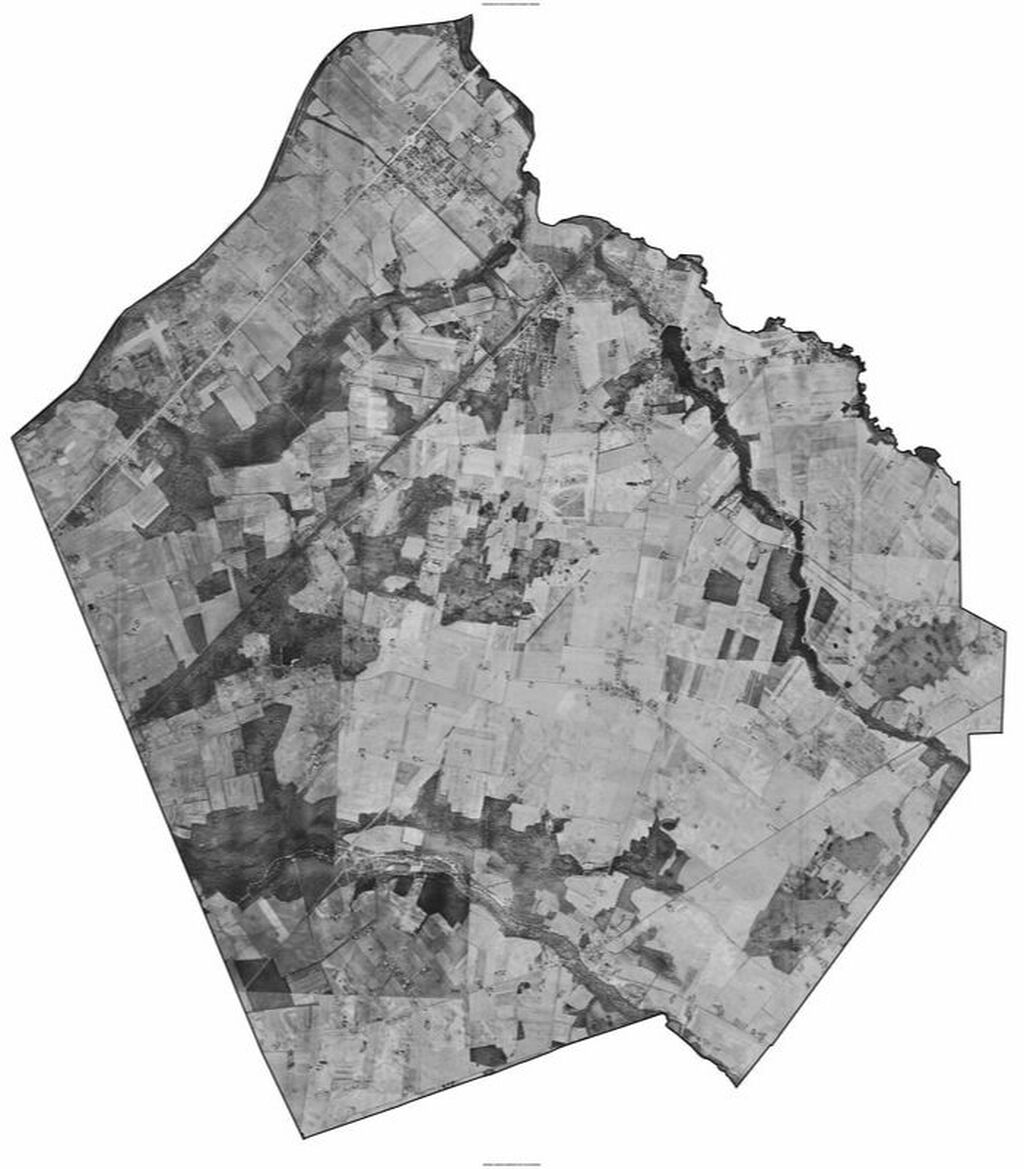 Farming continued to dominate West Windsor until the end of the 20th century, creating a uniquely bucolic atmosphere until as late as the 1980s. Despite the development of a train station in the mid-1800s and a surge in population in the 1920s and 1940s, agriculture still dominated, albeit shifting slightly to sod production in response to suburbanization. Even in 1960, 65 percent of the township's land was still devoted to agriculture.

However, since then, these farmlands, and even a few of West Windsor's historic villages, have been bulldozed to make way for to ever-more residential and commercial development, starting with a major population and housing development boom in the late 1900s. Since 1980, the township has nearly quadrupled in size - from around 8,500 residents to nearly 30,000 in 2019. With this dramatic growth came an unprecedented topographical change - particularly around the central and western parts of the township. Aerial views from the 1950s and earlier show an entirely alien landscape, particularly around Quakerbridge Road and Brunswick Pike.

Fortunately, also in the late 1900s, parallel to the creation of West Windsor's "Green Belt" - a township-wide wildlife conservation scheme - the municipality adopted into its master plan a philosophy of agricultural and open-space preservation. In the 1960s and 70s, over 2,200 acres of land was purchased for the development of Mercer County Park. Even more substantially, over 8,300 acres of open space and recreational land calls the township home.

The Historical Society of West Windsor was established in 1983 to memorialize the township's unique history. Finally, in the mid-1990s, a movement to protect West Windsor's open spaces and rural heritage developed, and the Friends of West Windsor Open Space was formed. To this day, thousands of acres of farmland are legally preserved, ensuring that at least an echo of the township's agrarian heritage continues to be appreciated and utilized by generations to come. In addition, dozens of centuries-old farm houses still dot the township, as listed on the Historic Sites Index.

​Below is an interactive 2010 map of said farmland, then totaling 3,695 acres:
Particularly expansive are the stretches of farmland along Trenton Road (west of Village Road East), Clarksville Road (near its intersection with Quakerbridge Road), Washington Road (west of its intersection with Brunswick Pike), and Line Road. The middle two of these parcels are being considered for further development, however. In Penns Neck, the Washington Road farmland - once known as the Jewell Farmstead, and the Garret Schenck farm before that - is being considered for a new campus for Princeton University. Meanwhile, the Clarksville Road stretch - owned by the Howard Hughes Corporation (HHC) - and before it, American Cyanamid - is one of West Windsor's most hotly contested areas, with plans by the HHC to turn it into a massive residential and commercial center.

At the Schenck Farmstead, thousands of artifacts - from hand tools to tractors - are housed in and around our 1700s-era barn. The fields surrounding the museum complex are still farmed and protected as open space - an oasis amidst the flurry of development of the last 40 years. Take some time off to explore this complex, visit West Windsor's weekly farmer's market, and enjoy local farm products at the Tindall and Appleget farms, and you might just experience a semblance of a much quieter, bucolic West Windsor. ​​
Play the slideshow below to explore more of West Windsor's agrarian history!