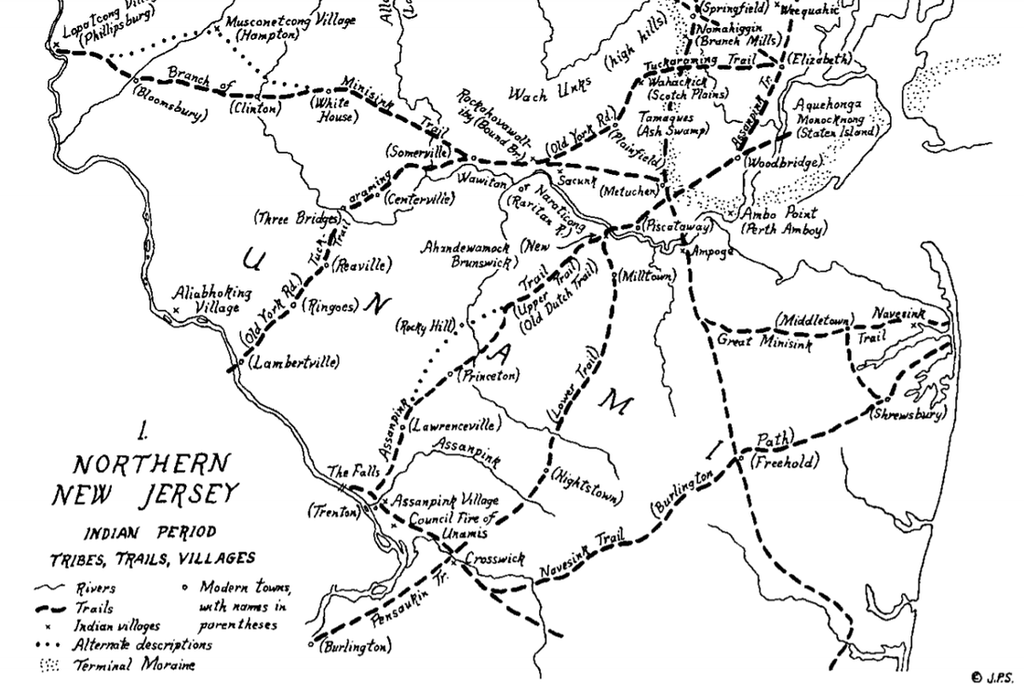 The origins of West Windsor’s footpaths, now mostly disappeared due to the ravages of time, date back to its earliest settlement by the ancestors of the Lenni Lenape. These paths tended to only accommodate foot traffic, as neither wheel nor horse was present on the continent until European incursion.

One of the most famous is the Assunpink Trail, which derives its name from the Algonquin word Ahsën'pink – meaning “stony, watery place.” This trail existed between the Delaware River in south and the Raritan River in the north. Throughout its existence, it has been developed by European settlers and their descendants. The trail-turned-roadway system served as a route linking Philadephia and Perth Amboy. George Washington used the trail during the American Revolution. Names attributed to it have been the Old Dutch Trail, The King’s Highway, Lincoln Highway, and, as of 2019, Route 27.
​
It was not until well into European settlement that a formal road and footpath system was established to connect villages to one another. Rather, paths likely led to preferred hunting grounds or temporary establishments, as the Lenni Lenape was a cluster of nomadic tribes. Europeans later adopted these footpaths where convenient and constructed new ones to suit their needs. 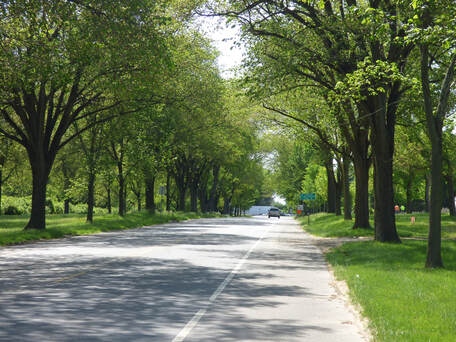 Before permanent avenues were constructed in the mid-1700s to allow for heavy traffic, transportation routes were generally restricted to trails (many built by the Lenni Lenape) for short distances and waterways (such as the Delaware or Raritan Rivers) for long distances. As much of New Jersey was forested, early settlers in the 1620s and 1630s focused less on building a road system than clearing their immediate vicinity. Even up to the 18th century, water continued to be used as a primary means of transportation, and roads tended to branch out of towns to sites in their immediate vicinity (such as mills), rather than connect towns to one another. Footpaths were gradually widened to accommodate traffic.

Early colonial governments delegated responsibility of road planning and construction to individual counties. Local commissioners oversaw the alignment and location of roads, often laid not only according to end destinations but also to property boundaries and topographic limitations.
​
Two classes of roads were quickly established: major avenues that linked important towns, requiring significant planning, and local roads that, due to topographic limitations, were difficult to establish and maintain. For this latter class, township and county funds and resources were often inadequate to address these routes; thus, higher levels of government were called upon to assist.

Up until the mid-1700s, roads remained primitive and in little use. Seasonal conditions often restricted travel and water routes continued to prove quicker and more reliable. Horses could travel on and off footpaths. Even sleds were used on frozen rivers decades before stagecoach travel, which required constantly-maintained roads, became popular in central New Jersey in the middle of the 18th century.

Many of the town’s earliest road names indicate their origins. For example, Quakerbridge Road, perhaps West Windsor's earliest planned road, was built along the Keith Line - a line that was drawn in 1687 to demarcate East and West Jersey. Province Line Road nearby partially follows that line as well. 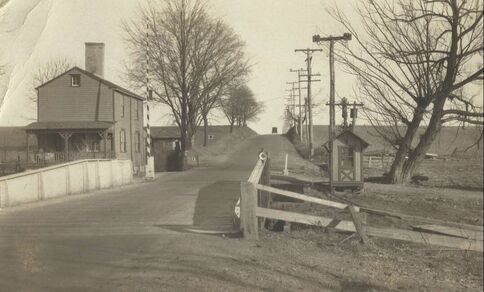 Washington Road Bridge over the D&R Canal with Bridge-tender's house and shanty, looking west.
In addition to the aforementioned avenues, Princeton-Hightstown Road, Clarksville Road, Edinburg Road, Line Road, Harrison Street, and Village Road (now split into “East” and “West”) are also among the township’s oldest, and were all established during the eighteenth century.

The first records of construction of Princeton-Hightstown Road date back to 1744, linking Hightstown and much of Windsor Township with Old York Road, and in turn, Perth Amboy (then the seat of Middlesex County), Burlington, and New Brunswick. In 1759, this route was extended to the newly-constructed mill at Grovers Mill. Soon after, it was linked with Cranbury Neck Road and Allentown-Princeton Road. In 1808, the final segment, now known as Washington Road, was established, connecting Penns Neck with the rest of the township.

In 1749, Harrison Street was established to link Queenston with a gristmill at Mapleton, now known as Aqueduct. This road was later extended to span Plainsboro and end in Cranbury.

In 1754, a route linking Princeton with Allentown was built. This extended the already-established Allentown-Trenton route as far as present-day Robbinsville, then the Robbinsville-Edinburg Road to Edinburg. Directly past Edinburg it veered sharply to the north, then again, past Princeton-Hightstown Road, rerouted towards Aqueduct, where it linked up with Harrison Street. Part of this much-disappeared route still exists as Edinburg Road, which turns into Windsor-Edinburg Road south of Edinburg.

In 1765, Line Road (now forming a portion of the boundary between West Windsor and Robbinsville) was constructed. Two years later, a road directly linking Dutch Neck to Hightstown (now Dutch Neck Road) was established in what is now East Windsor but was eventually replaced by Village Road.

In 1771, Clarksville Road was surveyed, showing a connection between the West Windsor hamlets of Grovers Mill and Clarksville. 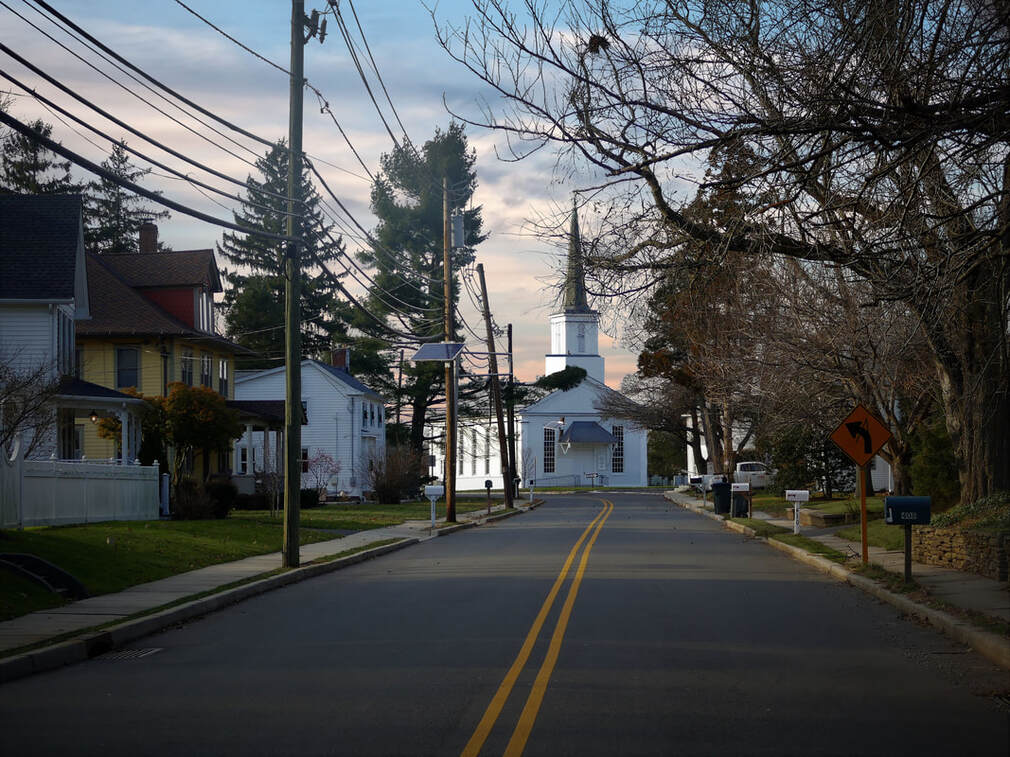 Village Road East in Dutch Neck
The Brunswick Turnpike was chartered in 1804 to straighten out preexisting dirt trails and  is now part of the larger Route 1 system.  It runs through Windsor Township, linking it to a wider chain of townships. This provided a boon for West Windsor, allowing for significantly shorter inter-town travel, and with it, expedited transportation of goods and services. A hotel was constructed in 1807 where the turnpike intersected Quakerbridge Road, which prompted the blossoming of the village of Clarksville. In addition, the Red Lion Inn and subsequent Princeton Baptist Church, both built on the turnpike, prompted the expansion of Penns Neck.

Despite its utility, the pike was not a pleasant avenue on which to travel. The Straight Pike, as it was known during its early years, was a bumpy, dusty road during the summer, and in winter became so gouged by wagon wheels and hoof prints that travel was virtually impossible. The highway was known as the worst in the state and taxes on owners of property adjacent to the pike did nothing to remediate this situation.

In "Old Princeton's Neighbors," published in 1931, an anecdote helps paint a picture: "L. Beaumont Reed recalls that his grandfather told him that once, when he was taking a load of hay into Trenton, he was so angry about the condition of the road that he lashed his mules when the tollkeeper opened the gate at Baket's Basin and refused to pay the 10-cent fee. Just beyond the tollgate was a deep rut in the road, where his hay fell off into the mud."

Conditions only deteriorated during the second half of the 19th centuy. In the 1890s, the Pennsylvania Railroad, facing protests across the region, ceded the turnpike to Mercer County, with the proviso that no street cars or stagecoaches be allowed to use the road. Obviously, that stipulation has long become obsolete.

​   An interactive, early 1800's map of the turnpike is shown below:
It was not until the early 1800s that a nationwide effort to establish a continental road system was adopted. In 1807, then-Secretary of the Treasury, Albery Gallatin, lobbied for funding but was ultimately shut down. Five years later, British blockades during the War of 1812 incentivized the construction of national routes to streamline military movement.

The 1875 Everts & Stuart map of the township shows the avenues constructed between 1849 and 1875 (as they are named today): Meadow Road (some time between 1849 and 1860), Logan Drive (now Eden Way, an abandoned dirt road off South Harrison Street), Millstone Road, Conover Road, Bear Brook Road, Cranbury Road (between Grovers Mill and Princeton Junction), and Penn Lyle Road (This last road being named after two of West Windsor's first landowners: William Penn and David Lyell). This map, in comparison to the 1849 map, also shows an extension of Village Road east of Old Trenton Road, as well as significant rerouting of Alexander Road at its intersection with North Post Road. In addition, the map shows a map that used to run parallel to and east of South Post Road, linking Princeton-Hightstown Road and Village Road East. This old farming road no longer exists.

In the 20th and 21st centuries, numerous changes occurred in reaction to the township’s expanding population. Princeton-Hightstown Road was straightened along what is now Hendrickson Drive (previously the route that Princeton-Hightstown Road took). Clarksville Road was straightened west of its intersection with North Post Road. Cranbury road was rerouted near its entrance into Plainsboro. South Post Road was shortened to make way for construction of Mercer County Lake in the 1970s. Also constructed were hundreds of roads associated with numerous housing and commercial developments after World War II.

In addition, as car became king across the United States in the 20th century, the macadamization of West Windsor's roads followed suit. The larger avenues of the township - such as Brunswick Pike and Princeton-Hightstown Road -  were among the streets most in need of pavement, as they were the most heavily traveled. Following the laying of asphalt, these boulevards were able to accommodate more frequent and heavier traffic. Smaller roads in the township were paved throughout the 20th century, some as late as the 1990s. A few gravel paths still exist in the township, such as Joanne Street and Stobbe Lane near Grovers Mill.

Another major change to the township's road landscape concerned its context. Prior to the last major population boom in West Windsor, starting in the late 1980s and continuing to today, a much larger percentage of West Windsor consisted of farmland, which could be seen along almost every avenue. Now, much of this once-agrarian land has been developed for commercial and residential use - perhaps most notably along Brunswick Pike. Below is a slideshow showcasing that road in 1962. No doubt our reader will be jealous of the lack of traffic and the sweeping vistas! 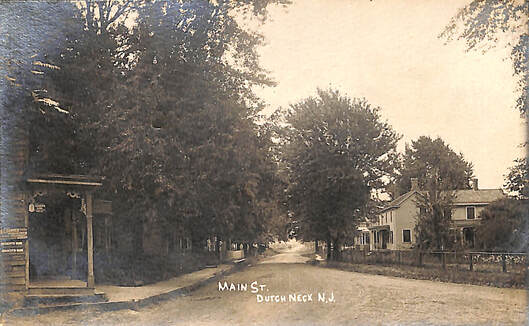 Looking down Village Road East in Dutch Neck
In the late 20th century, overpasses were constructed over the Northeast Corridor train tracks at previously at-grade intersections which, with the growth of the township’s population, were proving to be increasingly dangerous. The roads that were affected were Clarksville Road, Alexander Road, Quakerbridge Road, and Princeton-Hightstown Road.

In late 1996, Province Line Road was rerouted south of Port Mercer. It had previously joined with Quaker Road on the Princeton side of the hamlet.

Also recently were the rerouting of Edinburg Road at its intersection with Village Road East, the straightening of Princeton-Hightstown Road east of Southfield Road, the construction of New Village Road around the turn of the 21st century.

Comparison to early maps of the township reveal where intersections used to be located and the dramatic changes this construction manifested – such as the rerouting of Princeton-Hightstown road over the railroad tracks north of the train station, or the complete disappearance of certain sections of Alexander Road west of the tracks.

Meadow and Bear Brook Roads were rerouted in the 2000s to accommodate traffic with the growth of the township. Also in the 1990s, what were formerly at-level intersections crossing Brunswick Pike within West Windsor were converted into overpasses at Alexander, Quakerbridge, and Meadow Roads. These intersections, formally orthogonal, showcase a gradual curvature along their incline that deviates from their previously straight paths. Buildings such as Penns Neck School were torn down to accommodate these new overpasses.

Today, West Windsor is home to hundreds of roads, many built within the last few decades as the township has rapidly suburbanized. Many of the older roads have been broken up by development and other land appropriations. However, a careful perusal of aerial views of the township, and comparison of the present-day with old maps, can reveal where the oldest roads still lie, and used to exist.

Scroll down to compare the 1849 and 1875 maps to today's West Windsor! Note the changes in the township's western and northern boundaries. Use the buttons on the bottom right to zoom in an out and double-click on the maps to return them to their original sizes. ​
1849 J.W. Otley & J. Keily map
1875 Everts & Stuart Map
Current map of West Windsor