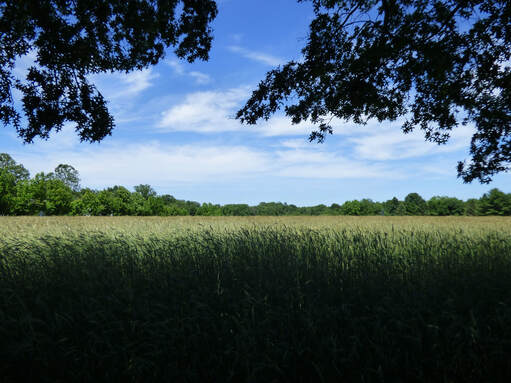 Before European settlers settled in the region, West Windsor was heavily wooded and inhabited by the Lenni-Lenape Native Americans who established trails along the region's main inland waterways. However, the encroachment of European settlers, especially after 1682, invited deforestation to make way for agriculture.
​
West Windsor, like much of the Garden State, has always had excellent soil, good drainage, an abundant supply of water, and a moderate climate. It is not surprising that the settlement of the region produced productive farms, and, horrifyingly, slave labor. In the 1800s, these farms - producing primarily grain -  were split into smaller tracts, but the development of the canal and subsequent access to New York and Philadelphia in 1834 incentivized different types of farming - from produce to meat to dairy products. After 1900, dairy and poultry became especially widespread, and potato farming after World War I.

West Windsor's resistance to suburban development until around 1980 is unique in the region. Despite the development of a train station in the mid-1800s and a surge in population in the 1920s and 1940s, agriculture still dominated, albeit altering slightly to prefer more sod production to respond to suburbanization. Even in 1960, 65 percent of the township's land was still devoted to agriculture.

Below is a composite map made up of 112 aerial photographs of West Windsor from 1930:

However, since then, these farmlands, alongside untouched land, have been ceded to ever-more residential development. Moreover, since the end of WWII, hundreds of historic houses and tens of thousands of acres of farmland have been lost to the ravages of time and suburban development.  In response, and in parallel to larger national environmental and preservationist trends, the municipality developed its "Green Belt-" a nearly unbroken network of preserved wildlife areas - both riparian and forested. In the 1960s and 70s, over 2,500 acres of land was purchased for the development of Mercer County Park. The Historical Society of West Windsor was established in 1983 to memorialize the township's unique history. Finally, in the mid-1990s, a movement to protect West Windsor's open spaces and rural heritage developed, and the Friends of West Windsor was formed.

​   Today, West Windsor is a rapidly-growing commuter town of roughly 30,000 residents. Despite encroaching development, much of the township's farmland is now legally preserved, and its commitment to providing substantial regions for the protection of flora and fauna are one of the municipality's fundamental governing philosophies. As a result, although many historic buildings and farmlands are now lost forever, many do remain to be appreciated by residents and passersby alike.

In addition, the Historical Society of West Windsor has been hard at work to preserve the documents and artifacts that constitute our township's history. Navigate to the "Research & Archiving" web page to learn more!

Below is a composite preservation plan depicting the various types of private and public ventures to preserve a myriad of locations within West Windsor:
​