West Windsor's municipal boundaries and legal identity are the result of hundreds of years of development that began in the seventeenth century and culminated during the mid-nineteenth century. In order to fully understand the context of the township's formation, it's necessary to briefly explore the evolution of New Jersey's internal boundaries as well.​ 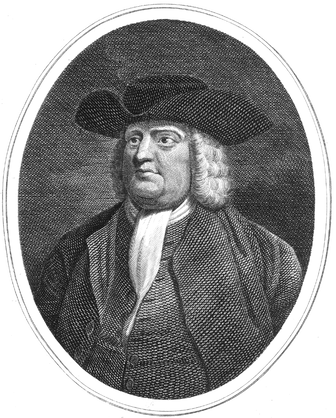 ​ Although Europeans began to settle in present-day New Jersey in the 1620s, it was not until 1664 that boundaries vaguely recognizable to today's cartographers began to manifest. It was during this year that Charles II, King of England, granted the region to James II, Duke of York. Subsequently, the Duke leased this tract to John Berkeley and Sir George Carteret, who created the colony of "Nova Caesarea-" or New Jersey.

However, financial troubles of Berkeley and Carteret led Berkeley to sell his share of the colony to Quaker John Fenwick, in trust for Edward Byllynge, on March 18, 1673/74. They, too, fell into debt, whereupon they sold parts of their shares so that Fenwick retained one tenth, and Quakers William Penn, Gawen Lawrie, Nicholas Lucas and Byllynge became the owners of the rest. Desiring to develop a Quaker colony in western Nova Caesarea, the Quakers entered into a "Quinpartite" deed with George Carteret on July 1, 1676, dividing New Jersey into East and West Jersey. The lands that now constitute West Windsor were located in the former half.

Six years later, William Penn signed a peace treaty with the Lenni Lenape, after purchasing the eastern half of New Jersey from Cartaret the year prior (he also would purchase the western half a decade later). While the subsequent surge of Europeans into the New World would spell profit for settlers, it was the beginning of violence and disease for the natives, despite Penn's Quaker-informed aspirations.

Despite the 1676 treaty, it was not until 1687 that a "province line" was actually surveyed (albeit off from the terms of the 1676 treaty, leading to legal ambiguity that would last until 1743). George Keith was hired to run this demarcation from what is now Long Beach in Little Egg Harbor to a point on the Delaware River in Sussex County. This line (the "Keith Line") forms much of the southwest border of present-day West Windsor, at Quakerbridge Road. East Jersey was assigned to Carteret and West Jersey to a group of Quakers, led by William Penn, who, along with 11 associates, was to soon own the entire state.

It was not until 1702 that East and West Jersey would reunite, when Quaker charters were surrendered to the British. 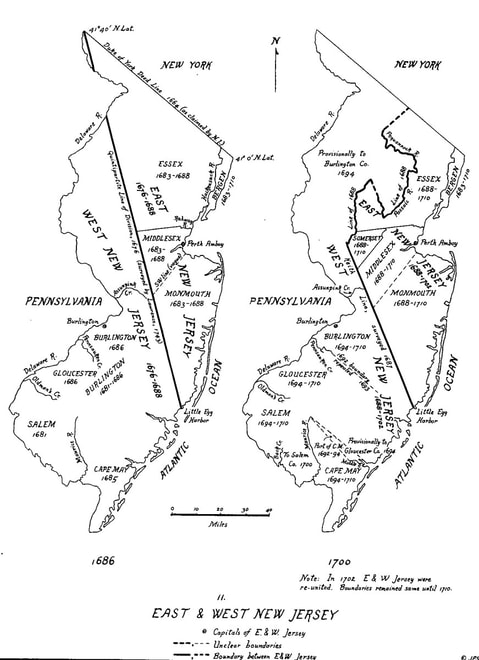 From "The Story of New Jersey's Civil Boundaries 1606-1968." Click on image to download!
A Tale of Five Counties


1675 marked the earliest attempt at county organization. On November 13 of that year, the state legislature enacted that "Bergen, and the adjacent Plantations about them, to be a County...Elizabeth-Town and Newark to make a County...Woodbridge and Piscataqua (Piscataway)  to be a County...(and that) The two Towns of Nevysink (Middletown and Shrewsbury) to make a County." Seven or eight years later, in March of 1683, the General Assembly of East Jersey established the four counties of Bergen, Essex, Middlesex, and Monmouth (albeit with vague boundaries), with their respective towns listed above. It was in Middlesex County that West Windsor would find its origins.

On May 14, 1688, Somerset County was established, splitting off from Middlesex. Five years later, on October 31, 1693, East Jersey (haphazardly) succeeded in formalizing the designation of towns and townships, where they had failed to do so eighteen years prior. In addition to the seven towns above (which were made into townships), "Hacksack" (Hackensack) in Bergen, "Acquickanick" and "New Barbados" in Essex, Freehold in Monmouth, and "Perth-Amboy" in Middlesex were established. Somerset County was not subdivided; rather, it was henceforth considered a township.

Also in 1693, William Penn purchased a 6,500 acre tract east of the Stony Brook River, extending from Assunpink Creek to the Millstone River in the north, from the Proprietors of East Jersey. This was all land in West Windsor west of present-day Penn-Lyle Road (constructed in the 1860s) and north of the Assunpink Creek. Around the same time, New Jersey governor Andrew Hamilton purchased of all land north of the Assunpink and east of present-day Penn-Lyle Road from the same proprietors. Four years later, a New York City goldsmith named David Lyell purchased most of Hamilton's tract. The boundary between these two tracts - a straight line from the mouth of Big Bear Brook on the Millstone River to Assunpink Creek in the south - is still partially demarcated today by Penn Lyle Road (constructed in the 1860s), named after these two early land owners. A series of less substantial land acquisitions - each smaller than 1,000 acres - took place following Penn's and Lyell's purchases. Line Road, demarcated by some of the southernmost land purchases, still marks part of the township's southern boundary. 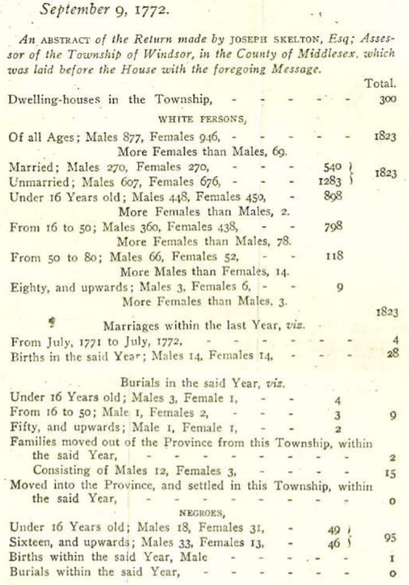 The land that would become West Windsor lay within Piscataway Township (the portion of Middlesex County south of the Raritan River) until 1724, when New Brunswick Township was formed, encompassing all of the territory of present-day New, North, South, and East Brunswick, East and West Windsor, and Robbinsville. In December of 1730, the New Jersey governor issued a charter for a "city" of New Brunswick, but the description contained therein stopped at the Millstone River - the present northern boundary of West Windsor - leaving every portion of Middlesex County south of it without a government.

Thus, New Windsor, named after Windsor, England, was created. First referred to as "New Winsor" in the April, 1731 Middlesex County court minutes, this township consisted of present-day Princeton (only east of Nassau Street, however), West Windsor, and East Windsor, encompassing an area of a little over 65 square miles. Although it was hardly populated at the time of its incorporation (in 1772, Joseph Skelton, tax assessor for the town, estimated that only 40 farms existed in New Windsor in 1733), and the late 1600s/early 1700s land grants still largely remained in the families that had originally received them, the West Windsor portion of New Windsor would soon experience a series of land purchases from the descendants of William Penn (in 1737) and David Lyell (mid-1700s) that brought much settlement. Perhaps as a direct consequence, on March 9, 1751 (written as "1750" in what was then still the Julian calendar year), two decades after New Windsor's informal creation, "Windsor Township" was incorporated.

Over the next four and a half decades, Windsor (which would also often colloquially be called "New Windsor" until the end of the century) grew and matured into a thriving farming village. In 1772, New Jersey conducted a population census, showing that Windsor now had around 1900 residents and 300 homes - a large jump from the estimated 40 homes thirty nine years prior. Twelve years later, in 1784, 2,418 people lived in the township. It was six years later, in 1790, that the first Federal census was conducted, showing Windsor's population to be 2,838. 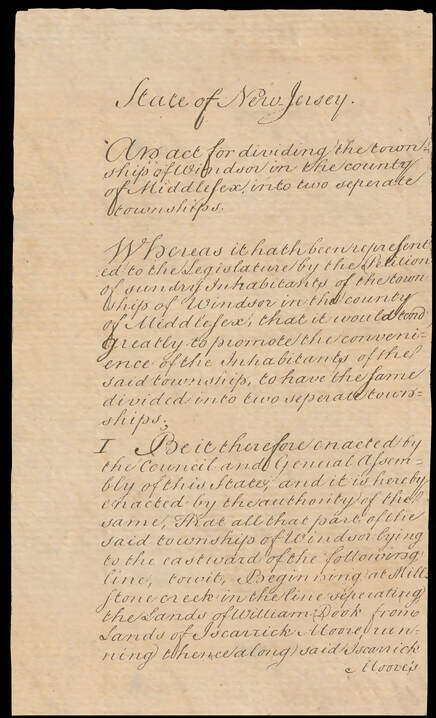 In the mid-1790s, a movement began to grow within Windsor to split the township, fueled partially by political animosity between the western (Princeton-centered) and eastern (Hightstown-centered) parts (largely centered around road upkeep), and partially by the sentiment that this once-small town had grown too large. Thus, after a few years of petitioning, Windsor was no more.

By an act of state legislature initiated on February 3, 1797, and finalized on on February 9 of that year, Windsor was split into two halves. Thus, East Windsor and West Windsor were formed. The former township also contained virtually all of present-day Robbinsville. Meanwhile, West Windsor still contained the aforementioned portions of Princeton southwest of the boundary at Nassau Street, and had developed/would develop several villages: ​Aqueduct, Clarksville, Dutch Neck, Edinburg, Grovers Mill, Penns Neck, Port Mercer, Princeton Junction, and Queenston (although Aqueduct, Clarksville, and Queenston were to be lost to border shifts and time).

The original articles of formation of the township of West Windsor are adjacent. They contain some interesting items, including references to: ​
​This first meeting was hosted in Jacob's house (now colloquially known as "Widow Bergen's Tavern") on April 8, 1797, serving as the first annual meeting that would kick off town governance for hundreds of years to come. This meeting secured the election of offices - many holdovers from positions created in King George II's 1750 establishment of Windsor. The next meeting, on June 3, 1797, established a transition procedure for West Windsor's separation from the old Windsor township. 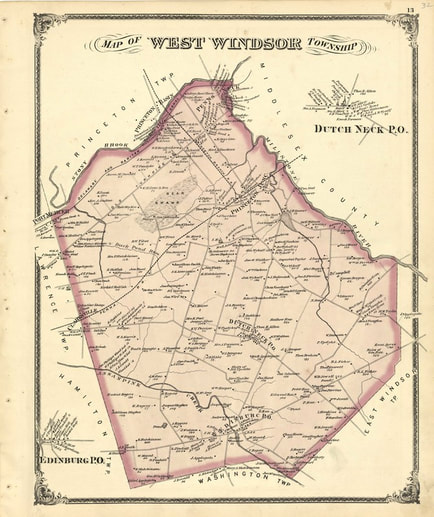 While West Windsor largely retains its 1797 boundaries east of the D&R Canal, it lost significant portions of land during the early-mid 1800s.

In 1813, Princeton Borough was incorporated, splitting off land from West Windsor Township. Twenty five years later, on February 22,  1838, West Windsor was reapportioned to Mercer County upon its creation that day. The same act also carved Princeton Borough out of West Windsor - the first of three major land transfers (the others in 1843 and 1853) that collectively pushed West Windsor's western boundary to the eastern bank of the Delaware and Raritan Canal. West Windsor's boundaries have stayed virtually the same ever since.

​   Scroll down and examine larger-scale maps that bring to live the evolution of West Windsor's boundaries between 1849 and today!  After that, peruse the "West Windsor's Historic Sites" web page to gain a full understanding of not only the township's boundaries, but also over 200 historic sites within them - including various buildings, bridges, roads, farms, and even several extant and disappeared villages!
West Windsor, 1849:
West Windsor, 1875:
West Windsor Today: