Throughout its existence, West Windsor has experienced dramatic transformations of how it was governed and by whom. New Jersey started off as a British colony: in 1664, Charles II, King of England, granted the region to James II, Duke of York. Subsequently, the Duke leased this tract to Lord John Berkeley of Stratton and Sir George Carteret, who created the colony of "Nova Caesarea-" later to be known as "New Jersey." This colony was led by Phiip Carteret as its first governor, who ruled from present-day Elizabeth.

​   In 1674, Berkeley sold his share of New Jersey to a group of Quakers (including William Penn), effectively splitting the province into two halves: East and West Jersey. The demarcation between these two provinces generally followed the "Keith Line" surveyed 13 years later by George Keith. East Jersey, which contained West Windsor (Quakerbridge Road was constructed along the Keith Line) was assigned to George Carteret and West Jersey to a group of Quakers, led by William Penn, who was to soon own the entire state.
​
In 1683, four counties were established in East Jersey - Bergen, Essex, Monmouth, and Middlesex, the last of which contained present-day West Windsor. East and West Jersey reunited as a royal colony under Queen Anne in 1702, when Quaker charters were surrendered to the British.

Much of present-day West Windsor was part of Piscataway Township (founded in 1693) until about 1724/5, when New Brunswick Township was formed south of the Raritan River, and 1730, when the city of New Brunswick was chartered. On March 9, 1751 (written as "1750" in what was then still the Julian calendar year), this portion of the county was officially organized into Windsor Township (an offshoot of "New Windsor." which was informally created in 1730/1), comprising present-day East and West Windsor, as well as the portion of Princeton south of Nassau Street and U.S. #206.
​​ 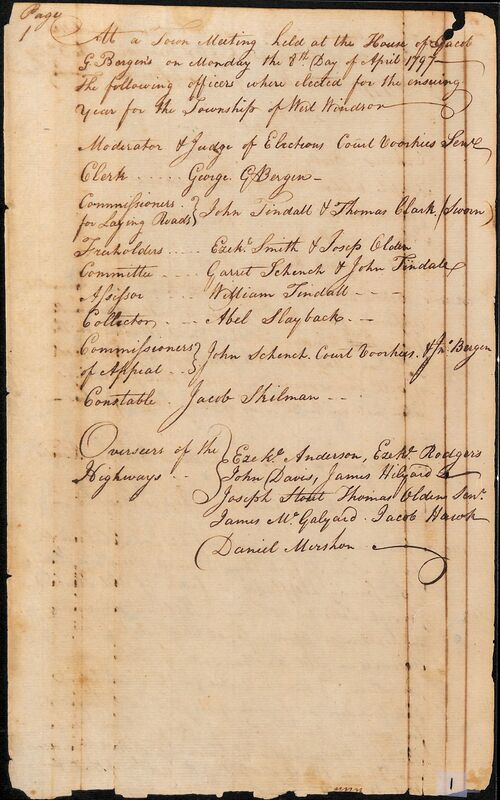 The original articles of formation mentioned some some interesting items, including references to:
And so, on April 8, 1797 (one year before New Jersey's Township Act of 1798, which recognized and incorporated 104 municipalities throughout the state), a group of farmers sat down with pens in hand at a mid-1700s tavern in Dutch Neck owned by Jacob G. Bergen. Their purpose? To appoint the very first leaders of our township.

The minutes from that convention are pictured adjacent. At the meeting, various job titles were given to some of the community’s most prominent members, most from families still living in the township today. These roles included:


Notice no mention of a mayor or any dedicated municipal department! Rather, with a population numbering in the hundreds (in contrast to the ~30,000 living in West Windsor in 2019), with little infrastructure and mostly self-sufficient farming families, a small council was sufficient to keep the community operational. Also notice two long-gone positions: Overseers of the Highways (necessary in an age when stagecoach routes were becoming increasingly popular - Brunswick Pike would be constructed ten years later), and Constable (which existed until 1968, when the West Windsor Police Department was formed).

Also long-disappeared is the position of "Overseer of the Poor," a position that first appears in the minutes for the June 3, 1797 meeting.  This role was necessary in a time when the community consisted of farmers living off the land, and those who could not raise sufficient funds for themselves and their families were helped out by the community.

From this first congregation until 1891, West Windsor had no dedicated meeting house for governance. Rather, representatives almost always met in Jacob Bergen's tavern (called "Widow Bergen's Tavern" after his death in 1806, referencing his wife, Elizabeth) until May 10, 1809. Shortly afterwards, meetings were held in whatever location could be found - often the houses of the Township Committee's members (usually a Bergen or Vorhees), or West Windsor's two oldest religious institutions - the Neck Meeting House (constructed in 1797 and rebuilt as the Dutch Neck Presbyterian Church in 1816), and the Princeton Baptist Church in Penns Neck (constructed in 1812). Later, starting in 1820, the Red Lion Inn in Penns Neck - then owned by Asher Temple - started to host meetings as well.
​ 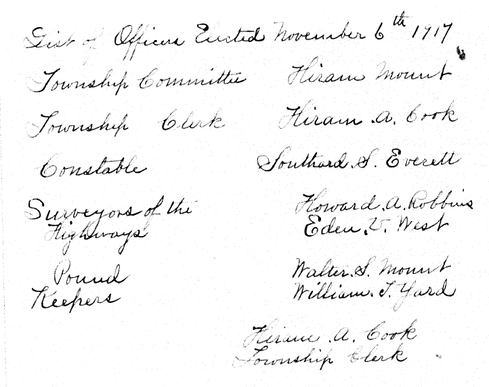 For the next century and a half, the government's role remained the same as it had been since 1797: overseeing infrastructural projects; collecting taxes; settling disputes between neighbors; reimbursing damages; appropriating money for the poor; hosting local, county, state, and national elections; and keeping the community safe. Moreover, the titles and roles of the government remained the same throughout the 1800s as it had been in that very first meeting on April 8, 1797. In fact, pictured adjacent is an excerpt from the November 6, 1917 meeting. Notice how little the positions changed even after 120 years - the only addition was the inclusion of the Pound Keepers!

However, this shouldn't come as much of a surprise; until the mid-1900s, West Windsor remained almost entirely a farming community. Thus the same needs and concerns prevailed whether it was 1797 or 1947. In fact, the biggest governance-related changes of the 1800s came not from internal township affairs, but rather border shifts. In 1838, Mercer County was formed, whereupon West Windsor called a new county home. In 1838, 1843 and 1853, three border shifts saw West Windsor cede land to Princeton, whereupon it no longer governed the population living within the affected regions.
​ 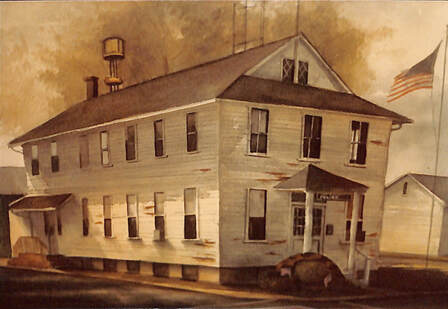 Until the last decade of the 1800s, township meetings continued to be hosted wherever was opportune - the last venue being William West's house in Clarksville from 1878 until December 6, 1890. During this final convention, an instrumental note was recorded: "A Motion carried that the Township rent the Building in which the Election was held last June at Dutch Neck...for the use of the Township for all public meetings at the rent of $30.00... to commence February 15th, 1891."

Thus, West Windsor now had a dedicated Town Hall. This building, and the old blacksmith's shop behind it (constructed c. 1750 and now long-gone), sat 501 Village Road West - where the World War II memorial (constructed in 1947 directly in front of the structure) exists today. The edifice housed numerous municipal departments until the 1970s, in addition to the Dutch Neck Fire Company (now the West Windsor Fire Co. No. 1), the West Windsor Police Department (and its short-lived predecessor, the part-time police department), and the "Twin W" First Aid Squad (1971-2015).
​ 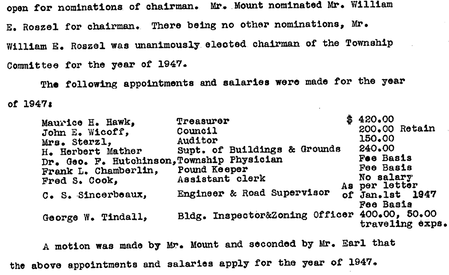 The aforementioned Township Act of 1798 was revised 101 years later, when the Township Act of 1899 abolished the inefficient "town meeting" format that had favored rural townships and gave the Township Committee - now expanded to five people from three and headed by an annually-elected chairman - more power. The Township Committee's members were elected for staggered three-year terms, instead of annually. This basic structure continued for five decades afterwards, with the addition of several roles appearing by World War II. Pictured adjacent are the people elected for township positions on January 1, 1947. 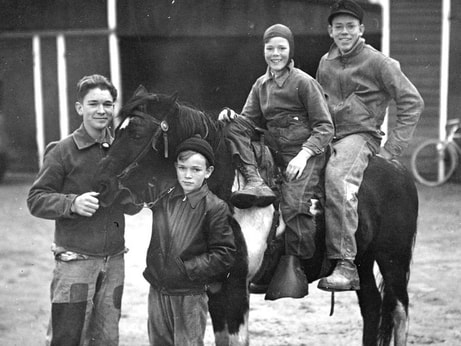 On September 19, 1944, the township adopted its first zoning ordinance - a sign of increasing structure in the midcentury municipality. 8 years later, one of the most significant developments for West Windsor's mid-century government occurred on August 29, 1952. On this day, the minutes of the Township Committee, presided by chairman Fred R. Earl, recorded the following text: "BE IT RESOLVED by the Township Committee of the Township of West Windsor, in the County of Mercer that the Chairman be and is hereby designated Mayor as provided by law."

Apparently, this resolution did not take effect immediately. In fact, it wasn't until September 26th -  three meetings later - that Fred R. Earl is mentioned as Mayor. The January 1, 1953 meeting shows the first nomination for mayor of West Windsor, wherein the Township Committee unanimously voted for Russel Mount to replace Earl. This practice of the Township Committee nominating a new mayor each year would continue for the next 4 decades. Some figures, such as Malcolm Roszel, would serve for many years; others only for one.

Also in 1952 was the establishment of the township's Planning Board - a reaction to the very beginning of suburban development in the township. Nine years later in 1961, West Windsor Township adopted its "first phase" Master Plan, and on October 28, 1964, its first comprehensive Master Plan was enacted. Since then, the Maste Plan has been continually updated as the needs and expectations of the township has changed. 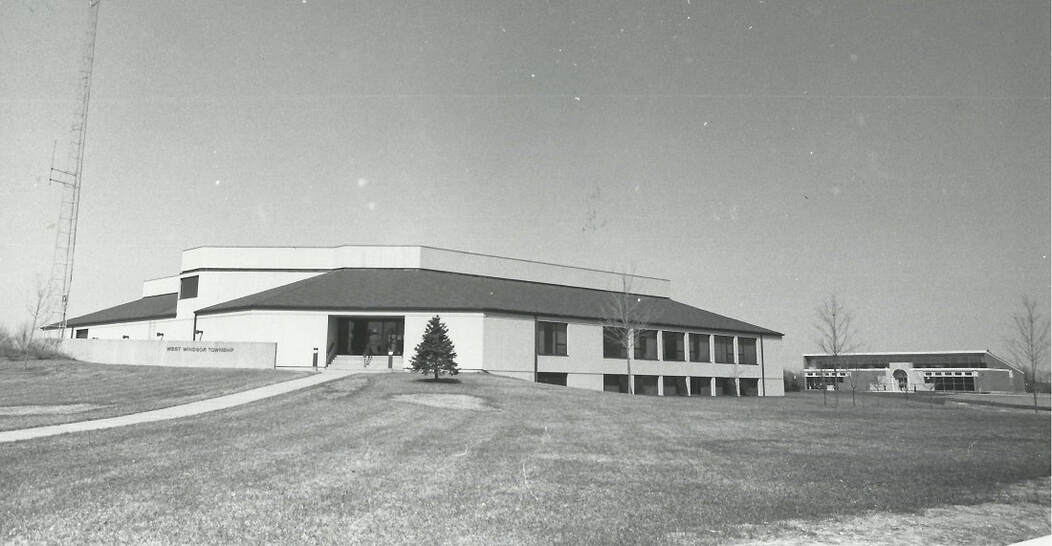 The Municipal Building in 1986
The late 20th Century

The 1970s were a seminal time period for governance in West Windsor. In 1975, the municipality, then led by Mayor Richard Walter, hired its first Township Administrator, Girard C. Miller - a much-needed employee in a township that was just on the cusp of its transition to a rapidly-growing suburbia.

In the same year, the government, in need of larger quarters due to the myriad new departments that had developed over the decades (and the dramatic associated increase in staff), began to move out of the old Town Hall. After two years, the relocation to the current municipal complex at the intersection of North Post and Clarksville Roads was mostly complete (other buildings, such as the Senior Center, Post Office, Library, and Police headquarters would be built in the ensuing decades), whereupon the old Town Hall was torn down.

From 1979 to 1981, West Windsor Township appointed a Charter Study Committee, which "recommended changing to a partisan council-manager form of government." While the idea was seriously considered, it was ultimately defeated, along with an additional "petition-initiated referendum to change to a partisan mayor-and-council form of government" in 1991.
​ 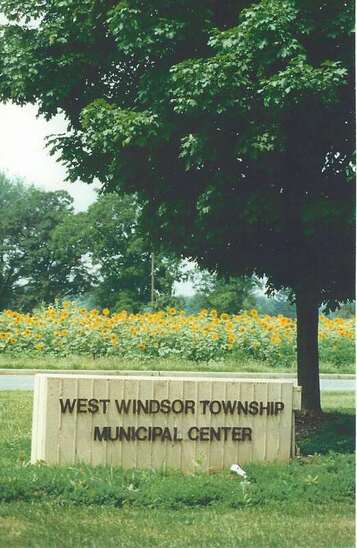 However, in 1992, wide approval by Township voters via referendum was given to a non-partisan Mayor-council form of government. Thus, on July 1, 1993, our current form of local government - wherein a mayor holding all executive authority and a five-member council holding all legislative authority - was inaugurated. Both the mayor and the council are salaried and elected by the township's residents every four years.

This form of government continues to this day. In September 2019, mayor Hermant Marathe (who took on the role in 2017) presides, and the members of the council are Alison Miller (Council President), Yingchao "YZ" Zhang (Council Vice President), Virginia Manzari, Linda Geevers, and Ayesha Hamilton. The government overall has 8 main departments - Administration, Clerk, Community Development, Law, Human Services, Public Safety, Public Works, and the Municipal Court - with 31 divisions/offices and dozens of employees overseeing a town of almost 30,000.

Doubtless, West Windsor's governance has changed dramatically since the very first meeting in a little Dutch Neck tavern on April 8, 1797.