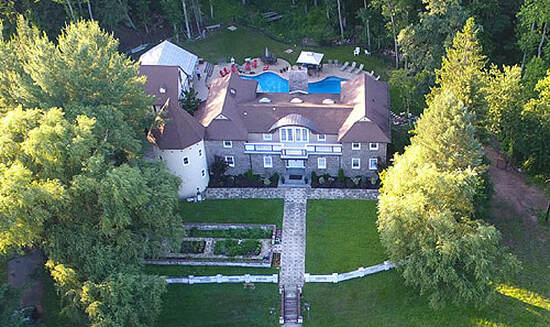 A building seemingly lost in time and out of place, The Castle at 96 Bear Brook Road is one of West Windsor's more curious buildings. Located on an extensive 13 acre property fronted by a large wrought iron fence, the house sits at the end of a long driveway which begins just past a white, ornamental cinder block entrance portal. The tract - renamed "Tamarack Farms" -  was purchased in 1972 by Joan and Scott Parry - the former a founding member and erstwhile President of the Historical Society of West Windsor, and the latter a communications professor. By 1976 construction - much of it done by the family - began on what would become their dream house by 1979.

Modeled after the European manor homes the couple saw on their numerous trips abroad, the building features a long front lawn, a symmetrical three-story I-shaped house, and even a "turret" jutting out of the front left. When it was finished, the residence sat across from an extensive tract of farmland that has since been taken over by numerous townhouses and condominiums.

When the Historical Society of West Windsor was founded in 1983, the house provided a headquarters for the nascent organization. Soon, annual Holiday House Tours benefiting the Society and its historical restoration projects were held, wherein much of the community would come to explore the expansive, 26-room building and meet and greet their neighbors. Antiques and collectibles (including a set of bells mounted on a carillon that were once owned by P. T. Barnum) of all kinds filled the house for curious explorers to find, and the building's three floors were decorated with a Victorian theme, - appropriate for the President of the Historical Society! Even Santa Clause came to visit the house each year, and excited children could, in turn, see him busy in his "workshop!"

In May of 2012, the Parrys, looking to move (especially after the damage Hurricane Irene caused to the property) hosted an estate auction. Two years later, the house was sold to Brad Poller, president of Princeton Internet Marketing Direct. Although it has been years since the last holiday house tour, the building's memories still live on through the Parry Family - including an interesting write-up by Kiki Parry about her memories growing up in the building. To this day, its white cinder block and wrought iron fence still stand as a testament to this curious property's existence off of Bear Brook Road.