The 16mm film at the bottom of this page depicts the Shangle farm, which once called West Windsor home for hundreds of years. It was given to Sylvanus Grover when he purchaed the 250 acre farm in 1937. The footage was donated to the Historical Society of West Windsor by Mrs. Ada Shangle, and was captured in the mid-1920s, showing the farm when it was operated by Fred and Ada Shangle.

The property was located about 400 yards west of the intersection of Conover and South Post Roads. It had been in the Shangle family for generations, having appeared on both an 1849 and an 1875 map of West Windsor. In 1849, it was owned by an "F. H. Shangle," and in 1875 by Fred K. Shangle. Fred and Ada Shangle lived in half of the double house shown in the video. In the other half resided Mr. and Mrs. Arthur Malsbury. Also nearby was the Cranston farm, located close to South Post Road and operated by George and Helen Cranston.
​ 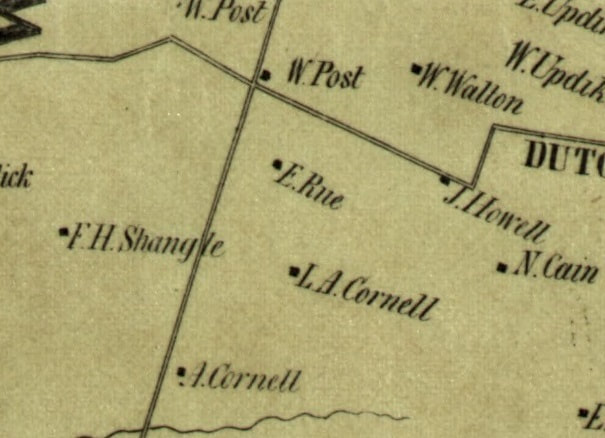 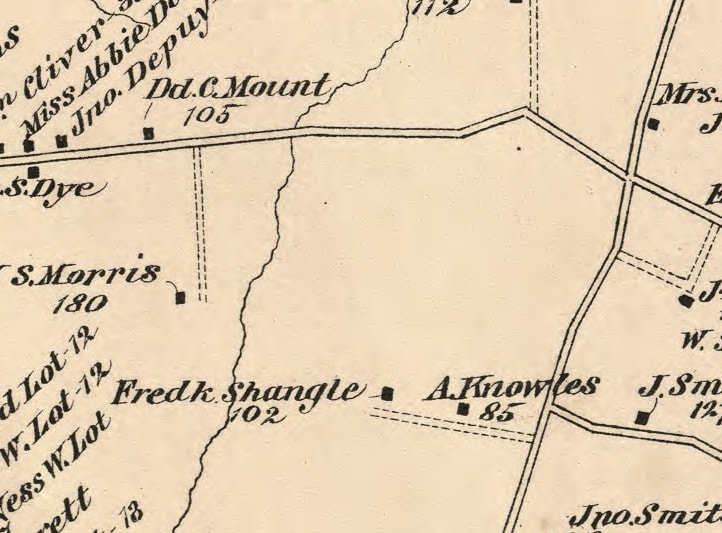 Shangle Farm, 1849
Mr. Malsbury and Mr. Cranston farmed the ground on shares. In the film, Mr. Cranston is shown on the two-row potato planter. Mr. Malsbury is shown in the cow pasture with his dairy herd. Mr. and Mrs. Cranston and their sons, George and Richard, are shown in their farmyard. Mr. Shangle, in a dark suit, is shown with his family. Also shown here are Jim Van Horn and a Mr. Nixon, both hired help. The large car is a 1928 Essex.

The farm continued to operate for decades. It was demolished in 1991 to make way for the Mercer Oaks golf course.

This footage also acts a window into what most of West Windsor looked like before the middle of the 20th century, when the township was home to only about 1,500 residents. Agriculture dominated the township, with sweeping bucolic vistas. Even as recently as the 1970s, most of the township (population: ~7,500) was agrarian, as the biggest wave of growth in the township's population would only start in the 1980s. Today, only a fraction of that farmland remains in West Windsor (population in 2019: ~30,000). Luckily, much of it is preserved open space that will be enjoyed by generations to come.

Enjoy the attached video - a look into a quieter, more rural West Windsor...