Many who grew up in West Windsor have heard that Dutch Neck School was built on top of an old graveyard. What they might not know is that one of those buried there was also one of West Windsor’s early Black landowners - Pompey Updike.
Origins

Much of Pompey Updike’s origins have been lost to time. Born in New Jersey between 1799 and 1803 (records conflict), he carries a last name which, of Dutch origin, may suggest that either he or his predecessors were former slaves who adopted the name (potentially from a former slaveowner). In fact, he may be related to Diana Updike, a slave of John S. Fisher, erstwhile owner of the Schenck Farmstead. In 1827 he was baptized in the Hightstown Baptist Church. 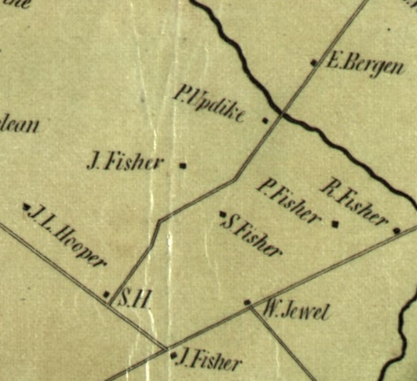 Pompey’s story in West Windsor begins between 1830 and 1840 when he moved to West Windsor. The 1840 federal census shows him heading a household with a Black male under 10 years of age and two Black females – one under 10 and one 24-36 years old. Notably, at the time, slavery (abolished in NJ in 1846) was still practiced in West Windsor (21 slaves in the 1830 census and 3 in the 1840) – and although Pompey himself was free, he may have worked alongside slaves as a farmhand. In fact, current research shows that Jonathan S. Fisher – owner of the Schenck Farmstead and surrounding properties (including the Cranbury Golf Course) – kept slaves as recently as the 1830s and employed Updike as a paid laborer.

An 1849 map depicts Updike residing next to Fisher just south of the intersection of Bear Brook and Southfield Road. One year later, the 1850 census noted that Pompey, then 46, was a laborer who owned $400 of real estate. He lived with Kate Updike (48 years old and possibly a wife), Furman Updike (10 years old, perhaps a son), and a Sarah Broun – 65 years old (relation unknown). 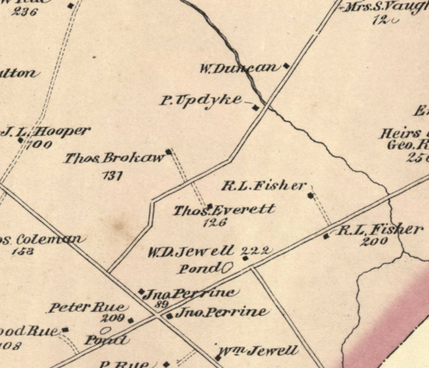 However, on May 5, 1852, the NJ marriage index recorded Pompey’s marriage to Lucy Ann Jackson in Cranbury. On November 23, Updike sold a 1-acre property in East Windsor to James D. Hall of Upper Freehold for $150, fully cementing his entire property ownership in West Windsor. The 1860 census – and a map of the same year – collectively indicate that he still resided at the same property south of Bear Brook as a farm laborer with $500 in real estate and $150 in other assets. Both Lucy A. (age 49) and Freeman E. (Age 18 – possibly the “Furman” from the previous census) – resided with him as well.

The 1860s become an ambiguous time for Pompey. An 1863/64 estate collection accounts book indicates that Pompey owed $33.53 to a local but contains the notation “Gone to War.” It is unknown if this is a mistake or if Pompey – in his early 60s – was indeed employed by the Union Army in the Civil War. If so, this makes him one of a few dozen WW residents who did so, and the only known Black one. Further research is needed to corroborate this possibility. 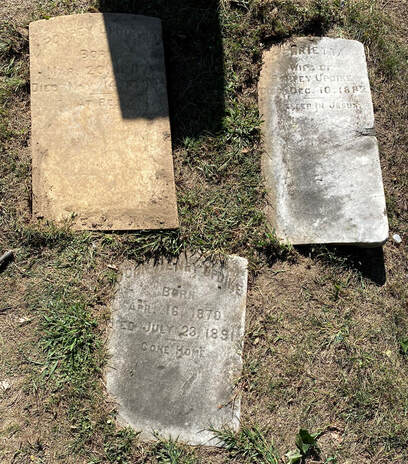 The graves of Pompey, Henrietta, and John Updike
A Newer Family

By 1870, Lucy and Freeman disappear as members of Pompey’s family and on January 26 of that year, in Princeton, Pompey marries what is possibly his third wife: Henrietta Higgins. On April 16, John Henry was born to Pompey (then in his mid-late 60s) and Henrietta (then 24). That year’s census shows all three residing in Princeton in the house of Sarah Schenck alongside her children – James S. William S., and Alexander Schenck. Pompey served the family as a farm hand.
Yet by 1880, Pompey, John, and Henrietta had moved back to West Windsor. Although Henrietta was 4 decades younger, she passed away on December 10, 1882. Three years later, the NJ state census shows Pompey living by himself on his long-held property, John having gone to work for Jacob H. Stults.
On May 14, 1890, Pompey Updike passed away. A May 22 obituary in the Hightstown Gazette records the following: “…the community loses another of its landmarks… His tall form and polite demeanor always attracted attention, and he had many friends who will be sorry to hear of his death.” 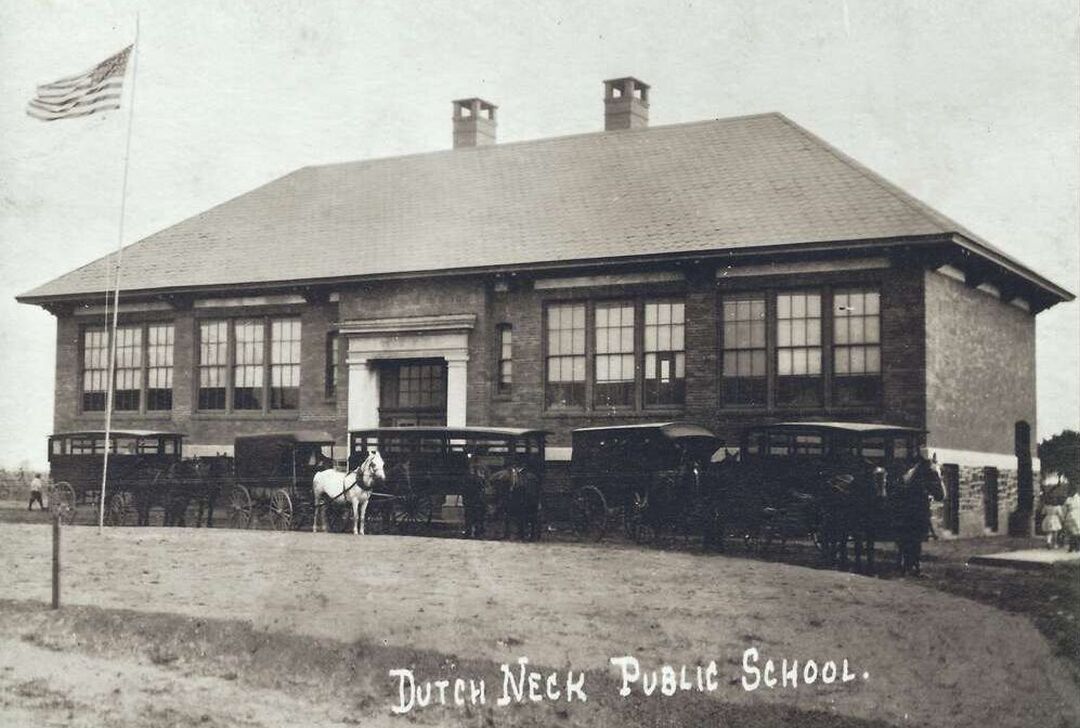 Yet Pompey’s story does not end here. In 1833, Henry Dye – then West Windsor’s “Overseer of the Poor” – was charged with building a graveyard for the town’s “paupers.” This cemetery, located where Dutch Neck School’s southeast parking lot exists today, eventually became a segregated graveyard for West Windsor’s Black residents as well. Upon the construction of the school in 1917, the bodies of Pompey, Henrietta, and John H. Updike were dug up and relocated to the Cedar Hill Cemetery in Hightstown. There the three rest, their poorly-maintained graves marked by three fallen gravestones.
​
By the mid-1970s, Pompey Updike’s former farm and house had been torn down and Fairway Drive along Southfield Road was built in its place. While the houses of his former employer, John Fisher, still stand (at the Cranbury Golf Course and the Schenck Farmstead), the only remnants of Pompey are those three weathered gravestones in Hightstown. Yet his memories linger on in the annals of West Windsor history.
​
Thank you to Bridget and Maggie Walsh for their extensive research on this story. 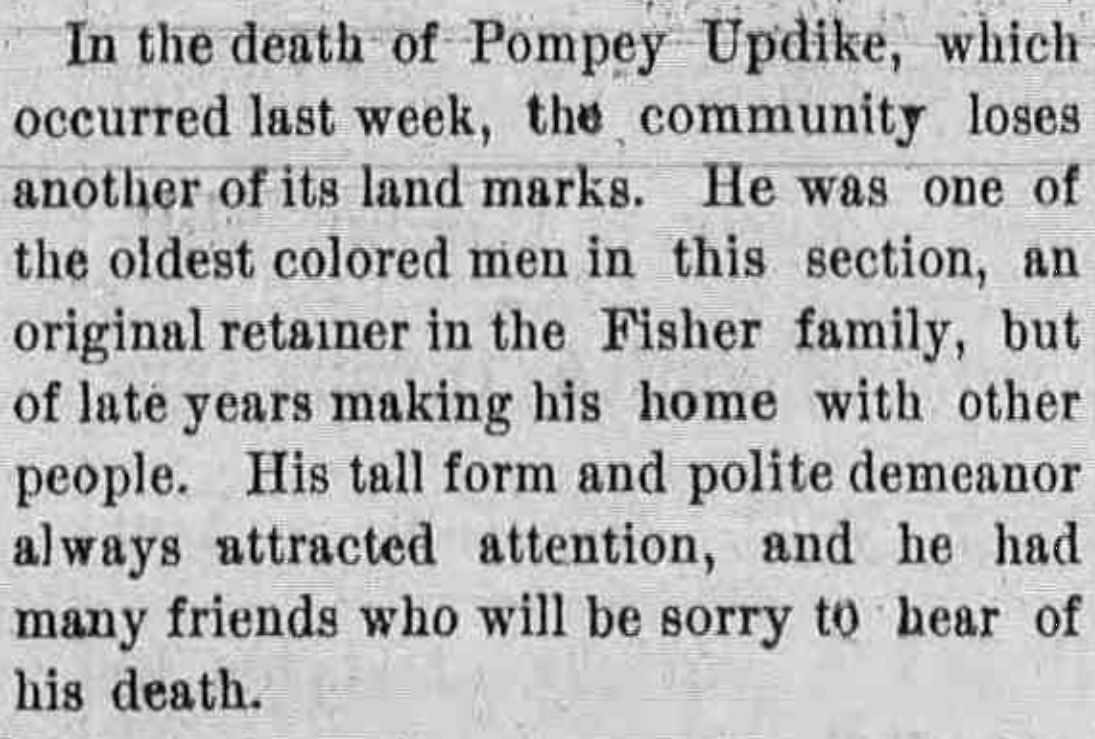