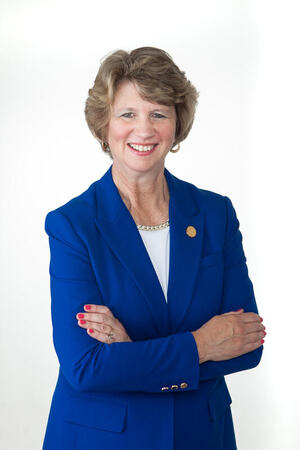 Although most of our WW Town Council members are relatively new, one – Linda Geevers – has served for nearly sixteen years, following . This week, Voices of West Windsor sits down with her to discuss West Windsor’s development over the past decade and a half, the importance of women in government, COVID initiatives, and more.
Talking Points:

(On what is unique about West Windsor)

“West Windsor is unique in that is not just a diverse community but also a very inclusive community. Diversity of course comes in many forms – race, ethnicity, religion, income, political affiliation, etc. The challenge is to take that diversity and mold it into inclusivity… we want everyone to feel welcome. Each year the township holds events that bring people together – the MLK celebrations at the West Windsor Arts Center, there is the Community Day, National Night Out, (West Windsor) Farmer’s Market, War of the Worlds events, and capping the year, a tree lighting ceremony. All of our leaders have a tremendous amount of energy.”

(On who in West Windsor inspires her)

“There is not one individual, but it’s more of a group of people I’ve worked with over the years (starting with the school board, from 1999-2005 and then with the Town Council). I’m grateful for the many relationships that formed because of all the important issues we had to decide on over the years. I’ve served under 2 mayors and have gotten to know many council members; I’m grateful to have gotten to know them.”

(On her largest accomplishments and what could have been done differently)

“The settlement with Atlantic Realty (on the Howard Hughes property) to prevent housing on the site (is one of my recent accomplishments). We were in litigation and finally settled so there will be no housing on the (650-acre) site. Now there will be commercial there – possibly warehouses, but it will be a ratable positive, rather than a negative… There’s no capacity in our school district (to accommodate an influx of school children residential development there would bring in).

As a planning board member, I am proud of the improvements at Windsor Plaza. A new buyer came in and it took three long meetings to get that application approved and I think it looks so much nicer than it did before. I guess I’ve been instrumental in approving many site plans around town to fulfill our (fair share housing obligations) as well as working on a new master plan.

I’m very glad to have been a part of all the expansions of our parks around town – including a skate park, pickle ball court, cricket field at community park, as well as the expansion of Duck Pond Park with tennis, basketball, volleyball, and soccer fields… I’m proud of all that. Yes, people come here for the schools and train station but there are also a lot of amenities to be proud of here.

The only thing I would have preferred to have occurred would be a new town center in District 1 of the Redevelopment Plan (next to the train station on the west side of the tracks). We’re going to end up with a lot of the housing but a lot less retail than originally planned. But our affordable housing obligations will be met. There were hopes over the years that we would have been able to turn it into a more vibrant town center, but it will look different now.”

(On the importance of women in local government)

“I think that the visibility of elected women is important to inspire other women to run… especially with younger women. Locally, I’ve won 2 school board elections and 4 consecutive council elections. I and other women spend an incredible amount of time getting elected and serving our communities through our leadership. Personal sacrifices, no doubt, are made… but if you want to do it, you will find a way to do it… By stepping up and learning how to run a good campaign, many more women will win elections. They should contact people like me, who have been elected and on numerous campaigns… if anyone wants to talk, just contact me and we can (discuss)… It’s hard work, but it’s worth it… There’s a lot of work, a lot of materials to read, a lot of questioning and analysis – all of that (is needed) to make decisions. We are a town that is constantly growing, and (you need to consider how to) handle that – with new school children coming in, with roads, with safety issues, EMS issues, disputes, traffic, and all sorts of things. The growth brings in a lot, and you have to try to plan and budget for these things so our staff and departments are not overwhelmed.”

(On planning for the COVID-19 crisis and personal initiatives)

“Day to day actions for COVID were primarily measured by Mayor Hemant Marathe, Business Administrator Marlena Schmid, Health Officer Jill Swanson, Police Chief Robert Garofalo, and EMS Chief Timothy Lynch, in coordination with the two volunteer fire companies. Councilman Michael Stevens who is with the Fire Police is very helpful with his knowledge and experience and his science background.
In the early days of the pandemic, two members (of the Council) would sit in Room A (of the municipal building) with the Mayor and the other managers and Chiefs to review the latest information and hear from one another. We were in a crisis at that point (in the spring of 2020) that no one had ever dealt with before. Council members would report back to one another on these meetings (which included both the executive and legislative branch of the town government) for several months and we would rotate. The Mayor and Health Department used the township website and various social media sites to post public updates. Jill Swanson and the Health Department staff were working long hours and weekends to do all that had to be done – people don’t necessarily realize how intense an operation it is when you’re dealing with this pandemic.

I’m thankful to the staff and all the volunteers for their service for their efforts to keep us safe and healthy this past year. There is also our “Hometown Heroes” section on the municipal website where the Mayor and Council honor various organizations and volunteer groups; we honor them with a proclamation and take pictures with them. The personal touch of seeing them (is important and) we wanted to make sure they knew they were special too and that we were thankful and grateful for the many hours they are putting in (helping their community).

At the beginning of the crisis, getting masks and gowns for healthcare professionals and first responders was very challenging. The Mercer Mask Project made more than 21,600 masks and more than 1,500 gowns. I’m thankful to them for their extraordinary efforts and for giving me dozens of gowns to deliver to Artis Senior Living. So there are a lot of different parts coming together.”

“Fortunately, West Windsor has over 50% of its land preserved, in large part due to Friends of West Windsor Open Space. In the next five years we’re going to several large housing developments constructed. In 2025 there will be a fourth round for affordable housing. And I initiated a recent resolution with our Affordable Housing Committee that was passed by the Council urging the governor (Phil Murphy) to reinstate the Council on Affordable Housing (COAH) back up and running. The litigation costs have been very expensive over the years… trying to determine affordable housing obligations. With COAH, the guidelines are determined so towns know what is expected of them and don’t have to be debating in front of judges. So I would like to see West Windsor remain a sustainable community that values sustainability, inclusivity, and excellence. At the end of the day, all that matters is each other.”