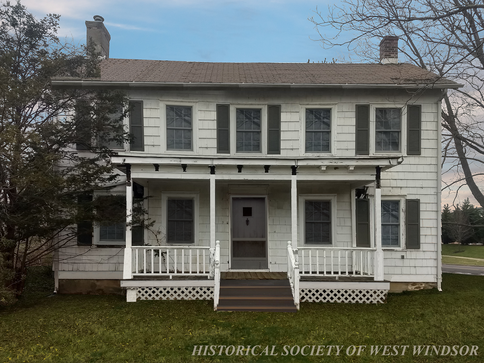 Until April of 2020, an old, decaying house stood just a few hundred feet south of the intersection of Southfield Road and Princeton-Hightstown Roads. Overlooking McGetrick Lane - a small, quiet side street – this building, although empty for decades and falling into dilapidation, nevertheless retained the memories of one of its original inhabitants - a Civil War soldier.

Patrick McGetrick was born in Ireland in 1826. Some time before the 1850s he immigrated to the United States, avoiding the Great Famine that killed roughly a million people in his home country and displaced millions more in the 1840s. He married his wife Mary (1833-1901) at an unknown date and the two eventually settled in potato-rich West Windsor, New Jersey. Throughout the 1850s and 1860s, the couple raised at least nine children. Possibly as a result, the McGetrick homestead was constructed c. 1860 (according to township tax records) along Princeton-Hightstown Road amid a cluster of old farmhouses.
​ 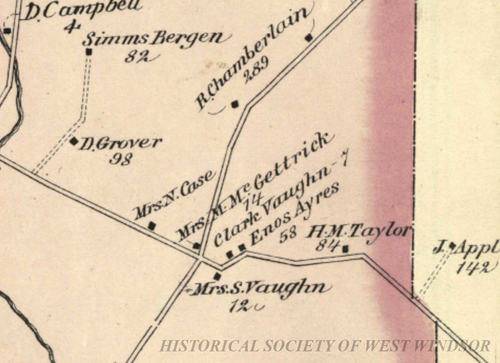 The house in 1875
This 5-bay center hall plan I house featured a 3-bay Victorian porch, two interior end chimneys, shingle cladding, and horsehair plaster walls. Seven rooms in total with 2 bedrooms, it was a simple abode on a small property (14 acres in 1875) with only a few outbuildings. Nevertheless, it was enough to provide for the family – at least for a time. On April 12 1861, the Confederate States Army bombarded Fort Sumter in South Carolina, signaling the start of the Civil War. Two years later, Patrick McGetrick, age 36/37, left his family to join the Union Army. Mustering in on February 23 as a private, he served for over two years, witnessing nearly twenty battles and skirmishes in Virginia, West Virginia, Washington D.C., and Pennsylvania.

A few months after the start of the Civil War, this regiment was created by William Bryant of Beverly, NJ to recruit from residents of New Jersey, but was not under the control or supervision of the State authorities. It was originally known as "Olden Legion" after New Jersey Governor Charles Olden, but changed names and command several times over the years. The group organized on October 9, 1861 in Beverly's home town and left for Washington DC on December 26: On February 23, 1863, Patrick McGetrick joined this contingent as a Private (and left with the same rank). Over the years the group was involved in at least the following battles and skirmishes (perhaps more; sources differ): 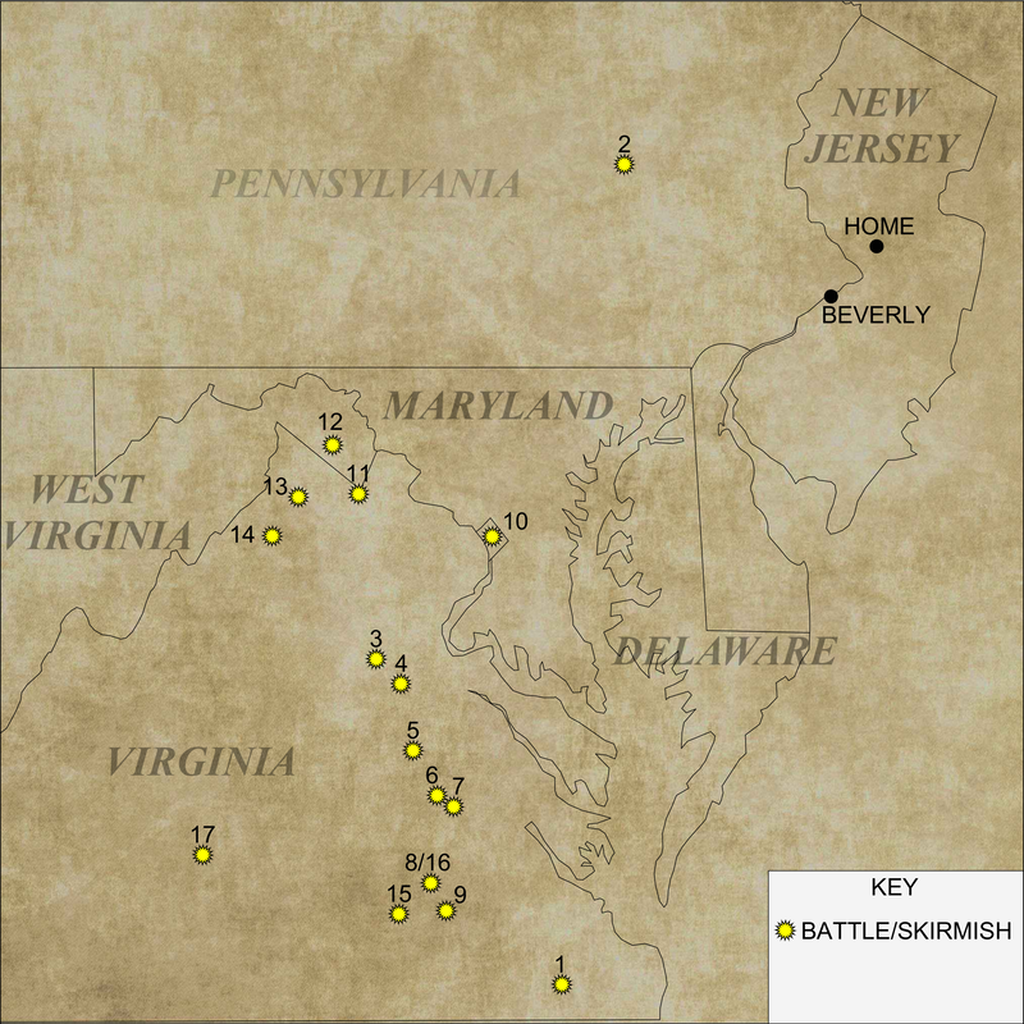 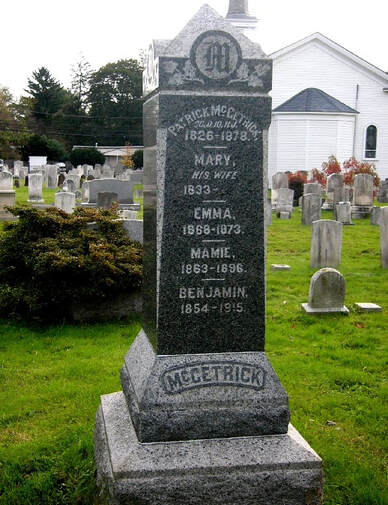 ​By the time Patrick returned to his family after mustering out in late June/early July of 1865, he had witnessed at least 17 battles over just 2 years and 4 months. He was also still a private even though he was 38 or 39 years old. The family continued to farm the land, reaping the benefits of a modest pension. By the time Patrick died in 1878, Mary and Patrick had raised four girls and six boys , although their youngest daughter, Emma (born 1868) sadly died at the age of 5 in 1873. Mary died 28 years later, in 1901. They and three of their children – Emma, Mary (1863-1896), and Benjamin (1854-1915) – are buried in the Dutch Neck Presbyterian Church’s cemetery, marked by a tall, black obelisk. A few more McGetrick siblings rest nearby.​​

Over the decades after the McGetricks moved out (some time after 1875), the farmhouse passed from family to family, remaining a modest house on a modest plot surrounded by larger farmsteads. Both a 1905 and a 1918 map shows ownership of the property by a "J. E. Nutt," followed at an unknown point by an "Ellis Warren." Princeton-Hightstown Road was straightened some time between 1918 and 1930, turning McGetrick Lane into a quiet side avenue.  Henry Searles purchased the farm some time prior to 1964. Finally, around 1974, the house's last owners - the Goldmans - acquired the property.

During their residency, the property contained the house, a grape vine, barn, an old shed, and a long metal Morton barn (the last structure still exists in late 2020). It remained a quiet area, but the echoes of the house’s first family may have provided some company: before the Goldmans sold the property in 1992 – a few years after moving and renting the house out - they found an old cannonball in the backyard – perhaps a relic from Patrick’s service. Thank you to the Goldmans for providing helpful information and leads on the building's history.​

In mid April 2020 the McGetrick farmhouse was razed, well over a century and a half after its construction and 28 years after its last tenants moved out. At the time of this writing only an open pit, soon to be filled in, reveals the precise location of the building. However, both the adjacent road’s name, as well as documentation preserved over the years, has let the memories of the McGetricks live on.

Additional thanks to Joyce Miller, great-great granddaughter of Patrick, for her efforts to preserve this slice of West Windsor history. 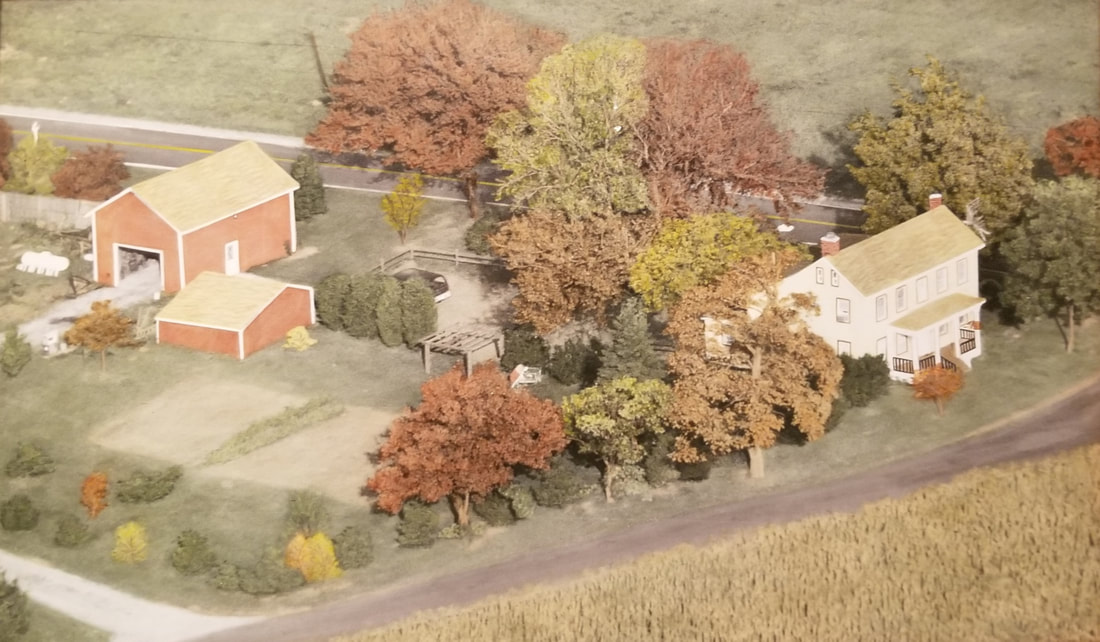