The 28th Volunteer Regiment was drawn up near Freehold, New Jersey in the summer of 1862. It drew largely from the townships of Freehold, South Brunswick, and North Brunswick for its enlisted men, though outsiders like William Grover, who lived in West Windsor, were also welcomed. The regiment saw several leaders who met a variety of fates - from being killed in battle at Fredericksburg to being cashiered (fired from the army) for drunkenness and “resigning in the face of the enemy,” to being captured in battle. Surely, being an officer in the 28th was an unpopular position during its 13-month deployment!
​ 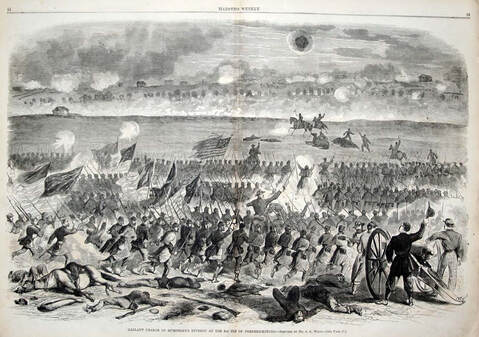 Battle of Fredericksburg
A Letter from the Front

After mustering in September of 1862, the 28th deployed to Washington DC, where it was stationed just south of the city limits. From October until December its members manned the Defenses of Washington, a series of 68 interconnected fortifications ringing the National Capital. During this time several men in the company became seriously ill due to the numerous diseases that spread among the units manning the defenses. In December, it was absorbed into the Army of the Potomac and followed it to Falmouth Virginia. There, the Army of the Potomac would be plunged into a series of skirmishes and maneuvers, culminating in the 28th being flung headlong into the Battle of Fredericksburg, getting their first taste of the bloody action at one of the Union’s greatest defeats.

The Battle of Fredericksburg was fought on December 13th, 1862 and saw the 28th Volunteer Regiment thrown face-first into the churning maw of the American Civil War. Led by General Ambrose Burnside, the Army of the Potomac engaged Robert E. Lee’s Army of Northern Virginia in Spotsylvania County at the town of Fredericksburg. Union soldiers were forced to cross the Rappahannock River on exposed pontoon bridges, taking withering fire from the Confederate forces entrenched on the high ridges behind the town. From there, they made a series of bloody but futile frontal assaults against the Confederate line at two points, Prospect Hill and Marye’s Heights, that saw the Union Army take severe casualties. Though Union forces under General George Meade briefly penetrated the Confederate line, they were ultimately forced to retreat when Burnside called off the offensive in the face of appalling loss of life. The 28th volunteers were then relocated along with the rest of the Army back to Falmouth, Virginia, where they remained for the entirety of the winter until April 27th, 1863, when they were deployed as part of the Chancellorsville Campaign. They saw action once again during yet another of the Union’s defeats, the Battle of Chancellorsville.
​ 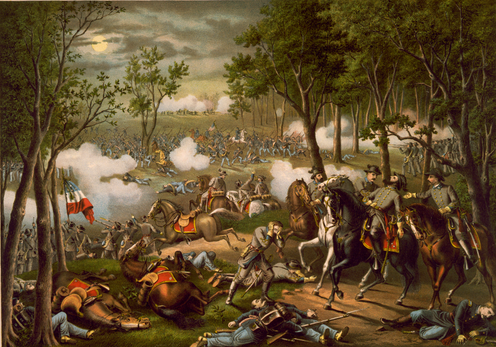 Battle of Chancellorsville
The Battle of Chancellorsville was fought from May 1st to 5th of 1863 and saw the 28th charging into yet another blunder-filled battle. They were attached to Major General John Sedgwick and given orders to once again attack the town of Fredericksburg, which was held by a small force of rebels under General Jubal Early, while the rest of the Army of the Potomac advanced under Major General Hooker to attack Lee’s army in force. Sedgwick’s maneuvering was meant to distract the Confederate high command and deceive them of Hooker’s actual plans. The 5th Brigade attacked the rebel positions (in an engagement also known as the Second Battle of Fredericksburg) and drove them back after several failed assaults, first from the town and then from the heights overlooking the town, claiming victory on the grounds that just a few months ago they had died red with their blood. The victory was short lived, however, as Sedgwick’s army was delayed in their push to rejoin Hooker’s main army and ultimately defeated at the brutal Battle of Salem Church on May 3rd, which foreshadowed the failure of the Chancellorsville campaign. The 28th regiment’s plight in this battle was ably captured by George D. Bergen, who recounted the events of the battle of Chancellorsville to his Uncle, Dutch Neck resident George C. Bergen. Their casualty figures are related to George C. in the post script of the letter, transcribed below:
​
Camp near Falmouth
Virginia, [Thursday] May 14, 1863

I now take this opportunity of writing [a] few lines. Stating that I am alive and in the land of Dixey. We have been in another plug mess. At Chancellorsville 12 miles from Fredericksburg. I suppose you kno[w] more about it than I do for very seldom we can get a paper. Although Hooker’s Army done some Slaughters where we was. Had it been that Sedwicks [sic] could [have] got 40 thousand men we could have had a view of the City of Richmond, as some of our Cavalry were inside of their fortifications, and that their forces were all Drawn from there.

Sunday morning [of the previous week, May 3] we was drawn out in line of Battle. We advanced 4 times, then we was ordered to shoot low and keep Cool as it was very hot that day. Our Colonel sent a man out to see if there was [an]other line of Battle ahead of us. He came back [and] told the Colonel that there was a line [of] Johneys [“Johnny Rebs”] about 75? Yards ahead of us in the woods we was [in], and told Him that they were Flanking us. [The] Colonel says no, say that they are advancing upon us. [The] 20th? Penn. Regy. Was on our right, they was firing. Our Colonel would not let us fire. We had them [within] just the right range for our guns – 1 Brick? & 3 Balls?. Wm. [“William”] Grover [A soldier from West Windsor] is all right. He sends his best Respects to you all.
Oh, I did not tell you about our Skedattling. [T]he first thing we Heard was the Rebs yelling like so many Hounds after us. [T]he Regts. Broke on our right and run into our lines. So we could not fire unless shooting our own Men. So there the Race was on. I lost my Haversack and all the goodies that was in it, especially Hardtack. I run myself nearly to death as they was Hollowing [sick] Halt Stop you Yankee or we’ll shoot you.

Uncle George, I wasn’t to ask you for some money. When I come back I only want the Interest and leave the amount of 1 hundred Standing as it is. If it is Convenient to do so. I will now bring my letter to a close. Give my Respects to Frank Evans, tell Rue & Sarah to be car[e]ful and not [to] write without Business(?).

Excuse me for writing so Soon better late than never
G. D. Bergen

P.S. There is 58 killed, wounded, and missing. Oh, our Colonel was either killed or taken Prisoner. We have not heard from him since.

These colorful and violent descriptions of the battlefield at Chancellorsville must have come to a shock to the people of the Bergen household, and to Dutch Neck as a whole! The village, like the rest of West Windsor township, was predominantly peaceful, far removed from the violence 300 miles to the south. One must imagine that the only bloodshed here came from the slaughtering of farm animals, the hunting of deer, perhaps the errant swing of a scythe or wood axe. George D.’s letter, though brief by nature of its urgency, brings the chaos and violence of the battlefield into stark detail.

Fortunately, both William Grover and George D. Bergen survived the war. So, too, did the “Colonel” who was taken captive was Lieutenant Colonel John A. Wildrick (not a West Windsor resident), who was taken prisoner during the battle of Chancellorsville. Soon afterwards, he was released following a prisoner exchange, whereupon he was returned to the field until the regiment was disbanded later in the year.