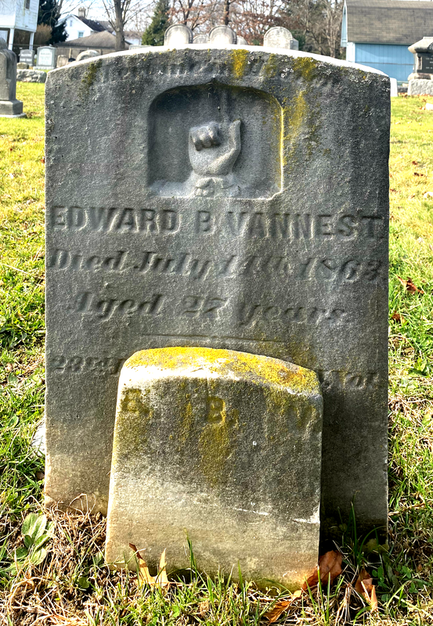 Would you want to be called a “Yahoo?” For Edward B. Vannest, one of West Windsor’s Civil War soldiers, it was likely a badge of honor.

Born c. 1836, Edward was a Private in Company B of NJ's 23rd Volunteer Infantry of the Union Army. The regiment mustered into service in 1862 and trained at Camp Cadwallader in Beverly, NJ, prior to deployment. After its first commander, Col. John S. Cox, resigned in the face of a court-martial for incompetence and drunkenness that November, Col. Henry O. Ryerson took over. Although Ryerson insultingly labeled them “Yahoos” due to their unprofessionalism, the soldiers adopted the nickname, sewing it onto their regimental flag and proudly referring to themselves as “Yahoos” for the rest of their lives.
​
The 23rd fought in the Battle of Fredericksburg, VA, in December 1862, and the Battle of Salem Church, VA in May 1863. After 9 months of serving, the regiment was mustered out on June 27, 1863. According to the National Parks Service, 90 men perished over its 9 months of service. Edward was not one of them.

​However, our tale does not have a happy ending. Edward seems to have lived in Bordentown in 1862 and signed a will referring to a wife, Hannah, and young child, William, likely anticipating that he might not return. While he did survive past the regiment’s mustering out, he passed away just a few weeks later, on July 14, 1863. While the cause of death is unknown, his young age – 27 – hints at disease, common in the Civil War. Research is ongoing to corroborate this theory.

Edward B. Vannest was buried in the Dutch Neck Presbyterian Church's cemetery, right here in West Windsor - possibly his boyhood home. His headstone is emblazoned with a single finger pointing towards the heavens, perhaps symbolizing the hope for an eternal, and peaceful, afterlife.​