War of the Worlds

Read the tale of the War of the Worlds - one of West Windsor's most famous historical incidents - below!

Turn back the clock to the 1930s and you’ll find a West Windsor worlds removed from today’s reality. Amid vast expanses of farmland, only about 2,000 people lived in this small community, little known outside of central New Jersey. However, on the night of October 30, 1938, a young auteur named Orson Welles and the rest of the “Mercury Theater on the Air” radio company changed this dynamic for good, with their "radio play" interpretation of science fiction author H. G. Wells' 1898 novel, "The War of the Worlds," about a Martian invasion of Earth. Forty years after H. G. Wells' book was published, Orson Welles and his crew ensured that the broadcast – and the sleepy neighborhood of Grovers Mill – would take center stage in the national consciousness. 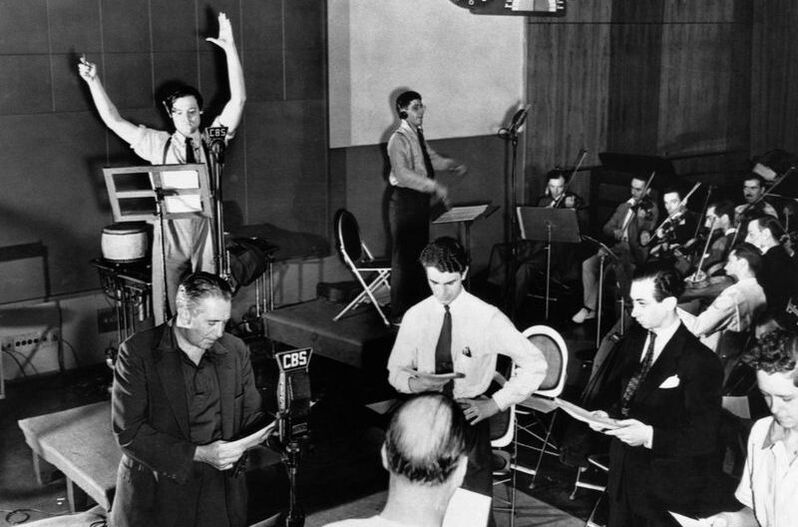 Orson Welles (top left, with arms in air) and the rest of the Mercury Theater On the Air crew.
That night, at 8 PM, radio listeners tuned in to a normal weather report and music by “Ramon Raquello and his orchestra,” only for the broadcast to be interrupted by several panicked “news bulletins” about unusual explosions on the surface of Mars. Although the musical program temporarily returned, it was soon cut short again – this time by reports of a strange meteorite crashing into the sleepy community of Grovers Mill, New Jersey. Further interruptions portrayed a story of monsters and unearthly tripods emerging from the crater, beginning a Martian invasion. Until 9 PM, the radio broadcast reported a nation under attack by an invading alien force, with the eventual battle between the military and the aliens, the invasion of New York City, and the death of thousands of East Coast residents. As in the novel, it is only pathogenic earth-based germs– alien to the Martians’ immune systems – that saved the world from extinction.

According to long-held but largely debunked popular belief, what happened during that hour and the ones that followed was nothing short of national hysteria. Legend said that millions of people supposedly fled their homes, took their own lives, and formed militias to fight back against the Martian aggressors. So realistic was the production that the nation was practically at war against a nonexistent threat. Following the broadcast, newspapers across the nation plastered the alleged “panic” on their front papers. Portraying Welles and his crew as mastermind frauds, they lambasted the production’s role in the “hysteria.” 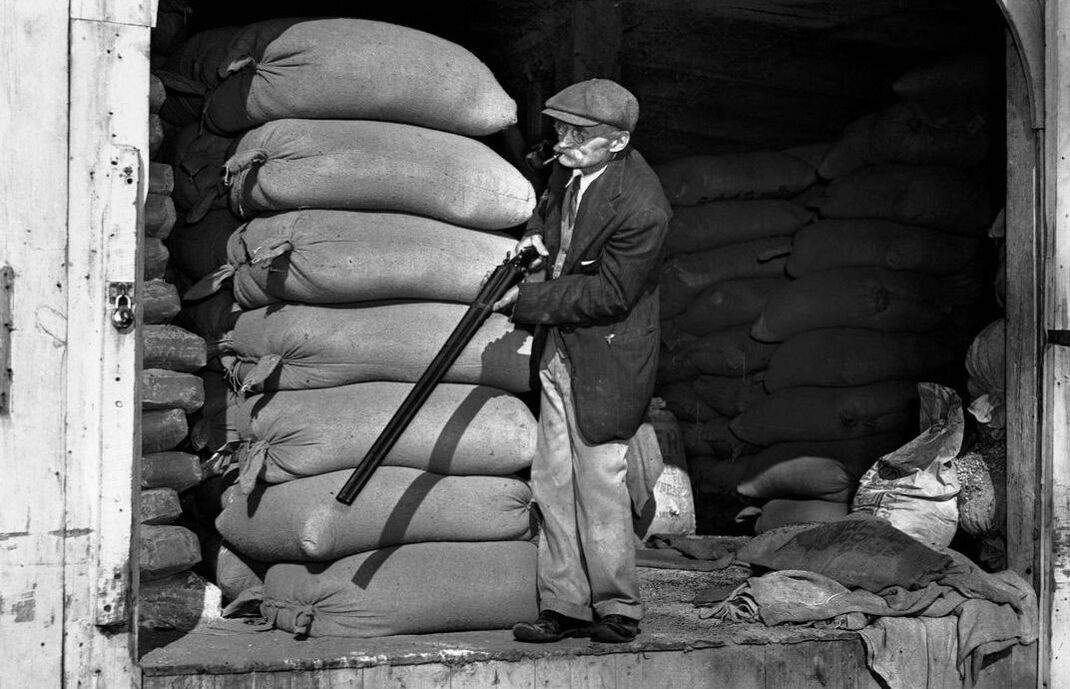 And, the tales say, nowhere was this fear more heightened than in the otherwise sleepy hamlet of Grovers Mill itself. Cars reputedly backed up the streets from here to Trenton, filled with families desperate to escape the extraterrestrial menace. Telephone lines were jammed with thousands of callers looking to connect with loved ones. One legend portrays a man so intent on escaping that he backed out of his garage through the closed door, shouting at his protesting wife, “We won’t be needing it anymore!” Another tells of a drunken local farmer mistaking a water tower behind a local house as an alien tripod and peppering it with bullet holes. Even more have residents forming militias and conducting a sweep of the Wilson Farm across the river (at the back of present-day High School North).
​
It is true that traffic did congest Central New Jersey, and switchboard operators in Trenton were especially overwhelmed that night due to the broadcast. And residents who grew up in Grovers Mill attest to seeing bullet holes in the water tower decades later (although former residents of the house whose backyard it stands in doubt it).
However, other newspapers at the time portrayed a sleepier scenario. A November 1st, 1938 article in the New York Daily News was titled “A Martian Raid Can’t Wake Up Grover’s Mill.” The author, George Dixon, spoke to two locals, James Andersen and Wyatt Fenity, both tenants on the Wilson farm. Andersen divulged that when his wife shook him awake and told him what was happening on the radio, “[he] just looked out the window and saw everything was about the same and went back to sleep.” Fenity, meanwhile, was not even listening to the broadcast, instead turning in early that night and commenting the next morning that the “Old Mill...was still standing.” 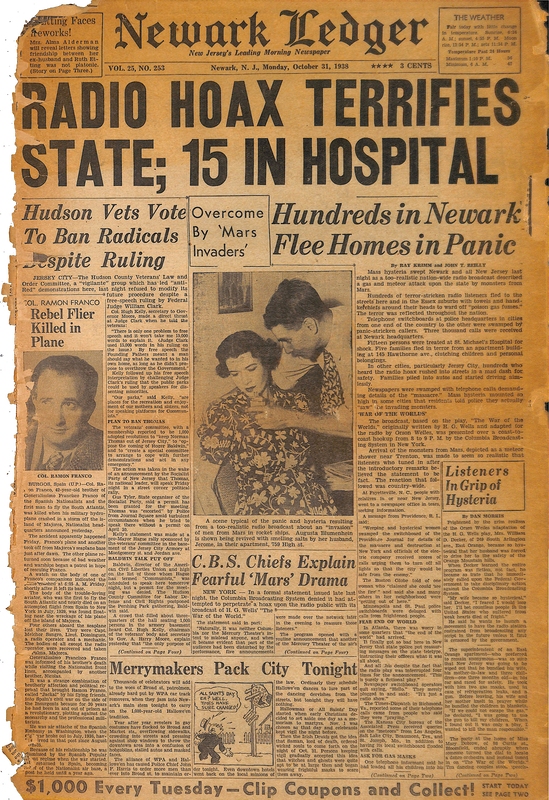 So where did tales of the national hysteria come from? A large amount of blame lies with newspapers. Incentivized to maximize viewership, many journalists published articles exaggerating the national response. In fact, of a group of 5,000 regular radio listeners interviewed by the C. E. Hooper ratings service soon after revealed that only 2 percent of them were listening to "a radio play," "the Orson Welles program," or something similar suggesting a CBS production. But that didn't stop newspapers castigating the broadcasters, with editorials such as The New York Times' "Terror of Radio" chastising the alleged irresponsibility of the producers for conjuring up a night of terror.

The international atmosphere didn't help. The United States was still in the throes of the Great Depression when joblessness and hopelessness were omnipresent. Moreover, the looming threat of fascism across the Atlantic likely contributed to tensions, and the susceptibility of an audience to absorb disinformation.

Though a great deal has changed in the decades since that fateful October night, the memory of the broadcast still lives on in the fabric of West Windsor. Although for years, many residents were embarrassed that our town was caught up in this incident, by 1988 – half a century after the original “panic broadcast” – our town had fully embraced this part of its identity. Following days of festivities, the township unveiled a 7.5-foot-tall bronze bas relief sculpture in Van Nest Park. The plaque was inaugurated during a three-day ceremony jam-packed with events, including a formal dinner, art and planetarium shows, the burial of a time capsule, a bike race and a parade.
​
Other community ventures still commemorate the infamous broadcast. Grovers Mill Coffeehouse in the McCaffery’s complex features a cornucopia of War of the Worlds paraphernalia. The West Windsor Arts Council features a 12-foot sculpture by Eric Schultz called “Scoutship” at the corner of Scott Avenue and Alexander Road. And, of course, the Historical Society of West Windsor retains newspapers dating back to the original broadcast, as well as memorabilia from subsequent celebrations.
To this day, the “War of the Worlds” broadcast remains one of West Windsor’s best-known historical elements, and a point of pride.

​With those benefits in mind: bring on the next invasion! 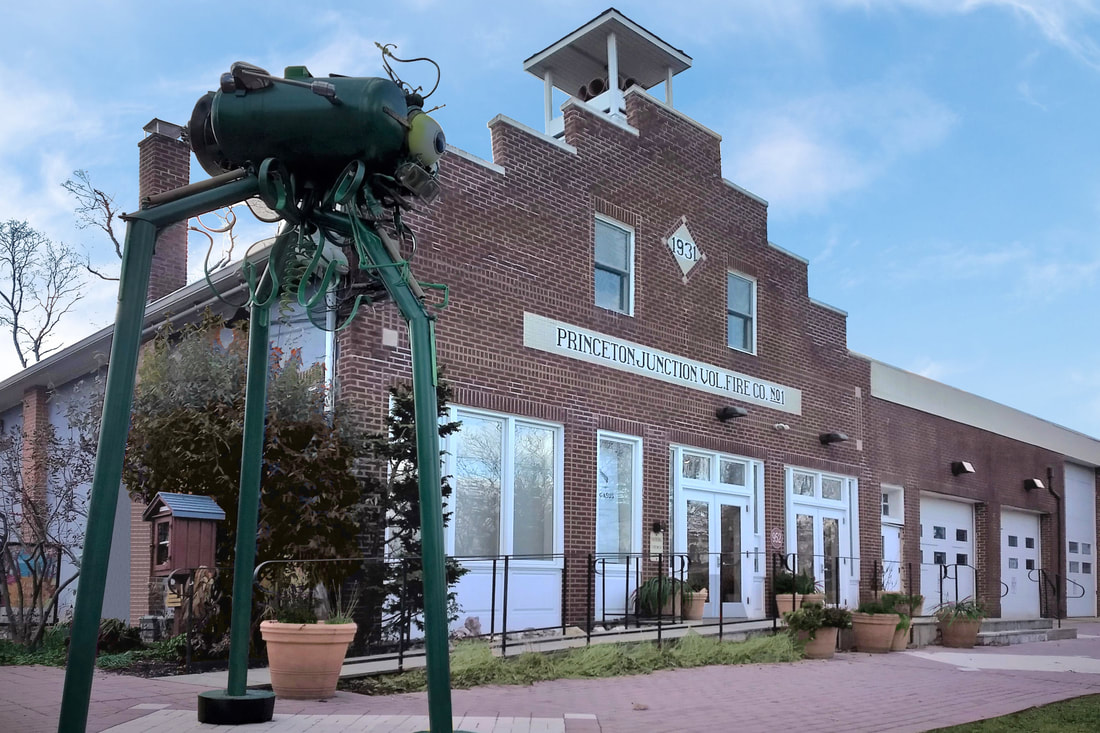