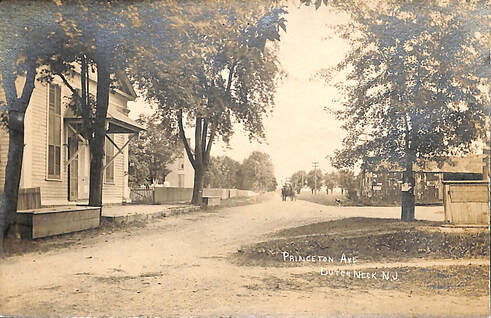 West Windsor, like any other town, has always had some individual or organization dedicated to the preservation of law and order. The earliest township meetings show the appointment (or, perhaps, "election by acclaim") of constables whose job was to enforce laws and mediate conflicts.

However, given the rural identity of the township until the late 1900s, crime was slightly different. Theft of farm animals and equipment, public drunkenness, and "rowdyism" were the most common recognized crimes in the township during its early years.

in 1939, the Federal Writer's Project published "Old Princeton's Neighbors," which explored some of West Windsor's historic villages. The publication mentions the West Windsor Pursuing and Detecting Society in Dutch Neck, incorporated in 1882 to apprehend horse thieves. However, by the mid-1960s, when the township decided to name the new elementary school after Maurice Hawk, his membership in the West Windsor Pursuing and Detecting Society was mentioned with a note that the organization had been disbanded when automobiles made horse transportation obsolete. 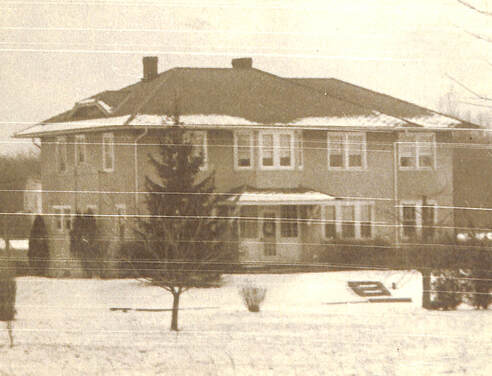 The Gabel Residence, which housed state troopers in 1946
In fact, in 1929, there were already 26,500 automobiles in the United States. This number of vehicles required well-paved roads, which allowed enterprising criminals to travel far and wide. Given that local police departments were, and are, limited to controlling crime in their own township, an inter-municipal force began to be seen as increasingly necessary.

At first, the New Jersey State Police Department was made up of two troops: Troop A in Hammonton covered southern New Jersey, and Troop B, in Netcong, patrolled the north. in 1928, Troop C was added to cover central New Jersey. Troop D was added in 1955 to patrol the turnpike, the same year that Troop E was established to monitor the Garden State Parkway.

Until 1968, West Windsor had no dedicated police force of its own and thus fell under the jurisdiction of the New Jersey State Police. Substations at Princeton and Hightstown allowed the State Police to patrol roughly half the township. Other troopers were housed within our municipality's borders. Between April 30 and September 1946, troopers were housed in the home of Mrs. Mary Gabel, on the southeast corner of Route 1 and Meadow Roads. Even more troops were stationed in a house at the corner of Alexander Road and Brunswick Pike. These buildings stood until the late 1900s, when commercial and residential development, as well as the construction of the Alexander Road overpass over Brunswick Pike, necessitated their demolition.
​ 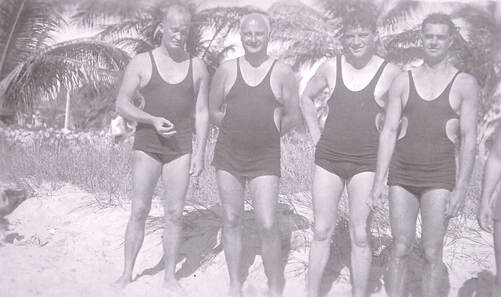 Off-duty state troopers, 1930s - incl. Oliver Gable on the right
The township began experimenting with a part-time police force in the 1950s. In 1960, this department consisted of Chief Matt Mathes, who operated out of his home, as well as Constable Wesley Holman and Special Officers Wendell Bleacher, Paul O. Blaney Jr, and Jack Robbins. A member of the township committee acted as Police Commissioner. He coordinated patrols and was a liaison with the New Jersey State Police.

These Constables continued to service the township after the West Windsor Police Department was formed. However, as the large developments of the 1960s began to appear - starting with Colonial Park on Penn Lyle Road - a realization emerged that more, and full-time, staff would be needed.

At this time, West Windsor was governed by a Township Committee. Each January, one of the Committee members was selected to be the mayor for a year. In 1966, the mayor was Malcolm Roszel (whose family owned a large turkey farm across Village Road East from the Dutch Neck Elementary School), with T. Alvin Carson, Arthur Everett, Eli S. Firth, and William Stuart as the Committee members.

At the township committee meeting on December 29, 1966, William Stuart reported that crime had skyrocketed by 67 percent and accidents by 10 percent over the past several years throughout the state. Given that West Windsor was a growing community after World War II, he recommended that a full-time police force be established by the municipality.
​

The June 1960 Lions Club Newsletter shows the township's first police car with Chief Matt Mathes, Constable Wesley Holman and Special Officer Wendell Beacher being congratulated by Police Commissioner Francis J. Ward.
Stuart proposed a method to select the first full-time Chief of Police: that the prospective chief be required to take an examination given by the New Jersey State Police, whereupon the chosen Chief would be appointed in 1967. Ultimately, the police force consisted of this head, as well as two or three patrol officers nominated by the Chief and approved by the Township Committee in 1968. In the interim, the aforementioned part-time police force would continue to serve the township.

In August of 1967, notice of written and oral tests for applicants for Chief of Police was published. In October, it was reported that 15 applicants took the test for the position, and that five finalists had been chosen to be interviewed by the Township Committee.

Finally, on January 1, 1968, Francis J. Maguire was appointed as West Windsor Township's first Chief of Police. Known to be tough but fair with a strong work ethic, he expected perfection and professionalism from his officers. Because he wanted employees he could mold to his image for West Windsor, he opted to hire people (with the exception of his first two officers) with no previous experience.

Maguire was strongly interested in community service, promising the Township Committee that the municipality would be patrolled 24 hours a day by the end of 1968. He also enjoyed taking groups on various hiking, mountain climbing, and white water rafting trips.

On February 12, 1968, Chief Maguire recommended that Frank Cox (later Chief of Police himself) and Allen Bankert be hired as patrol officers, effective March 1, 1968.

The establishment of a dedicated municipal police department with only three officers meant long hours and weekend overtime. Fortunately, some of the part-time officers also stayed on during weekends to help out. In addition, Constable Ron Black acted as Court Officer when the Township Court was in session.
​ 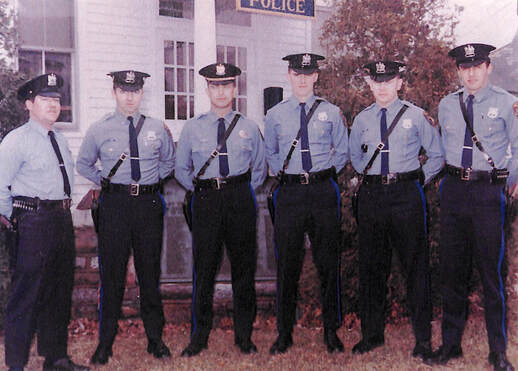 WWPD, 1969. Left to Right: Ronald Black, Frank Cox, Frank Maguire, Clifford Mauer Jr., Allen Bankert, Frank Pannick.
Despite the department's importance, there was no dedicated police headquarters for the first 26 years of its existence. Until then, the contingent was housed in the old Town Hall in Dutch Neck. As no jail cell existed in the building, criminals were often handcuffed to radiators and pipes to contain them. It was only in 1977, with the then-recent construction of the present Municipal Complex, that the West Windsor Police Department moved (close) to its current location, and only in 1994 that a dedicated police headquarters (still used in 2019) was erected. In fact, the current municipal building, at the corner of North Post and Clarksville Roads, still contains a few jail cells deep in the basement of the building - a holdover from when the police operated out of the edifice.

In January 1970, Frank Cox was appointed to Sergeant. A decade later, he became Chief of Police after the retirement of Frank Maguire, after whom the first dedicated police facility was named when it was constructed in the mid-1980s. Cox continued to serve for over two decades, adapting the force to the extreme growth the township experienced the 1980s and beyond, until he retired in 2001, after almost 40 years of service. The current West Windsor police building was named the "Frank Cox Police Facility" in his honor. Cox was succeeded by Joseph Pica, just weeks after the September 11 terrorist attacks. Pica, who had received his badge in 1974, was succeeded by Robert Garofalo in May of 2017. Garofalo, who helped transition the department to the digital age, recognizing the important of real-time responses and communication, continues to serve as Chief of Police, overseeing a force of about 50 officers.

A major part of the West Windsor Police Department's philosophy, developed by Chief Francis J. Maguire and continued to this day, is the department and community should work together. An example of this policy is the Community Policing Unit, which works with West Windsor residents to provide information and education on safety, security, crime prevention, etc.
​ 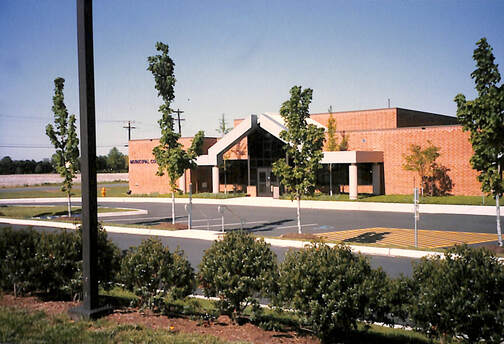 West Windsor Police Headquarters in May 1996
In addition, the Domestic Violence Victim Response Ream was established in 1998 to address one of the nation's most hidden problems. After 40 hours of training, community volunteers accompany police and emergency response teams on cases involving domestic violence. These volunteers offer counseling and support to victims on the spot, until they can be comforted and treated by professionals.

Yet more initiatives exist. The Police Youth Academy is a program for children who want to lean about the police's role in the community. "Operation Blue Angel" was started as a way for police officers to assist senior citizens living alone. Education on suspicious packages, emergency preparedness, bicycle registration, and firearms are offered by the force. Animal control operates under the department's jurisdiction. Finally, in an increasingly digital world, internet safety courses are offered by the WWPD, in addition to real-time updates concerning emergencies, traffic, power outages, etc. on the department's website and social media.

Although the West Windsor Police Department has evolved dramatically over the centuries - from lone sheriffs and constables addressing agricultural theft to a force of 50 officers and a myriad of community members serving a multifaceted role in the community - its importance to West Windsor has been timeless.