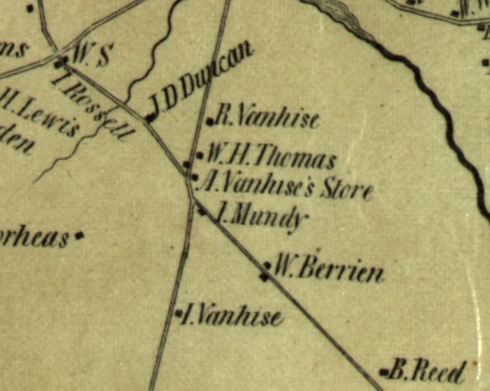 Since its earliest settlement, West Windsor has been home to almost a dozen independent village clusters, each acting as the economic and social centers of their surrounding farmland. From the vast expanses of farmland in Clarksville to the bustling rail line of Princeton Junction to the alien invasion of Grovers Mill, a myriad of factors have resulted in the manifestation of distinct identities for each of these hamlets.

​   However, there is one unofficial "village" not covered in the "Villages" section of this website. Too small to be considered a true social hub, VanHiseville developed in between Princeton Junction and Dutch Neck, at the intersection of what is now Hendrickson Drive and North Mill Road. At the time, the two streets - the latter simply called "Mill Road" and the former being the old route of Princeton-Hightstown Road - cut through the crossroads community, which began to see settlement starting in the 1800s. An 1849 map of West Windsor shows a small collection of buildings around this intersection.

An "A. VanHise" is shown as operating at the northwestern corner of the intersection of the two roads, where 6 North Mill Road - presumably constructed in 1900 - now stands. This was almost certainly Abraham VanHise, who owned farmland around the area and held positions in the West Windsor government for a number of years around 1850. Two oaths of office of his are shown below:
​   During the operation of the Trenton-New Brunswick "Fast Line," a conductor observed the inordinate number of pigs owned by a local farmer who owned land in what is now the West Windsor Community Park. He gave the location the disliked name of "Pig Town," whereupon the name stuck, likely to the farmer's dismay. Even now, the name still lingers as the unofficial moniker for the Trolley Line Trail's brige over Bear Brook: "Pig Town Bridge."

​   While the village of VanHiseville has lost its crossroads identity, the area still remains home to a few old buildings: 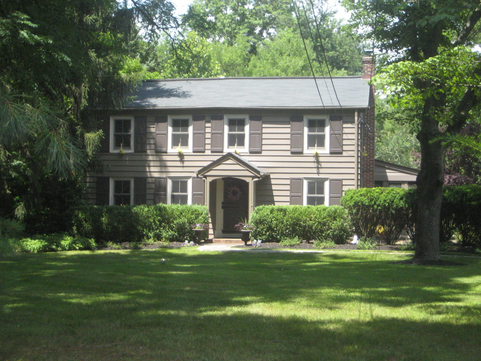 This house was originally a two-room house on an apple orchard. According to town legend, it, like 221 Southfield Road, was another “safe house” that participated in the Underground Railroad of the 1800s, helping runaway slaves escape to freedom. The 1849 map of West Windsor shows ownership of the property by a "J. D. Duncan," while the 1875 map names "Jb. Hendrickson" (possibly after whom the street was named) owning a  22 acre orchard. 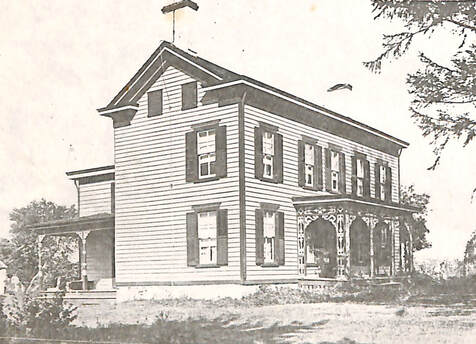 Located at the northwestern corner of the intersection of Hendrickson and North Mill Roads, this yellow 5 bay center hall plan I house dates from the first half of the 1800s. It seems to be shown on the 1849 map with no name of who owned it, and on the 1875 map as being owned by a "Jas. Wykoff." The adjacent photograph, taken between 1870 and 1892, shows an elaborate Victorian porch (now missing) on the oldest portion of the house.

The building may have served as a stagecoach stop for weary travelers moving between Princeton and Hightstown. Its oldest part - the two story main block closest to the intersection of Hendrickson Drive and North Mill Road - possibly dates from the early 1800s, while the newest additions are from the latter half of the 1900s.
​ 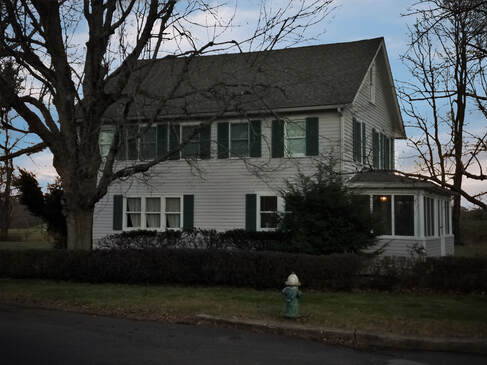 This building was constructed c. 1900, according to township tax records. It stands on the exact site at which Abraham Van Hise's store​ sat, and where "Pr. Wykoff" owned a house. 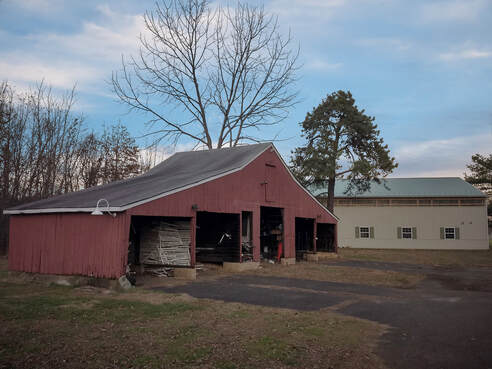 The house that sat on this property used to be located to the right of the driveway, close to the road. Reputedly constructed around 1803, this now-gone 5-bay, 2 story clapboard house sat next to a guest house, a 2-car garage, a 2-story barn, a 1.5-story wagon shed (with a corn crib), and a small utility building. Only the wagon shed remains; the property is now used by the Parks and Recreation department.

This house was one of many in the township that were demolished to make way for newer developments - this time, the West Windsor Community Park. However, despite the nature of the project, protests still abounded over this building's destruction. A letter to the editor of the Princeton Packet in October of 1996, written by Sarah L. Stillwell, who lived on the same street, reads:

"On Tuesday morning, a sad and shameful thing happened in West Windsor on North Mill Road. A beautiful 150-year-old farmhouse, once the property of Maurice Hawk, was demolished by the township authorities. Gone in a matter of minutes were the original clapboard siding, fireplaces, mantels, wide board wooden-pegged floors, and who knows what antique hardware, fixtures, and woodwork. Shattered wood and bricks were carted off. Nothing remains. I can assure you that it was not pleasant to watch. The house was on the edge of Community Park, which has been built on the very farmland this house oversaw. I had assumed, or rather foolishly hoped, that since the outbuildings and barns had been kept up and refurbished, township officials would soon restore the house itself. Sadly, they left it to deteriorate to its final fate.

I know the excuse is money. I guess we in West Windsor cannot afford to preserve a part of our history - one small house (by current West Windsor standards), but one with charm, character and style. It was one of the few original farm houses left. Shame on all of us for destroying it without understanding or hesitation. I hope West Windsor's decision makers will use better judgement, more creativity, and more respect for their heritage before the next demolition day."

While one may argue about the prudence of demolishing this particular farmhouse, the abstract notion of preservation is an important one in a township as old as West Windsor. Learn more about how the Historical Society of West Windsor, the municipality, and other organizations are working to memorialize the heritage of our township by clicking here!