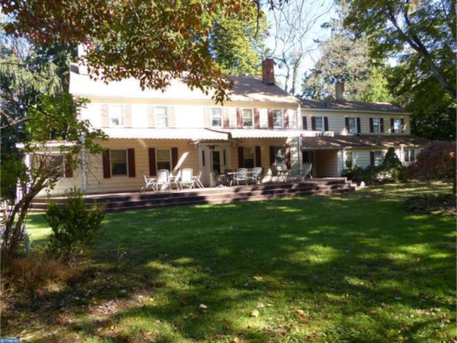 As one drives throughout West Windsor amid myriad suburban housing developments, one might be tempted to think of our town as relatively new – 60-70 years old at best. Yet scattered throughout our town’s ~27 square miles are myriad structures that dispel this notion, telling of a far older municipality largely settled by the mid-1700s. One such gem is the old Rue Farmstead.

Nestled at the western end of Windsor Park Estates, 11 South Post Road – constructed in 1800 according to township tax records - can be easily overlooked as one drives by. After all, its driveway composes most of the property’s length and the house itself is tucked back hundreds of feet from the road, surrounded by a grove of trees. Yet this house is a memorial to some interesting aspects of West Windsor’s history. According to a 1988 survey conducted by Kinsey & Hand:

“This is a 2 ½ story, 5 bay center hall plan house with a recessed 4 bay wing. The house, although very altered… appears to be a large house of the eighteenth or early nineteenth centuries. On the main block, the narrower spaced easternmost 3 bays suggests that the main block may have been built in sections. This is similar to houses at 838 Village Road West and the house on Robbinsville Road (both long gone in 2020)”…”Southwest of the house is a large dilapidated barn , probably an early twentieth century dairy barn. There are a series of smaller barn buildings creating a courtyard”…”The size of this house and its double pile center hall plan suggests this was one of the more substantial, and possibly more high style, houses in West Windsor. Unfortunately, extensive modernization obscured original character and removed architectural detailing. The large barns suggest agricultural prosperity through at least the beginning of the 20th century, but their present condition (as of 2020, long since restored) reveals decades of disuse.”

However, this has changed in recent years, as we will explore. Now, onto the history... 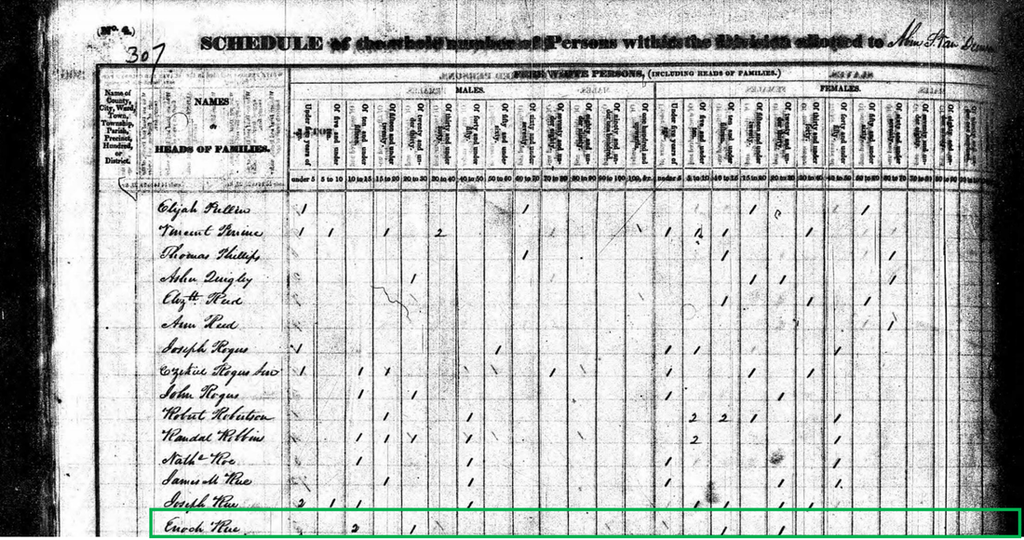 The first known owner of the property was a local farmer named John Covenhoven. He is shown, by an 1835 deed, to have sold it to Enoch Rue, who we will explore shortly. John Covenhoven was either the son or grandson of one of the original settlers of West Windsor - the Covenhoven family - who, along with the Schenck Family, purchased about 6,500 acres in present-day West Windsor west of Penn-Lyle Road and north of the Assunpink Creek from the sons of William Penn (founder of Pennsylvania) in 1737. Both families are still around, although "Covenhoven" (which, like "Schenck," is a Dutch name whose families originally immigrated to the New World in the mid-1600s) has long been transformed into "Conover" in the West Windsor area. 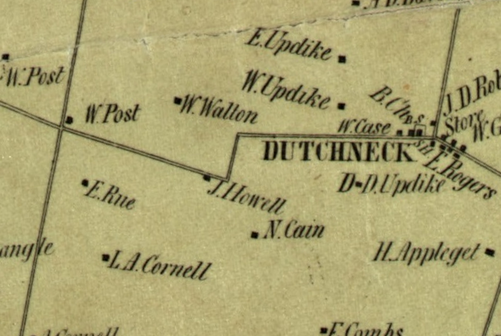 An 1849 map of Mercer County, drawn by J. W. Otley & J. Keily, surveyed by Lloyd Van Der Veer, and published in Camden, shows an “E. Rue” on the site. At the time, Enoch was married to Lydia Applegate Davison (1805/6-1865), who was buried alongside her husband in the Dutch Neck Cemetery. Just a year later, the 1850 federal census  showed significantly more information: Enoch, then aged 43 years old, was a farmer with $8,000 worth of real estate. He lived with Elizabeth Rue (44 years old), Jonathan Rue (17), Rebecca (5), Jonathan Davison (9), Liscomb Applegate (12), Margaret Otis (a 17-year-old Irish immigrant), and Joseph Hanley (a 27-year-old Irish immigrant).

An 1849 map of Mercer County, drawn by J. W. Otley & J. Keily, surveyed by Lloyd Van Der Veer, and published in Camden, shows an “E. Rue” on the site. At the time, Enoch was married to Lydia Applegate Davison (1805/6-1865), who was buried alongside her husband in the Dutch Neck Cemetery. Just a year later, the 1850 federal census showed significantly more information: Enoch, then aged 43 years old, was a farmer with $8,000 worth of real estate. He lived with Elizabeth Rue (44 years old), Jonathan Rue (17), Rebecca (5), Jonathan Davison (9), Liscomb Applegate (12), Margaret Otis (a 17-year-old Irish immigrant), and Joseph Hanley (a 27-year-old Irish immigrant).
​ 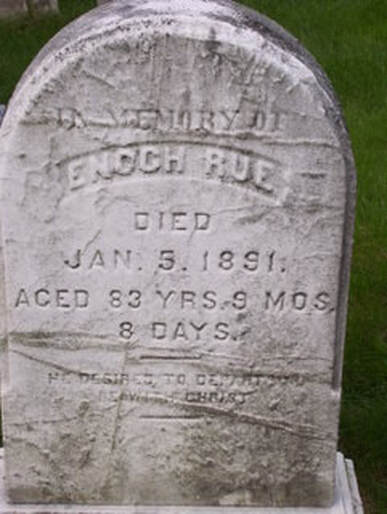 Enoch’s first wife was reputedly Lydia Applegate Rue Davison , whom he supposedly married on December 17, 1828. This information comes from Ancestry.com so further research is needed to corroborate this date. It is odd that he lived with an Elizabeth, aged 44, in 1850, for an “Elizabeth Shangle Rue Crater (who would have also been 44 at the time of the census) ended up as his second wife on January 15, 1869 - two years after Lydia’s death on August 7, 1867. Elizabeth herself was previously married to Frederick Honnel Shangle II and had a More research will be needed to explore this dynamic.

Enoch’s oldest son, Jonathan Davison Rue, is perhaps the most interesting figure in our story. Born on July 26, 1833 (the same year Post Road itself – now North and South Post - was constructed), he married Amanda Rue Shangle in 1852 (according to Ancestry.com, thus further corroboration is needed). He was raised in an agrarian community, and himself a farmer, Rue later dealt
in commercial fertilizers and farm machinery. He was educated However, more important to our story is his political career. Rue is first listed in the township minutes as Superintendent of the
West Windsor School District (predecessor to the West Windsor-Plainsboro School District, formed in 1969) from 1859-1861. The school district, formed in 1828, was still relatively young. From 1861-1862, Rue was a West Windsor Township Freeholder (well before the position became a County role in the early 1900s). From 1864-1865, and again from 1869-1874, Rue served as Judge of Elections for West Windsor. From 1876-1878 he was on the West Windsor Township Committee, and in 1877 was Inspector of Elections. And in 1878 and 1879, he was a member of Assembly from the then-Third District of Mercer County. The breadth of roles he assumed in West Windsor must have made him a prominent community member.

An 1875 combination atlas map of Mercer County, New Jersey (produced by Everts & Stewart of Philadelphia) show a “J. D. Rue” at the corner of Post Road and Village Road West, apparently owning 145 acres of land. It is unknown when exactly he inherited the land from his father, who still had ~16 years to live. Yet by 1885, he is listed as living in the Fifth Ward in Trenton in that year’s state census.

The following year, Jonathan Davison Rue – a Republican - was elected to the New Jersey State Senate with 7,260 votes, beating Democrat Jonathan Scudder (6,932 votes) and several other contenders. After “an exciting and hard-fought campaign,” as Volume 116 of the 1892 Manual of the Legislature of New Jersey put it, he was reelected in 1889 by a plurality of 105, with 8,244 votes.
Further research is needed to explore his impact upon the state. In 1891, he served on the Committees on Finance, Public Grounds, and Buildings and Federal Relations. He also served as a trustee and superintendent of the State Home for Girls in Trenton, where he was swept up in a conflict-of-interest scandal when the Trenton Bone Fertilizer Company – of which he was president – was awarded a contract for fertilizer by the State Home for Girls’ farm. Further information can be found in the newspapers sent with this analysis.

Not much is known about Gilbert himself. In 1885, Gilbert lived with his wife and son, as well as Agnes McGinley (5-20 years old) and Edward Reisler (5-20 years old). He is shown on a 1905 road map of Mercer County and a subsequent 1918 map, operating a farm across from the Rue’s decades-long neighbors: the Posts (after whom Post Road was named). By 1920, he had sold the property to Walter Stelle, ending over eight decades of Rue ownership.
​ 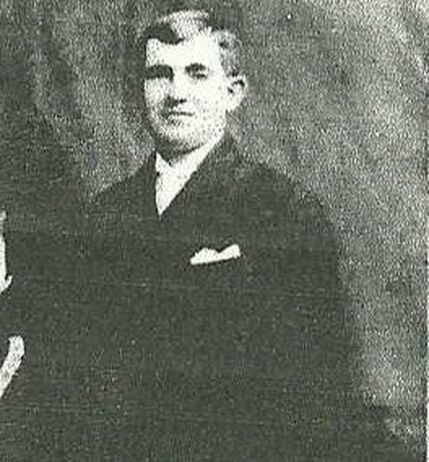 Not much is known about Stelle himself, either. He was born in 1884 to Thomas D. Stelle and Phebe A. Larrison in White Horse. He married Julia A. Walker (1887/8-1969). He was a dairy farmer who lived in Yardville in 1913 but shows up in West Windsor on the 1920 census as owning a property surrounded by the same neighbors as Gilbert. A 1938 tax map shows him owning a combined 62.20 acres, cut into two pieces by the then-functioning Trenton-New Brunswick “Fast Line” – a trolley line that operated from 1902-1937 and has long since been replaced by the PSE&G power lines running through the town.

Draft cards are available for him from both World War I and World War II (1942); further research is needed to see if he served. According to a March 31, 1983 obituary in the Messenger Press, he was a lifelong Mercer County resident and a director of the Mercer County Co-op for 32 years. He was also a member of the Sire Selection Committee of New Jersey, the Artificial Breeders Co-Op, and the Agricultural Extension Service. Like the Rues before him, he was also a member of the Dutch Neck Presbyterian Church. He and Julia had (at least) two children – Howard J. Stelle (1909-1999) and Helen W. Stelle (1907-????). The former is listed as “going to school” on the 1930 census at the age of 22; the latter is listed as a teacher.

Walter Stelle’s last known residency in Was Windsor was in 1947; he is listed as a resident of Mercerville at the time of his death at age 98. Alongside his descendants, he was survived by a “Mrs. Russel Tindall” of Edinburg – which, with Dutch Neck, is one of West Windsor’s historic hamlets.
​
Further Ownership

Not much is known about post-Stelle ownership. A 1964 West Windsor Township tax map shows Dutch Neck Lands, Inc. in possession of the same parcels depicted on the 1938 map. Yet the property and surrounding farms remained for decades (further research is needed to determine who lived in the building in the 1950s-2010s), only really beginning to give way to suburbanization upon the township’s population explosion in the 1980s.
​
Several families have owned the property since the early 2000s. The current owners have restored the house and corn crib, and now run it as Old Post Farm, ensuring that this vestige of West Windsor history remains preserved.