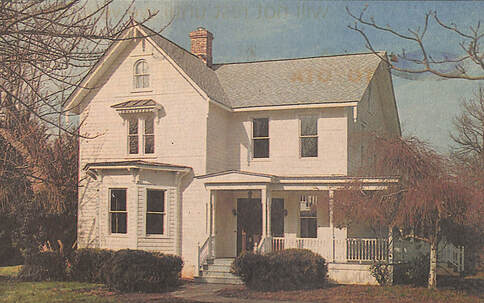 Located at 774 Village Road West, this 2.5 story, L-shaped Victorian house is set back from the road and surrounded by preserved farmland. Constructed in 1885, the building was once the farmhouse of the 35 acre John Robbins farm, which is now an Open Space parcel preserved by the township.

The building features a wrap-around porch and second-story balcony, both with delicate lacework on either side of simple square posts. This embellishment is relatively recent; towards the middle of the 20th century the building had been stripped of its erstwhile intricacy . Several outbuildings are no longer standing; the carriage house to the east is a new building. The adjacent barn is older - perhaps original to the property.
​
In 1908, the property was acquired by the George Clayton family. Eight years later, the James Everett family purchased the farm. One of the Everett children, Florence, was only four years old when she moved into the house. She grew to womanhood there and eventually married Frank Chamberlin in a ceremony held in the house's front parlor. Shortly thereafter, Frank and Florence inherited the house and made it their home until 1970 when they sold it to Charles Tyndale. The Chamberlins made a number of improvements to the house including the addition of modern heating and plumbing. They also installed "old growth" oak floorboards on the first story.

The Tyndales also updated the house, the most significant renovation being the installation of a modern kitchen in what was previously the dining room. Eventually, they separated two acres that contained the house and outbuildings from the rest of the thirty five acre tract and sold the property in 1975 to Alan Pribula. In 1981, Clark, Dee, and Jedd Santee moved into their newly-acquired property and began the process of renovating and enlarging the edifice - including the installation of a pine hutch in the entryway and floorboards (some dating back to the 1790s) in the upstairs balcony - both items taken from Clark's Civil-War era house in Gettysburg, Pennsylvania. Today, the house is over twice its original size!

Elsewhere on the property, the Santees removed all remaining outbuildings except for the main barn. They constructed the full length porch that connects the new building to the old, and restored the Victorian-era embellishments that were once missing from the structure.

In 2020, the house still remains a good example of West Windsor's Victorian-era architecture, and is a relic of a bygone century surrounded by a small farm that has seen hundreds of years of West Windsor History.
​
Play the slideshow below to explore more imagery of the Robbins House when it was owned by the Chamberlins!