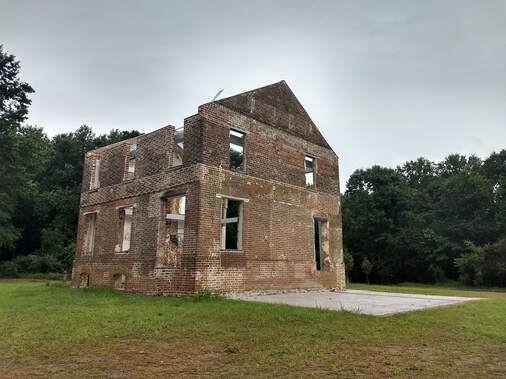 Standing off of Paxson Avenue in Mercer County Park is a ghostly edifice composed of three walls and a concrete base. This brick building, erected decades before the incorporation of West Windsor, overlooks a small clearing that also holds a recently-updated grave site, in which two stone markers sit. These gravestones act as memorials to one of West Windsor's early farm families - the Rogers - a wealthy clan traces that its roots back to 1680, when the first John Rogers, a Quaker immigrant from England, settled in Hamilton township. Since then, the family has been deeply intertwined with central New Jersey history, leaving behind numerous memorials to its members' lives. The John Rogers House is one such example.
​
Origins

The building, constructed of patterned brick, was apparently constructed in either 1751 or 1761. It derives its name from John Rogers, Jr., its earliest known occupant. Although his genealogy is somewhat obscured by the fog of time, Rogers was probably the son of an older John Rogers, who is known to have died in 1769 and lived in West Windsor on a property not far from the John Rogers House. 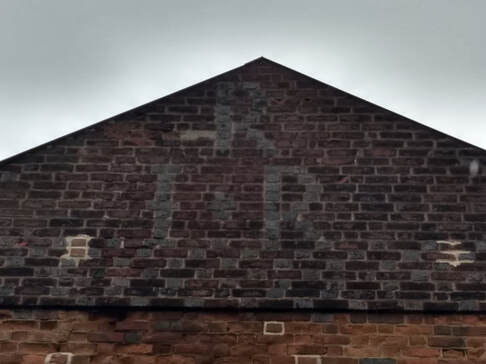 John Rogers, Jr.'s (hereupon referred to simply as John Rogers) land was bordered by the Assunpink Creek to the north (at what is now Mercer Lake, which was only created in the latter half of the 1970s), South Post Road to the east, and Robert's land to the south. It was upon this tract that his abode was constructed.

Near to the house, the family planted potatoes and other vegetables, and maintained a peach and apple orchard. In the surrounding fields, they grew wheat, rye, corn and oats, and manufactured hay. A neighboring pasture provided grazing grounds for horses and dairy cows, while pigs and poultry were penned in close to the barnyard. 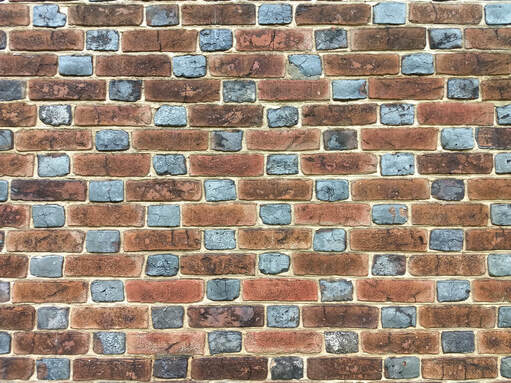 The John Rogers House, whose main section (the one remaining today) is a typical late Georgian, three-bay, side-hall block, exhibits a unique checkerboard pattern of black and gray Flemish bond brickwork. At the top of the eastern gable, grey bricks form a pattern that has been alternatively interpreted as reading either "1751" or "1761." If the former is true, then the house was constructed when the brothers jointly owned the land; if after, than it was solely a John Rogers asset. Either way, the lettering on the opposite (western) gable is unmistakable: "R J R." Reputedly, these characters, which stand for John Rogers Jr. and Rachel Rogers - his wife - were added during a later reconfiguration of the wall, suggesting that the house was erected prior to Roger's marriage to Rachel and later reconstructed. This lettering indicates pride in their home and serves as a reminder of the couple's existence to this day. It also serves to distinguish the John Rogers House as the only extant patterned brick house in Mercer County to show its homeowner's initials.

Because the house is constructed of elegantly patterned brick - in contrast to the much more common and cheaper wood-framed construction - it can be surmised that the Rogers family was wealthy. This brick pattern was associated with English Quaker families, and was made of locally-dug clay and sand fired in kilns. Depending on the location of the bricks in the kiln - also referred to as a "clamp" - the brick would either turn blue-black or red, resulting in the two colors seen in the house's construction. 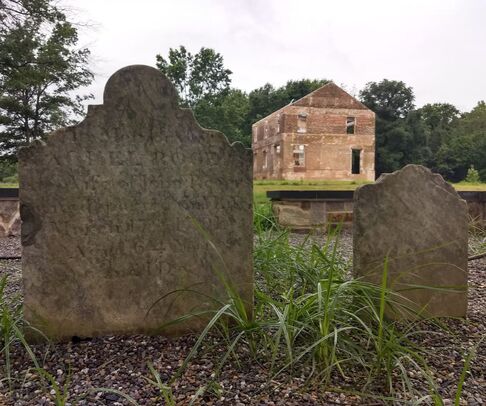 Windsor tax ratables between 1778 and 1793 show John Rogers, Jr. owning 150 acres of land and one slave. After he passed away c. 1793, John Rogers, Jr. - childless - willed his plantation to his nephew, Ezekiel (son of John's brother, Isaac). In return, Ezekiel was ordered to complete two tasks: first, he must free any slave older than 21, and care for any others until they reached that age, whereupon they would be emancipated. Secondly, Ezekiel was tasked with "clos[ing] the wall" around the property's burial ground, which is believed to have been located on the plantation, a few hundred yards away from the building.

This puts the burial ground in a different location than its current site, which, while not an actual grave, effectively acts as a memorial to the family. This grave features the tombstone of Rachel (who died in 1791) and a smaller marker upon which the letter "B" is etched, presumably indicating the death of an infant. All other Rogers family members who lived in the house are believed to be buried off the property - in line with common practice for farm families to bury their dead separately from their grave markers.

Ezekiel Rogers and his wife, Mary, had several children while operating the farm, including Ezekiel Jr., Jacob, and John (hereafter referred to as "John Rogers III" and born in 1804). The Federal Census of 1830 records the household as including one a boy and a girl under five years old, an adolescent between the ages of 10 and 15, a teen boy and a teen girl, both between 15 and 20, a woman between 30 and 40, and a man between 70 and 80 years old. 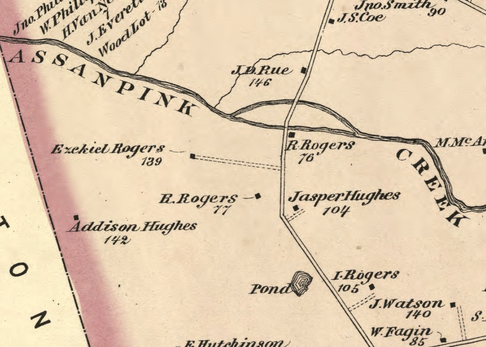 When Ezekiel passed away in 1833, his son John Rogers III inherited the house. His mother was granted her choice of three rooms in the house and one in the chamber, sufficient bedding, and the right to use "fire in the kitchen" and a portion of the cellar and garden. Mary was also bequeathed a cow and further entitled to meat and grains.

By 1840, the Federal Census recorded seven people living in the house. Nine years later, the 1849 Otley and Keily Map of Mercer County labeled the house under ownership by "J. Rogers." According to Woodward and Hageman's History of Mercer and Burlington Counties, John III would serve on the township committee between 1851 and 1852.

In the same decade, many physical changes to the John Rogers House were undertaken. The building was re-roofed, windows were replaced, the end wall chimneys were removed, a new cornice was installed, and a dormer and front porch added.

John Rogers III died around 1870, around the age of 64, a few years after selling part of the farm to his son, Ralph. Mary remarried and subsequently re-deeded the home to the heirs of her late husband. In 1872, Ezekiel Rogers (who, born c. 1837 was John Rogers III's son, Ezekiel Roger's grandson, John Rogers, Jr.'s great-grandson, and John Rogers, Sr.'s great-great-grandson) acquired the property for $6,500. Ezekiel, resided in the house with his wife, Sara M. Vanness Rogers (born c. 1842). In 1875, the Everts and Stewart Map of Mercer County indicated his ownership of the then-139 acre property. In 1885, the property passed to Ezekiel's half brother, William T. Rogers (born c. 1845). 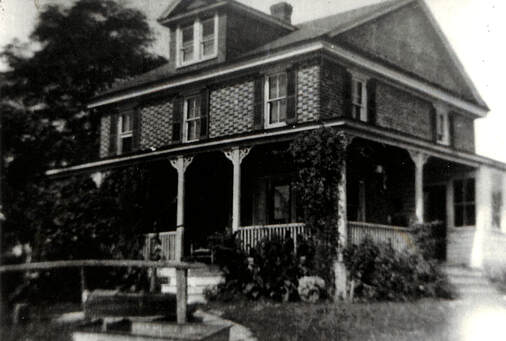 In the latter part of the 19th century, traditional family farms in New Jersey began to diversify their production, owing to increasing competition from the enormous Midwestern agrarian industry. The Rogers were no exception; they began to increasingly rely on fruit, vegetables, and poultry to make a living. By 1880, the property featured about 800 peach trees spread over six acres.

William Rogers died of pneumonia c. 1903 after falling into a lake while cutting ice. He left behind a wife, Mary Allen Rogers, and a child, George Vanness Rogers. Following William's death, Mary sold the property - then about 97 acres - to Frank Schilke. According to Frank's son, Carl, his father removed headstones from the Rogers burial plot because he was tired of plowing around them. In addition, Frank added a wrap-around porch to the house and erected a stable, hay barn, tool shed, and hog pen on the property.

In 1931, Frank Schielke sold the John Rogers House to James and Jennie Sciarotta. Mr. Sciarotta passed away in 1965, whereupon his widow leased the farm and house to William Flock. Flock, in turn, rented out the house to various tenants, acting as its caretaker while he grew peaches, sweet corn, and tomatoes on the farmland, and planting an extensive peach orchard between 1962 and 1963. 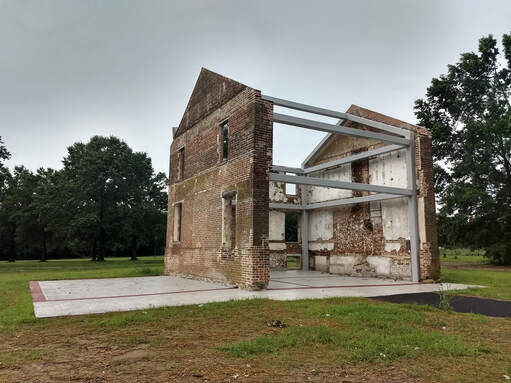 The End of an Era

In 1970, the property saw the end of over two hundred years of habitation, when it was deeded to the County of Mercer, whereupon the farmland was razed, sodded, and soon incorporated into the 2500+ acre Mercer County Park that was constructed starting in the mid-70s. In the decades since, the house had been left to rot, and has been the subject of years of debate between the township and county over who should restore the property. As a result, the building continued to deteriorate until 2015, when the Mercer County Park Commission approved a plan to salvage the exterior walls of the building and the adjacent cemetery.

As a result of recent salvation efforts, the John Rogers house still stands, albeit as a ghostly remnant of what it used to be, a reminder of the power of time to erode all things. Its one-story kitchen wing has been completely demolished, and is only now remembered in photographs and by a red outline at the ruin. Moreover, only three walls of the main block remain, supported by a robust steel support structure. Nevertheless, surrounded by four kiosks which elaborate upon its story, the building serves as an effective tool to learn about the township's early history, and one of its best-recorded families.