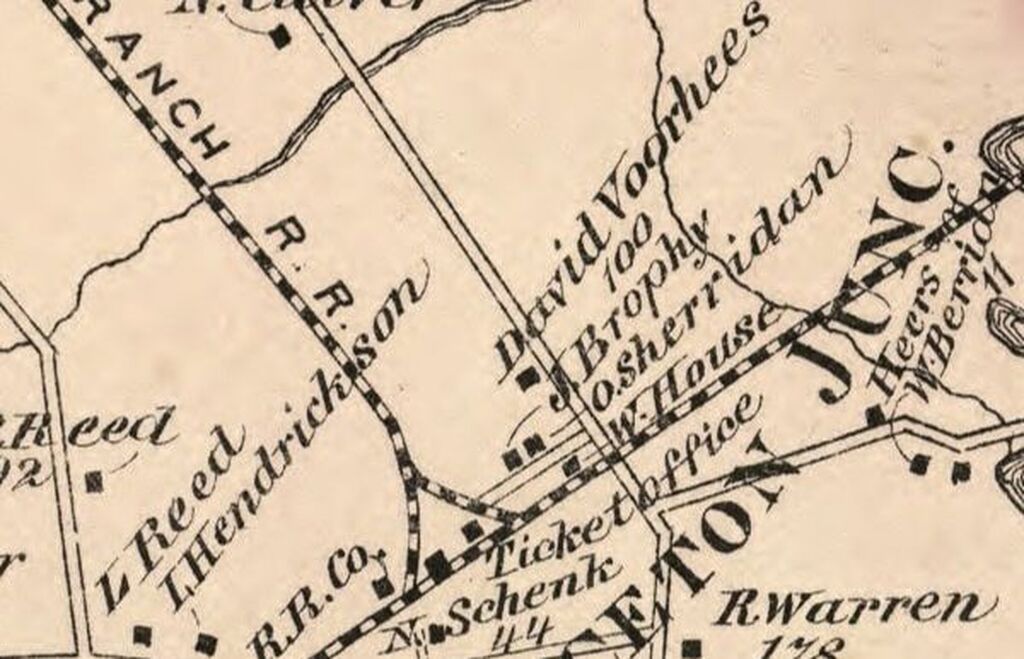 Close-up of 1875 Everts & Stuart map at the intersection of Alexander, Cranbury, and Princeton-Hightstown Roads 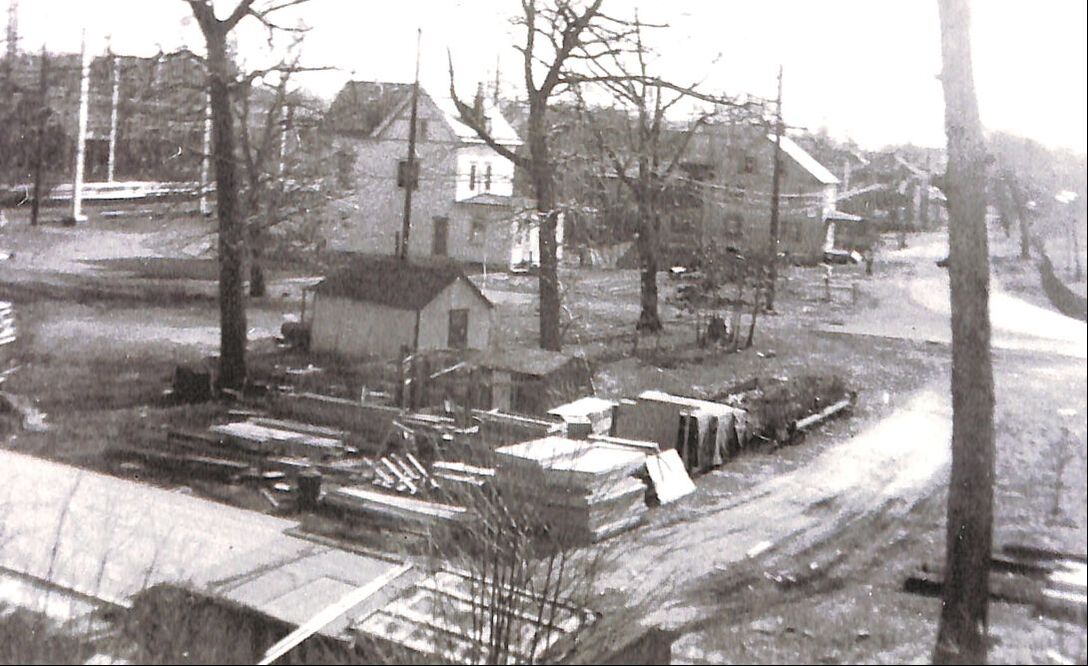 With the construction of what is now the Northeast Corridor and Dinkey train lines in the mid-1860s, a small cluster of houses adjacent to the tracks manifested at the intersection of Station Drive and Washington Road, west of Bear Swamp and north of the tracks.¹ At this time, Washington Road simple crossed over the railroad tracks at grade and ended at the intersection of Princeton-Hightstown and Cranbuy Roads.² The bridge at the intersection of Cranbury, Wallace, and Princeton-Hightstown Roads was to be built many decades later, effectively cutting off foot traffic to this cluster of buildings within Princeton Junction.³

In the early 1900s, a bridge of steel and wood was built over the tracks to accommodate horse-and-buggy and foot travel, and Washington Road's at-grade crossing was eliminated (it once ran through where the West Windsor-Plainsboro School District's school buses now park).⁶ However, the advent of car travel soon necessitated the construction of a permanent concrete bridge over the tracks, c. 1932, which was replaced in 1939.⁷ Station Drive has remained physically isolated from the rest of Princeton Junction ever since.

As of 2019, several buildings near the intersection still exist, evoking memories of a small village steadily doing business before the turn of the 20th century.

At the end of Washington Road, where a garage/repair shop now stands, Jacob R. Wyckoff operated a commodities business, dealing in crops such as grain, potatoes, coal, and hay.⁸ This enterprise had previously called Princeton Basin its home. However, in 1865, Wyckoff moved his business to Princeton Junction in order to take advantage of the recently-relocated railroad.⁹

A hay scale was located in the yard to allow local farmers to weigh their loads of hay without unloading it from their trucks. Subsequently, the hay would be compressed by a hay press, baled, and unloaded.¹⁰ 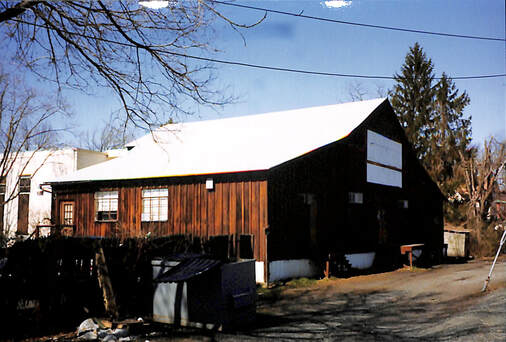 This unassuming building seems to be a post-war edifice from the front, facing Station Drive. However, the back of the building (facing the tracks) evokes a different story. This building, also owned by Jacob Wyckoff, functioned as a feed mill.¹¹ It was eventually sold to the Swinger Company, who still had the hay press, bought and graded potatoes, and bought hay and straw.¹²

The edifice was stuccoed over long ago, but its volumetrics still reveal its original form. 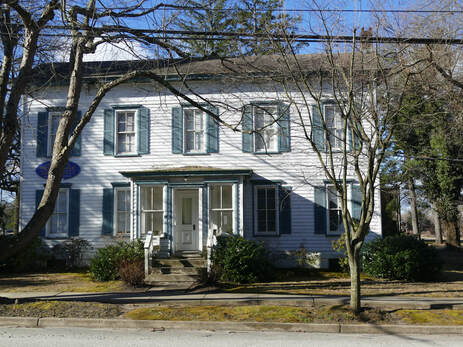 Local farmer David S. Voorhees first purchased this property, then a farm, in 1836. It remained an agrarian setting until 1865, with the construction of a new railroad route to replace the 1839 Camden/Amboy route.¹³ Voorhees took out an insurance policy on the property in 1861, covering a small house, two sheds, a blacksmith shop, and two barns.¹⁴ An additional policy four years later shows a larger barn, a cow house, a wagon house, and stables.¹⁵ The next year, a third insurance policy showed a significantly larger house than the original policy (34 by 51 feet versus 16 by 25 feet).¹⁶ Finally, a fourth policy in 1868 shows the first definitive documentation associated with the present house (earlier records do not necessarily indicate this specific structure existed).¹⁷

Future insurance policies show more expansions of the property's buildings. In 1883, Voorhees, then mayor of West Windsor, took out one last insurance property.¹⁸ The property remained in Voorhees family ownership until 1927, when the Hey family, owners of the general store at 33 Station Drive, bought the property.¹⁹ The house was converted to offices in the late 1900s.²⁰ As of 2019, a proposal for a "transit village" threatens the structure's existence.²¹ 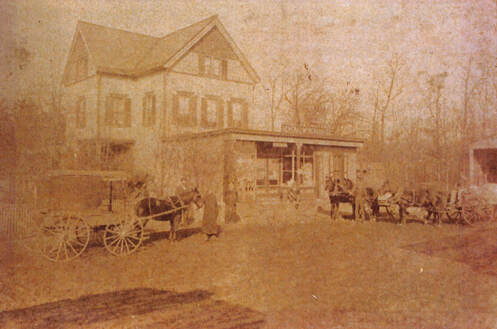 The Princeton Junction general store, located at the corner of Washington Road and Station Drive, was the go-to convenience shop of Princeton Junction.²² From food to clothing to tools of every trade, a myriad of products were available for purchase.²³ Woodward's "History of Burlington & Mercer Counties" of 1883 lists the owner of the general store from 1870-1883 as Owen Sheridan, D.B. Applegate, and Baker Hutchinson.²⁴
​
In 1884, the property was purchased and a new store constructed and operated by Issac Hey (pronounced "Hi), who also operated as the village's postmaster, as his predecessors had before him.²⁵

The property was later inherited by his sons Jacob and Isaac Voorhees Hey.²⁶ It is said that because one was Republican and the other Democrat, whichever party was in power, that brother was postmaster.²⁷ The family lived in 12 Washington Road across the street.²⁸

In 1943, the post office that had been located in the general store was moved to the store next to the firehouse in Berrien City (948 Alexander Rd), before bouncing around locations until its permanent location at the current municipal center.²⁹ The general store continued operations until Isaac's death in 1947.³⁰ The building was then sold to Louis Tamaro, who ran a barber shop in the front and rented the rest of the edifice as apartments.³¹ Beginning in the 1970s, when "Peking Express" moved in, the building has operated as a series of restaurants.³² In 2021, it is "Asian Fusion," whose owners bought the building from the owners of the "Good Friends" restaurant. 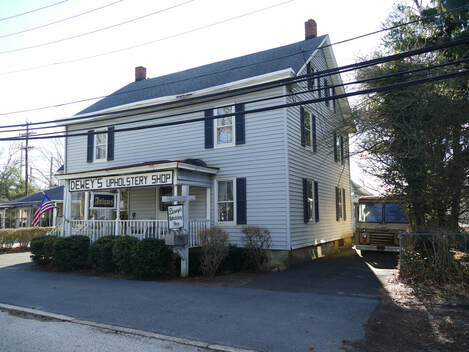 Although it may not look it today, this edifice functioned as a warehouse for the adjacent Issac Hey General Store at 31 Station Drive.³³ Hey, a retired jeweler from Newark, bought both properties from the heirs of Princeton Junction farmer David Vorhees in 1884, and likely constructed both edifices shortly afterwards.³⁴
​
The parcel was later granted to I. Vorhees Hey and Margarethe Hey, and after them, sold as part of a significantly larger parcel to Jacob Hey in 1927.³⁵  Philip L Gilmer of Princeton Borough bought the property in 1947, and later sold it to Charles J Weingart, Jr. and Dorothy R. Weingart in 1955 and 1958 (in 2 separate transactions), who turned it into Dewey's Upholstery Shop in the 1950s.³⁶ Today, the store is still occupied by Dewey's Upholstery Shop. Throughout its existence, this wood-framed building has undergone numerous facade renovations and expansions, although the original volumetrics can still be identified.​³⁷ 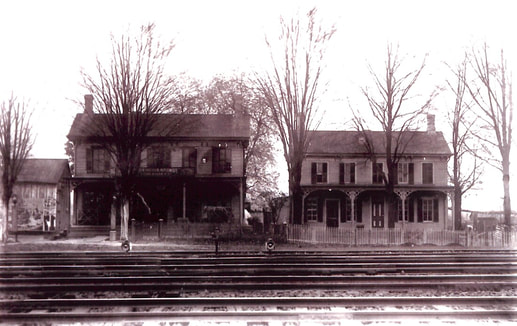 At one point, a building known as the Princeton Junction Hotel (or "Mahan's Tavern") stood on this site.³⁸ A 2-story, wood-framed edifice, it experienced numerous renovations and additions during its existence.³⁹ The hotel was operated by Edward W. Mahan, and during the 1930s, was rented by the Cox family.⁴⁰ Members of this family sold sandwiches, soup, and beverages to railway works during the construction that took place as part of the transition from steam to electric trains along the train line.⁴¹ Doubtless, the hotel enjoyed booming business due to its convenient location!

Issac Hey (also the proprietor of the nearby general store and its associated warehouse) purchased the land from David Vorhees in 1884 (the same man who sold him the land on which the general store and warehouse were alter built).⁴² Possession later passed to Jacob C. Hey in 1927, Philip L. Gilmer in 1947, James H. and Olga J. Hall in 1953, and finally to New Jersey Transit in 1998.⁴³

As of 2019, the site of the former store has been paved over with parking for the Princeton side of the train station near the Vaugh Parking Lot. Unfortunately, this building was torn down in the mid-2000s due to its deteriorating condition.⁴⁴
Railway Express (1930s)

​   In the 1930s, an office of Railway Express was built near the general store on what is now the bed of the railway.⁴⁵ This company, officially founded in 1918 by the US Government, found its heyday after WWI, delivering packages too large for post offices to handle.⁴⁶ Many residents eagerly awaited items ordered from the Sears, Roebuck catalogue arrived via Railway Express.​⁴⁷
Play the slideshow below to explore more of historic Station Drive!
Click here for citations!