Slayback Residence in 2018.
Historical Overview
Pictured above is 542 Village Road West in the historic West Windsor community of Dutch Neck. Possibly dating to the 1750s/60s,[1] it’s likely one of West Windsor's very oldest structures and also a member of the "100 Club". We don’t currently know who constructed this house. Its first known owner, however was Abel Slayback (1751-1829), as listed in a 1797 deed for an adjacent property.[2] Abel was married to a woman named Gette Fisher and likely inherited the property from his father, David Slayback (born 1720) after David's death in 1791. David and his family are said to have emigrated from Alsace, France to North America around 1733 via the Irish ship “Pink Mary,” to escape religious persecution of German Protestants.[3] By the 1770s, David Slayback and his family had moved to the West Windsor area.[4]

David’s son, Abel, was West Windsor’s very first Tax Collector and Overseer of the Poor when West Windsor formed in 1797. He was also an Overseer of the Highways and a Commissioner for Laying Roads shortly afterward.[5] In 1818 (by which time he had moved to Butler Township in Ohio) he sold the southeastern corner of his property to the Dutch Neck Presbyterian Church which, two years prior, had constructed their current house of worship on it at 154 South Mill Road.[6] This plot was just a tiny portion of Slayback’s entire 100-acre property, most of which (including the house pictured here) had been sold, seven years prior, to John G. Bergen, also member of one of West Windsor’s oldest families.[7] 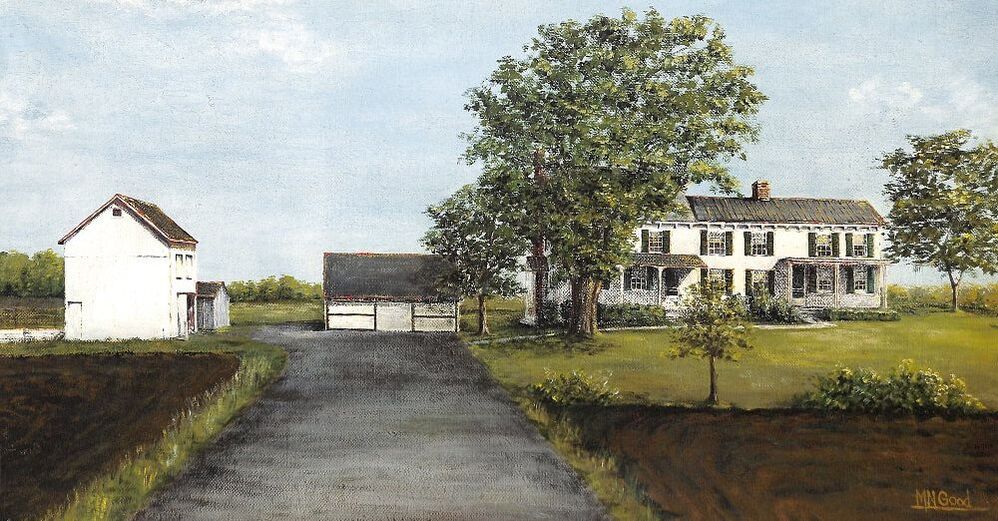 Painting of Slayback Residence in 1950s or 1960s. Courtesy of Kay and Clifford Reed.
After John died c. 1812, his heirs (William Nutt, Ellenor Bergen, and Rutes Bergen) inherited it and sold it to Joseph Nutt in 1818.[8] From there, it passed through the following families until William Updike's acquisition of the property:
The Updikes, too, had lived in the West Windsor area since the mid-1700s.[15] Through the 1860s-70s, William Updike was a Township Committee member, Poundkeeper, Judge of Elections, and Commissioner of Taxation Appeal.[16] Upon his death in c. 1882, his son, Levi, inherited the property who, in 1912, sold the property to Sarah E. and David D. Bergen and Carrie S. Cook.[17] They, in turn, owned the property until 1939, when it was acquired by Lester W. and Evalinda M. Reed.[18]​ The Reed family has owned the property ever since.

​In the 1980s, amid West Windsor’s rapid suburban growth, the LeParc II development was constructed on the Reed farm. Although virtually all of the farmland is gone, the house was saved by moving it a few hundred feet closed to Village Road West.[19],[20]​ There it sits at 542 Village Road West, next to Reed Drive North and Reed Drive South (themselves named after the Reed family), an icon to centuries of West Windsor history.
Go to Dutch Neck
Bibliography