The Historical Society of West Windsor operates out of the Schenck Farmstead/West Windsor History Museum at 50 Southfield Road.  The property has been continuously farmed since at least the mid-1700s and lies in the eastern half of West Windsor - part of a ~4,500-acre tract purchased from NJ Governor Andrew Hamilton by New York City goldsmith David Lyell (of “Penn-Lyle Road”) in 1697. Lyell and his family were absentee landowners and it is unknown if they even ever set foot in the land that would become West Windsor.

The likely first owner of an operational farm here was Cornelius Voorhies, who may have rented out the land at first from Fenwick Lyell, son of David. Cornelius' name appears on a 1731 map of David Lyell's properties and he is known to have purchased it from Fenwick in 1741 - around the time that West Windsor began to see its first large wave of colonial settlement. At the time, the property was over eight hundred acres! The farm likely passed through the Voorhies lineage until approximately the 1790s, when Samuel Fisher acquired it from the heirs of William Voorhies. From there, the bulk of the property was sold to Samuel's son, John S. Fisher, in 1803.

John S. Fisher was a West Windsor Township Commissioner of Appeal in Case of Taxation from 1823-1825. He is listed as having owned slaves in the 1830, 1840, and 1860 federal censuses. One of the last two known slaves in West Windsor, named Diana Updike, is listed in 1860. She may have been one of the last twenty slaves in the state. Diana may have been related to Pompey Updike - a laborer for the Fishers and one of the best-documented free Black residents in West Windsor, who was once buried under where the Dutch Neck school's eastern parking lot exists today.

John S. Fisher deeded the property - then around two hundred and fifteen acres of farmland - to his son Samuel and Samuel's wife Catherine in 1850. It was then sold to George and Elizabeth Young in 1863, to James H. Everett in 1865, and to Thomas S. Everett later in 1868.  An 1875 map of the township shows Thomas Brokaw living on, but not owning, the property. Finally, in 1899, John and Anna Schenck, who had rented the farm since 1888, purchased the then-104 acre property, including its farmhouse, barns and outbuildings. From then on, it became known as the "Schenck Farmstead." 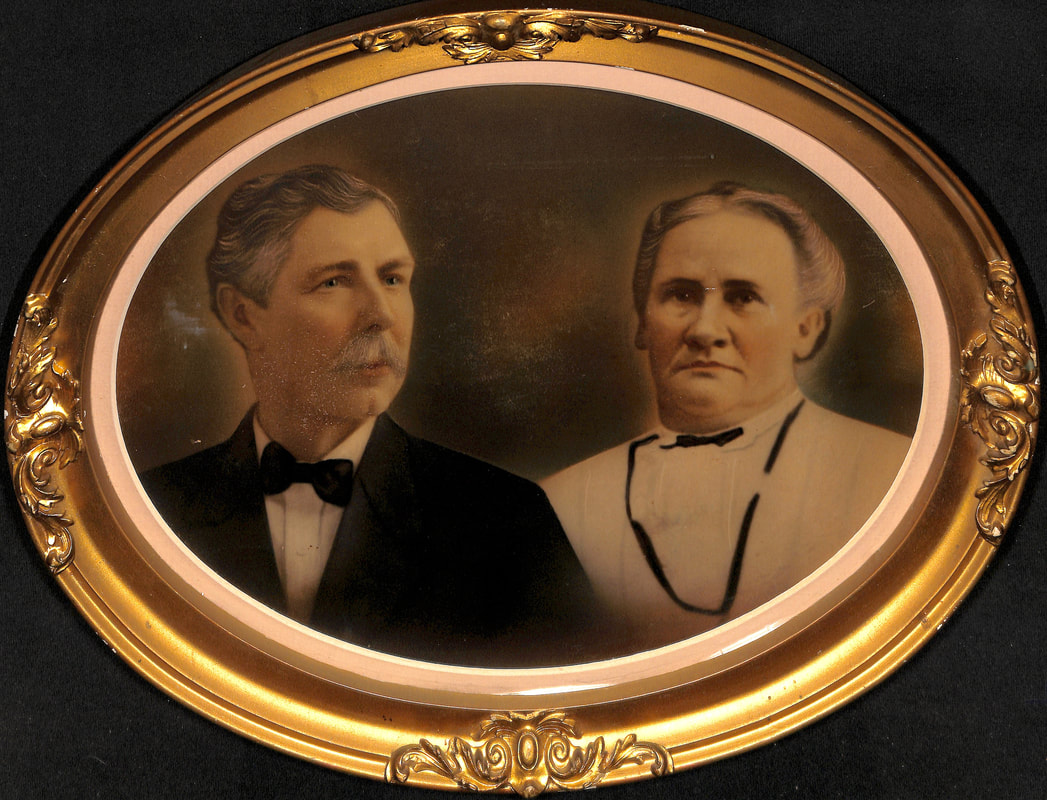 John and Anna Schenck.
23 years later, in 1922, John and Anna's son, Walter, and his wife Mabel purchased the farm. A map of how the farm was laid out in 1920 can be found here. Crops grown on the farm included hay, wheat, rye, potatoes, tomatoes, corn, and beans. There was a large kitchen garden behind the house which supplemented meals with additional fruits and vegetables. Cattle, pigs, chickens, and cows were also raised here and were used for a variety of purposes ranging from meat to manure to household products such as down pillows and leather.

Walter and Mabel had two sons - Wilton and Warren. In 1963, four years after Walter Schenck's death, Wilton purchased the farm from his mother and in 1971 sold it to Max Zaitz, a successful farmer who owned hundreds of land in the area, who rented it to various tenants. In 1991, Zaitz, generously donated the farmhouse and 2 acres of property to the township for its dual use as museum and operational farm. The next year, he donated an additional 115 acres. Over the years, its previously dilapidated farmhouse, barn, and outbuildings have been meticulously rebuilt, to preserve the heritage of this property and West Windsor history. The property officially opened as a museum in 2002.

Most of the buildings you see below are explored in their own sections on this website. Inside the barn, carriage house, farm house, and schoolhouse are thousands of artifacts, some centuries old and emblematic of the agrarian lifestyle that dominated West Windsor in centuries past. In addition are multiple exhibits exploring the history of the farmstead, the history of West Windsor and the surrounding region, and environmental/historical preservation. Please visit the Schenck Farmstead to gain a deeper understanding of the dynamics of the township from decades and centuries past!