Port Mercer c. 1905, courtesy of the Lawrence Historical Society. Bridge Tender's house on the right, next to inn. 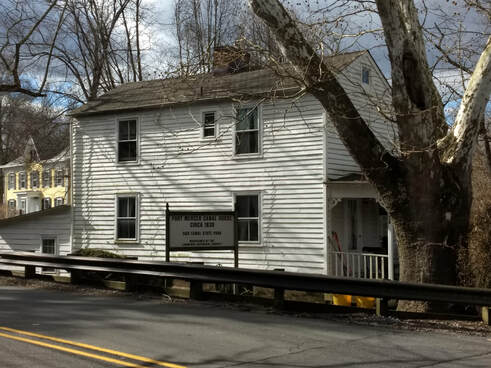 Located along Quakerbridge Road at the extreme western corner of West Windsor, this somewhat intact historic cluster straddles three townships: Lawrence to the south, Princeton to the northwest, and West Windsor to the east. Its history is inextricably tied to the canal that it borders, and from which its name was derived.¹

No community existed here before the canal’s construction. However, the locale’s still played an 18-th century role in national politics. As with Clarksville, this area bore witness to George Washington’s January 3, 1777 march to Princeton.² The ensuing battle with the British on the Princeton Battlefield on the same day would mark the second victory (after the Battle of Trenton) within a week’s span that turned the tide of war, and consequently, the development of the nation.³  During this battle, General Hugh Mercer, one of Washington’s closes compatriots, was killed.⁴ It was after him that the village of Port Mercer was named.⁵
​
With the construction of the Delaware and Raritan Canal in the 1830s and its opening in 1834, Port Mercer developed into a thriving community.⁶ One of the first structures to be built after the canal was the bridge.⁷ Although today it is an unremarkable construction, this was not always the case. In its original form, the bridge turned on a swivel to allow barges to pass through the town.⁸ This job required a bridge tender, whose house at 2478 Quakerbridge Road is now in use as a museum operated by the Lawrence Historic Society.⁹ 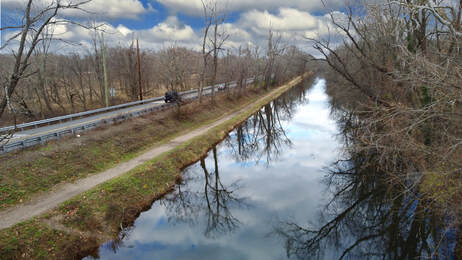 The general store, later owned by C. H. Mather, was neighbored by an accompanying barn/warehouse.¹³ Behind the store-turned-inn was a coal yard run by Evan Cook and Jordan Allen.¹⁴ A warehouse was used for material storage and served as loading platforms for the local community and railroad.¹⁵ Cook also ran the local saw mill.¹⁶

Mr. Crater’s steam-powered saw mill possibly provided materials for these structures. It operated for 12 years starting around 1848, after which it unfortunately burned.¹⁷ In addition to his business endeavors, Mr. Crater also served on the West Windsor Township Committee beginning in 1848 and became Justice of the Peace in 1850.¹⁸

On April 13, 1861, Daniel Howell was appointed postmaster of Port Mercer by Abraham Lincoln.¹⁹ The post office was located in a room of the bridge house. It was later moved to the general store.²⁰​

No school was located in Port Mercer. Consequently, young children often went to the nearest public school in Clarksville.²¹ Older youth would walk to take trains to Princeton or Trenton.²²
​
In the middle of the 19th century, Port Mercer housed an inn, a general store/post office (much like those in Dutch Neck and Edinburg), a saw mill, a turning basin (much like those in Princeton Basin), derricks, a warehouse, a bridge, a bridge-tender’s house, a train loading station, a warehouse, a lime kiln (operated by Charles Gillingham), a ball field, mule sheds, a race tracks, and several family houses!²³ Port Mercer was a favorite stopover for food, drink, rest, and recreation.²⁴ This development, spurred by the traffic of 1400 barges traversing the canal every week, marked a golden age for the community throughout the mid-1800s.²⁵ 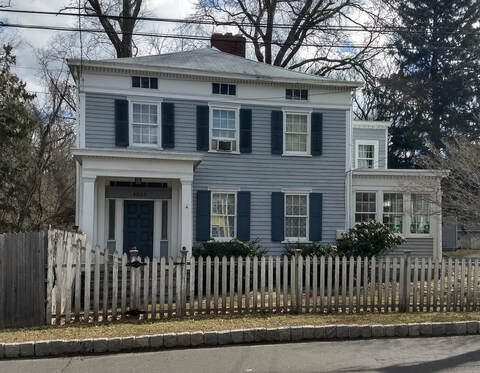 4263 Quakerbridge Road, c. 1820-1840
Residents of Port Mercer devised clever ways to maximize profit. According to local legend, well-timed delay in the opening of the swinging bridge could lead to the entangling of mules’ tow lines, potentially pulling them into the canal.²⁶ Conveniently, local boys would quickly save the mules from drowning and, feigning surprise, would receive a reward from the mules’ owners.²⁷ Another scheme involved lining up bottles and cans on fences, enticing bargemen to throw lumps of coal at these makeshift targets, to be pocketed by locals.²⁸

That being said, the relationship between bargemen and locals was predominately cordial. Whenever a steamer blew its whistle, children and adults alike would run out to wave to the people on deck.²⁹ When a boat stopped in town – and they often did - children gleefully rushed aboard to inspect and play on the boat.³⁰ While operation hours of the bridge, and thus the boats, were from 6 am to 6 pm, this did not dictate the life of the town.³¹ Rather, traffic would relocate from the canal to the inn.³²

Starting with the construction of the rail line, the canal steadily lost commercial traffic. By the early 1900s, cargo transportation was no longer profitable and commercial barges were replaced by pleasure boats and seasonal yacht relocation.³³ However, Port Mercer, with its bucolic atmosphere and convenient venues, remained a favorite stop well into the 1930s.³⁴
​
In 1914, 12 markers were laid throughout Lawrence, Hamilton, West Windsor, and Princeton to commemorate George Washington’s seminal march.³⁵ Two plaques reside in Port Mercer: the first within the median in the middle of Quakerbridge Road between the canal and Province Line Road, and the second within Princeton, just past the canal at the second bend in the road after the drawbridge when heading into Princeton. 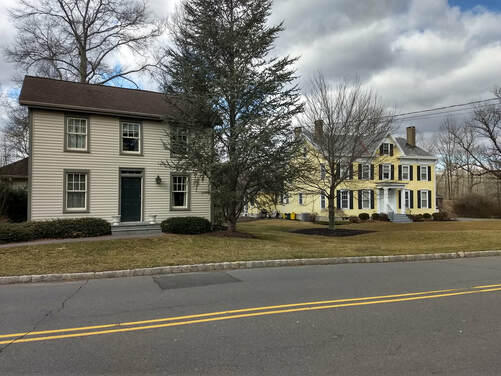 Left-right: 4262 & 4276 Quakerbridge Road, c. 1800
In 1932, the Delaware and Raritan Canal ceased operation.³⁶ Unfortunately, since then, various houses within Port Mercer fell into disrepair or were demolished, as newer housing developments and commercial buildings were constructed along Nassau Pavilion and Province Line Road on the eastern side of the canal. The western side of the canal remains untouched.

Although much of the community is now gone, the remaining buildings still bear witness to this once-thriving hamlet. In 1973, the Delaware & Raritan Canal was placed on the National Register of Historic Places.³⁷ Also now listed is the bridge tender’s house, a center-chimney style house.³⁸ Other residences, while not individually designated, exhibit unique architectural characteristics that are largely unchanged from their original designs.³⁹
​
Hidden but full of memory, an ancient green ash tree - reputedly the largest of its kind in the state - looms behind 4273 Quakerbridge Road. Over 60 years old when General Washington marched towards his fateful battle, over 120 when the community first developed around the canal, and over 300 years old at the time of this writing, this tree has seen centuries of transformation of Port Mercer, and consequently, West Windsor: from sleepy pastoral community to thriving 19th and 20th century development to the 21st century’s busy commuter town.⁴⁰ 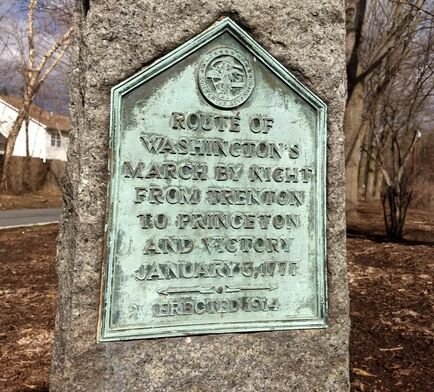 On January 3, 1777, George Washington and his troops passed through what would become Port Mercer 57 years later.⁴¹ Legend says that the contingent, unfamiliar with the area, were guided by an 18-year-old Irish Girl named Jinnie Jackson through a back road which connected to Quaker Bridge Road near the western boundary of present-day West Windsor.⁴² Washington and his troops subsequently moved on through Clarksville and Port Mercer, arriving in Princeton and winning a second victory in little over a week, turning the tide of the war, and the fate of the continent.⁴³
​
In 1914, 12 obelisks, each displaying a plaque commemorating this march, were installed along the historic march's route from Trenton to Princeton.​⁴⁴ 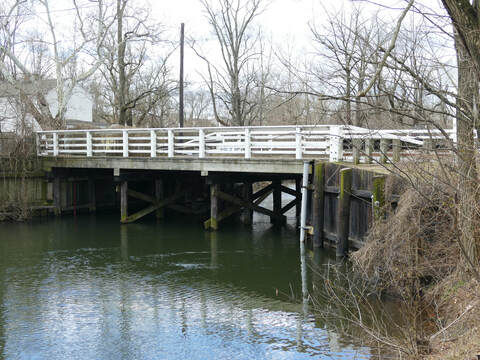 Much like the bridge in Princeton Basin, this construct swiveled on a pivot, functioning similarly to a drawbridge, albeit with horizontal displacement, not vertical. The bridge tender would be responsible for this rotation.⁴⁵ It is unknown when the original bridge was torn down. The current bridge, pictured, is instead a fixed construct.​​⁴⁶ 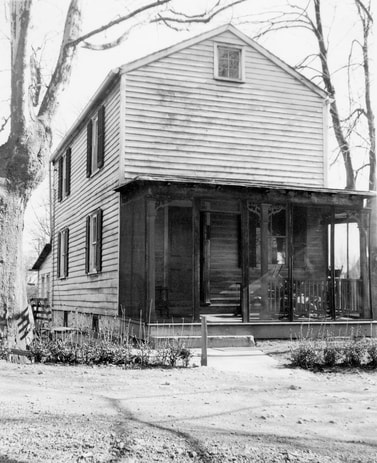 This building was constructed soon after the bridge’s opening.⁴⁷ The edifice was owned by the canal company, and the bridge operator lived rent-free as compensation for his duties in lieu of wages.⁴⁸ One of the earliest bridge tenders was the McGuigan family; after them, John Arrowsmith served dutifully from c. 1900-1934, who resided there with his wife and eight children.⁴⁹

In addition to collecting tolls, the bridge tender also served an important role in communications along the canal. Messages, passed by a long pole from passing barge captains to the tender, were then relayed to other vessels.⁵⁰ As traffic increased, so did the need for food, supplies, and entertainment.⁵¹ Thus, the tender served an instrumental role for both the community and the canal. He often-times slept in a nearby "shanty," so that he could answer any issues as soon as possible.⁵² This building was torn down decades ago.⁵³

​   The house is now on the National Register of Historic Places.⁵⁴ It belongs to the Lawrence Historical Society, who conduct tours of the building. 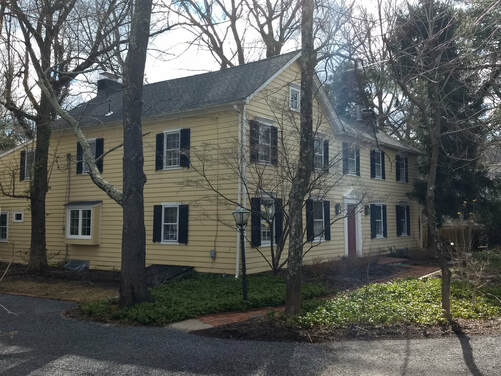 From 1840-1848, Alfred Applegate operated a general store in Port Mercer. John A. Crater reopened the same store. He also constructed the yellow house pictured here, which was later expanded and converted into an inn or tavern by Samuel Smith. Smith, in turn, leased the property to William West, also an erstwhile owner of the Clarksville Inn.⁵⁷

The inn catered to bustling canal traffic, and after the construction of the nearby Camden & Amboy Railroad through the hamlet in 1839, rail traffic.​⁵⁸ This railroad was later re-laid at its current location, now called the Northeast Corridor, which passes through Princeton Junction.⁵⁹ During happy hour, the inn would often provide heavily-salted turtle soup or clam chowder to incentivize the purchase of drinks.⁶⁰ While these revelers were occupied, locals would frantically board the barges and unload as much coal as possible.⁶¹

The inn also contained a dance hall on the second floor.⁶⁴ Town gossip said that “ladies of the night,” travelling north from Trenton on the weekends, often frequented this room. Reputedly, specialty grew so popular that it is rumored that more than one building was required to accommodate demand!⁶⁵
Play the slideshow below to explore more of historic Port Mercer!
Click here for citations!