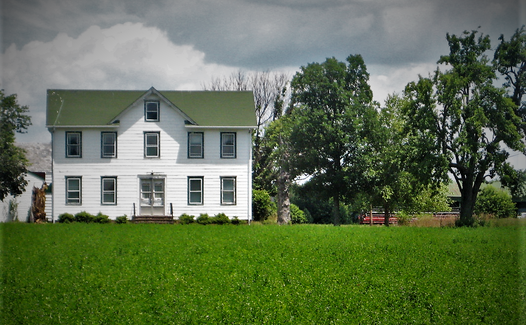 Long a fixture of Village Road East, Leroy Grover's farm is a local icon filled with memories. Located on a large stretch of agrarian land at the northwest corner of Village Road East and Southfield Road, the farm is a fixture of West Windsor. From its establishment until 2008, the farm provided work for local teens, U-Pick events for families, and countless memories for township residents. Moreover, the families that ran the farm are deeply entrenched in West Windsor's history. Although the farmhouse is gone and the aforementioned families are no longer operating the establishment, its history is well-documented, immortalized in the annals of West Windsor.
History

The farmstead dates back to at least the mid-1800s, if not earlier. An 1849 map of the Mercer County and the 1875 map of West Windsor show that the farm (100 acres in 1875) was owned by a "J. L. Hooper," whose family history is well-recorded in "West Windsor Then and Now." In 1876, the residence was reputedly enlarged by Sam Groendyke with an addition to the front part of the original ell.

Before West Windsor started coalescing around suburban development in the early 1980s, the property was considered a part of Dutch Neck. It supplied food - likely primarily potatoes - for the village and was a a fixture of the Hooper family for decades. In 1912, the Grover family - the same Grovers that acquired the mill at the intersection of Clarksville and Cranbury Roads 5 decades prior - purchased the property. The farm passed through generations of Grovers, ending with its ownership by Leroy C. Grover.
​ 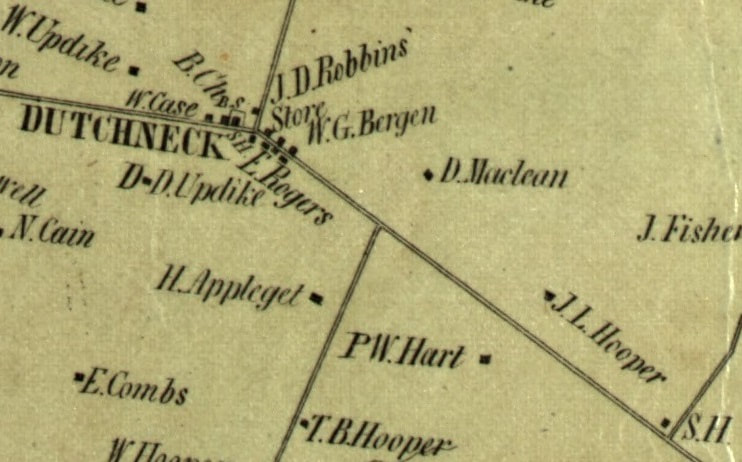 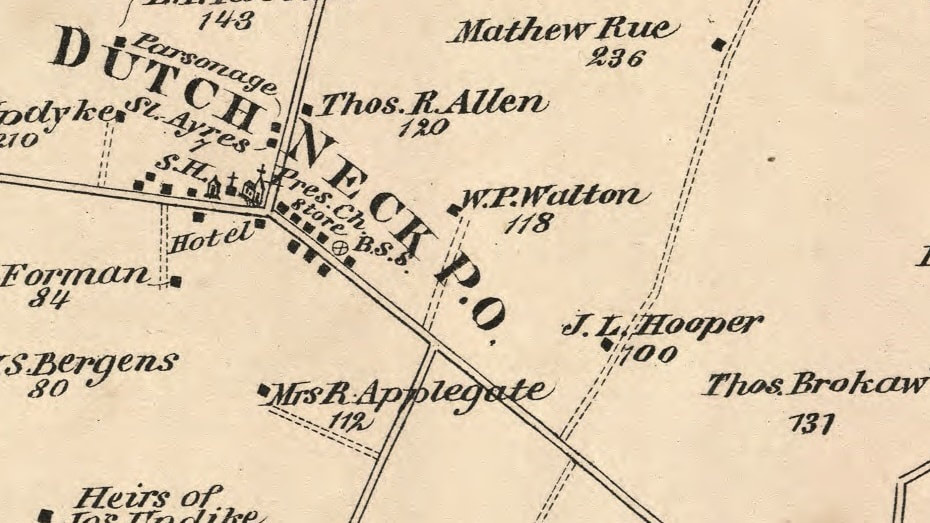 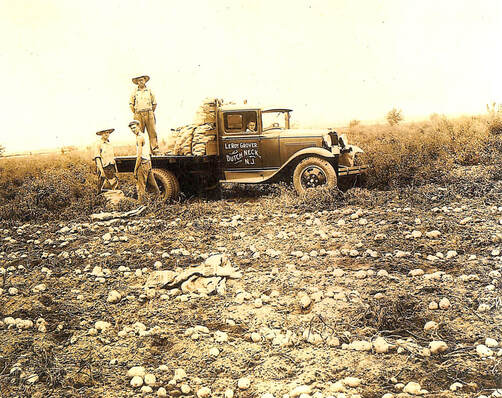 Harvesting potatoes c. 1930. On left: Sylvanus Grover. On truck: Leroy Grover, Sr. In Truck Leroy (Pete) Grover, Jr.
Pictures of the farm in the middle of the 20th century show an expansive field, well before the suburban developments of the post-war era. According to Leroy Grover when interviewed in 1988, cows were kept on the farm until around 1935, when milk prices decreased to $.03/quart; the farm then switched to potatoes. Before Leroy's death in 2008, strawberries, peas, and potatoes were the main crops. Before the 1980s, farmland stretched, uninterrupted, from Village Road East to Princeton-Hightstown Road. Leroy Grover, Sr. (the father of Leroy C. Grover) operated the farm before his son, managing a vast acreage of farmland.

Leroy C. Grover was an active member of his community. Born on the farm in Dutch Neck, he was a lifetime farmer and co-owner/operater of the Grover Farm with his wife, Florence. He opened his farm to U-pick events (where children and adults alike could pick strawberries, corn, tomatoes, and more), school tours, and barbecues for the West Windsor Volunteer Fire Co. Additionally, he was a member of the Dutch Neck Presbyterian Church, serving as a Deacon and Trustee.

One of Leroy's and Florence's children, Thomas R. Grover (born in 1946) served in Vietnam. Sadly, he was killed in battle in Phu Hoa Dong, Vietnam, in 1969. However, his service has not been forgotten; when a new middle school was proposed in the mid-2000s to accommodate a growing youth population, it was decided to name the institution the Thomas R. Grover Middle School.​
​
Leroy Grover, President of the Mercer County Farm Bureau was also a dedicated advocate for preserved farmland initiatives. In 1994, in order to limit suburban development, the Township instituted the first Municipal Open Space Tax in New Jersey. Their first acquisition was Grovers Farm. In August of that year, West Windsor purchased the property from Leroy and his wife, Florence E. Grover (born Florence Walter), for a price not to exceed $3,441,000, whereupon the property became the first designated open space in the township.

As per the purchase agreement, Leroy and Florence remained in the house, maintaining it as an active residence for 15 years. Mr. Grover passed away in December, 2008, whereupon Mrs. Grover moved out of the farmhouse in February 19 of the next year, executing a voluntary release of the life estate. The property has since been owned by West Windsor Township. 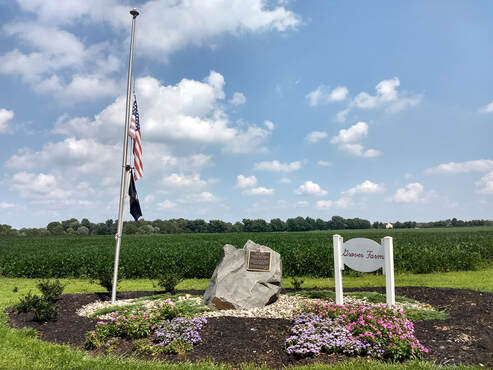 Memorial to Thomas at the farm's entrance
After Florence vacated the house, the structure - a familiar sight to many locals - began to deteriorate. Despite efforts to salvage the house - including a push by multiple community members for a volunteer-driven reconstruction of the edifice - the Township Council voted to raze the farmhouse on July 8, 2013. While the structure no longer stands, a few outbuildings - including a garage and several sheds - still stand and are being used by the property's current owners.

Despite the disappearance of the house and its family's relocation, the property is still farmed to this day. Representing an era of agrarian dominance in West Windsor, Grover's Farm continues to produce various agricultural commodities and evoke memories of a farm long a fixture of our township. 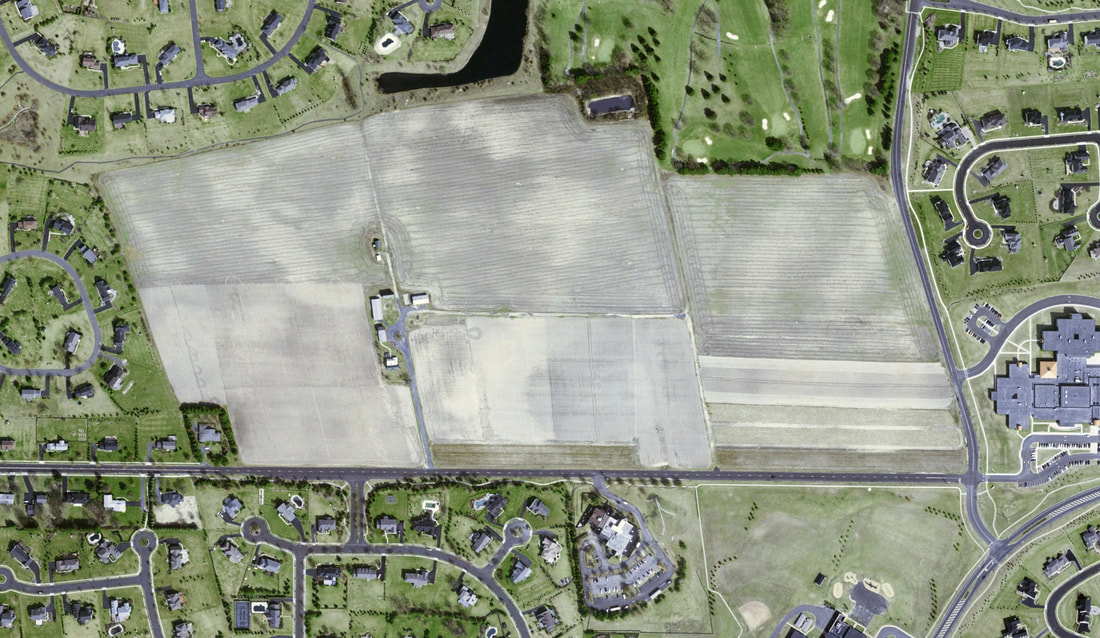