Georgiana Hauck (1901-1999) served as the Principal of the now long-gone Penns Neck School (constructed in 1917 and torn down in 1995) for 40 years until 1964. Her tenure saw the development of thousands of children during their formative years, and in 2019, some of West Windsor's longtime residents may still remember her. In 1983, the Historical Society of West Windsor (HSoWW) sat down with Mrs. Hauck to discuss her experience serving the Penns Neck School:
​ 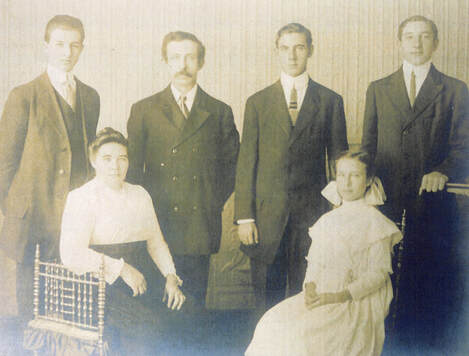 Georgiana Hauck & family
How did it happen that you became the principal of the Penns Neck School?
Mr. Arnold, the County Superintendent, was observing my class at the Alfred Reed School in Ewing Township. He asked me if I was interested in doing upper grade work. "We have a nice school and they have asked me to get them a principal, which would mean also teaching 7th and 8th Grades." I said, "It sounds very  interesting, and I would very much like to deal with youngsters at that age." Mr. Arnold recommended that I take half a day off and go out on the Johnson Trolley, switch to the "Dinkey" that runs from Princeton and get off at Penns Neck. The school was just a short walk from the Penns Neck stop. I did just that and looked over the school. I told Mr. Arnold I was interested. He spoke to the Board of Education; they sent me a contract, and I became principal and taught 7th and 8th Grades.

How many students attended the school and how many teachers taught there?
I would guess about 130 students all told. There were just four teachers. At one time later, there were six.

Looking at a report card dated 1929, which you signed as principal, it seems that the subjects taught then were quite different from today. For example, what was Physiology?
Hygiene, health, general cleanliness, how to take care of themselves properly, the need for regular bathing, not sneezing in someone's face, having a clean hankie, things like that.

HSoWW: Business Forms? What did that course cover?
It was everything: writing checks, writing business letters, such as letters of application if you were looking for a position. Of course, we did not have typing or things like that. We didn't have the equipment for it.
​ 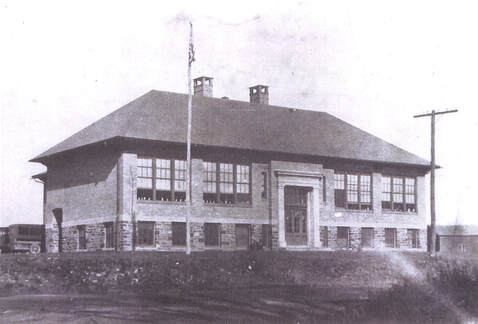 Penns Neck School
What about Civic Government?
It was called Civics also. Mainly, a discussion of local government; functions of local governments, police departments, etc. In all subjects there was a State Examination in 8th Grade which had to be passed before pupils could enter high school.

There was much more of a ceremony made of graduation from 8th Grade in those days. Would you tell us about the commencement exercises you had at Penns Neck?
After 8th Grade the children left the district to go to high school in Princeton. We used to have an operetta as part of the commencement. We would use an already written operetta and add things to it. We had no special music teacher, but we had students with beautiful voices and we were able to use them. The commencement was held at what was then the Penns Neck Community Club on Route One. We paraded the students, sets, and costumes across Route One to the Club for rehearsals. I would go out into the road and stop the traffic (there was no traffic light). The drivers would laugh and stop while the students crossed Route One. The commencement was held in the evening and the Club auditorium was always filled to capacity. The mothers and teachers made the costumes and we decorated the club with ferns and flowers. The Cranstons had lovely pink roses that were in bloom at the time of commencement and we would father the roses to make boutonnieres for each of the boys and bouquets for each of the girls. It was a very festive occasion. I have seen many lovely commencements since then, but they have not seemed as lovely as those.

What kind of careers were the children preparing for in those days? We're talking about pre-development West Windsor.
Most of the children at the time wanted to be farmers if their fathers had big farms. A lot of them wanted to go on to college. Some thought they wanted to be doctors. During the Depression girls thought of being nurses and boys thought of being doctors. They thought they would like to, but not really aiming toward them then. By the time I retired in 1964, development had begun, and we had more students whose families were not agriculture-oriented. Their fathers were businessmen or were teaching at the university. By then, a large percentage of the students planned to go on to college. 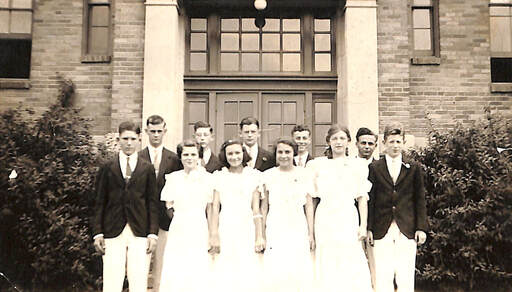 What did you do to celebrate holidays, and were any holidays celebrated then that are no longer celebrated today?
For Valentine's Day, the students would make Valentines. I made it my business to have a Valentine for each person so that no one would feel left out. I also stressed the fact that there were Valentines and "Valentines" and tried to make them feel how much nicer it was to use a nice Valentine instead of a nasty one. At Christmastime ,we would set up winter scenes at the top of the blackboards. The children would make things to take home as presents. I remember we made napkin rings one year. I also suggested that the children set the table for their parents at Christmastime as a present. Each Friday morning we had a general assembly in the auditorium with the usual "opening exercises" (the national anthem, flag salute, songs) and a short special program. Each week, a different class gave the program so that all the children had the opportunity to perform, as well as be in the audience. Parents attended. The Christmas program was a combination of all classes, and parents joined in singing carols. We didn't do much for May Day. As part of Drawing class, we would make little baskets to fill with flowers and hang on the doorways of friends and people who were ill.

What about field trips? Were any trips taken and to where?
Field trips were only to things within reasonable walking distance. I took the youngsters to see Mount's apple storage place. It was on Route One between Alexander and Meadow Roads. They had a big house and apple orchards. The specially-built storage place kept apples at near-freezing temperatures to keep them at their very best. Mr. Mount, who was president of the Board of Education at the time, gave me permission to take the children down to see it, and gave each one an apple. I also used to take the youngsters down to (Princeton Basin) to a big old tree in a field. We measured the tree when we were doing arithmetic work on circumferences, diameters, of circles, etc. We usually had a picnic at the end of the year. Other than that there were no field trips.