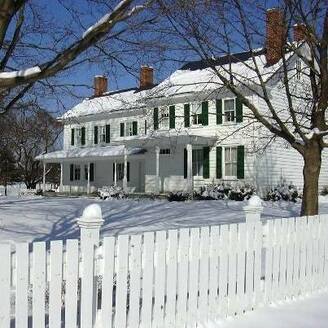 As a lifelong resident of West Windsor, I've always enjoyed travelling down its historic roads, visualizing its past through the centuries-old edifices that dot the township and cluster into small villages. Each site holds the memories of residents long gone - inhabitants who lived lives as full and nuanced as our own. An embodiment of this sentiment is one of my favorite intersections, that of Village Roads East and West and South Mill road, all of which traverse Dutch Neck, the geographical heart of West Windsor. This single avenue - through the architecture of the houses, barns, and churches that line the street - reveals the agrarian lifestyle that dominated West Windsor prior to the second half of the 20th century.

Motivated by my passion for architecture and a romanticism of exploring and preserving my hometown's history, I spearheaded a project between 2009 and 2011 to memorialize the story of West Windsor. This endeavor is a permanent self-guided bicycle tour that utilizes existing roads, sidewalks, bike lanes, and easily-accessible historic sites to provide a convenient route for anyone interested in exploring the history of West Windsor by bike or on foot.  The tour aims to impart an understanding of the economic and cultural development of West Windsor over its 221-year history. Enjoy exercise along the way and gain a feeling of what it was like to live in West Windsor throughout the centuries!