Thank you to Karen Yang for her research on this property. 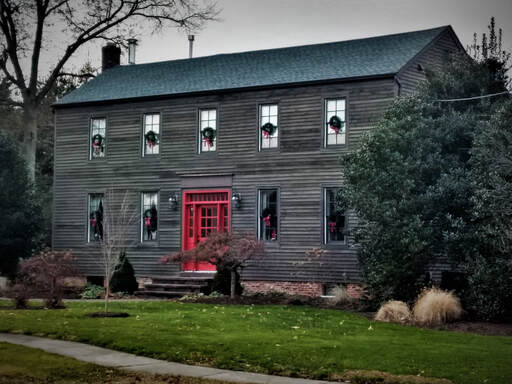 A house similar in design to 221 Southfield Road, 105 Southfield Road is a close distance to Bear Brook, one of West Windsor’s most enduring water ways. Although township tax records claim a date of construction of 1930, this house is likely far older - possibly dating back to the first quarter of the 19th century or even earlier.

Its first known owner was Elias Bergen, who appears on an 1849 map of West Windsor at this location. Bergen was a farmer and huckster born in 1808 in New Jersey, the 7th generation descendant of Hans Hansen Bergen, an early Dutch settler to New York. His parents were John J Bergen and Mary Mershon and he was christened at First Presbyterian Church in Cranbury, in Jan 1809. The Bergen family resided in this house for twenty years, from 1850 to 1870. Bergen would live in the New Jersey area for all his life.

Records also note in 1860, Bergen’s real estate value was worth $10,000 and he had a $2500 value of personal real estate. Similarly, a large entourage of servants lived with the Bergens as well. These included Mary and James Wilson, mother and son who served with the Bergen family until their move in 1870. Other servants in 1850 included Robert Wilton, a 20 year old laborer and William Sullivan. In 1860, other than Mary and James Wilson, new servants, Joshua Ely and Mary M Rue resided on the property. In 1870, once again, with the exception of Mary and James Wilson, new servants arrived, such as Williamm Hendrickson, a 19 year old bookkeeper, Joseph Fisher, a 19 grocer, George E Hill, a 24 year old railroad clerk, Alfred Titus, a 22 carpenter and Jenny Nunemaker, a Pennsylvania-born 17-year-old servant. 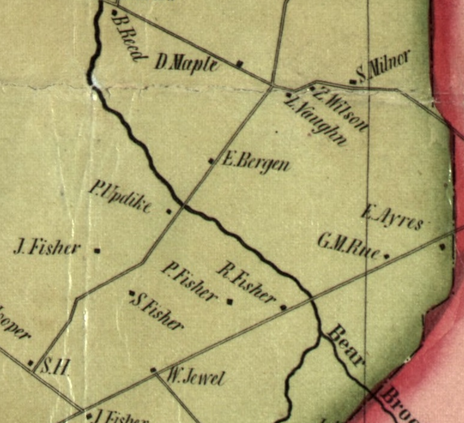 1849 map of WW; notice "E. Bergen"
Some time between 1870 and 1873, the Bergen family moved out of 105 Southfield Road and into Trenton’s East Hanover Street. Around 1877, Elias Bergen and his son, Gilbert, founded a produce business, “E Bergen & Son.” According to the Trenton City Directories, they sold vegetables, butter, and eggs. They were classified as “green grocers,” working in the city market. After Elias’ death, Gilbert and Henry founded the “Bergen Brothers Produce firm” where Gilbert was a produce dealer and Henry worked as a shipper. Henry later became a salesman by 1894 and then a shipping clerk by 1896. Finally, he would have a transferral to the Trenton Brewing Company. By then, Gilbert had continued the business himself, selling wholesale produce, foreign fruits, nuts. Elias Edgar, the third brother, also worked in the produce dealing department as a “commission merchant,” as listed in the 1905 census. Later on, he would be considered a “Wholesome Fact Merchant” in 1920 and as an employer.

Following the Bergens’ removal from their Southfield Road property, the family of William Duncan moved in. In 1880, Duncan (1847- unknown), a New Jersey native, was listed as a 33 year old farm laborer in that year’s census. Additionally, Duncan had another distinction -- living as a Black resident in West Windsor, then predominantly white. He was also educated, despite his parents’, Issac Duncan (1820- unknown) and Harriet Dewees (1829- unknown), background of illiteracy. Furthermore, Duncan was instrumental to the community, acting as an “Overseer of the Roads” in 1879, helping to maintain West Windsor’s main transportation arteries.

In later 1905 and 1918 maps and tax records, the house and land was listed under ownership by Albert Chamberlain, although records remain hazy about the details of his life. From then, it passed through a series of other residents and remains a privately-owned property; a memorial to West Windsor’s past.